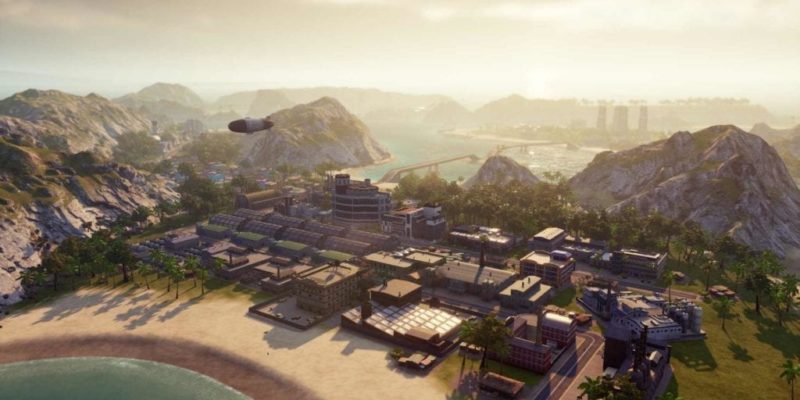 For your island nation to be taken seriously in Tropico 6, you need to make money fast. Having cash in your country’s treasury (and your secret Swiss bank account) gives you the power to shape the nation however you see fit while competing with the world’s superpowers. So, you need to raise your fortune as quickly as possible. Here are some tips on how to swiftly raise cash so that your island will thrive.

But before we get started, you should know that these tips won’t be appropriate for every play style. Getting rich quickly means angering a lot of people, so you’ll have to manage that aspect. But if you don’t mind a little bit of underhandedness, then your treasury will be overflowing in no time. 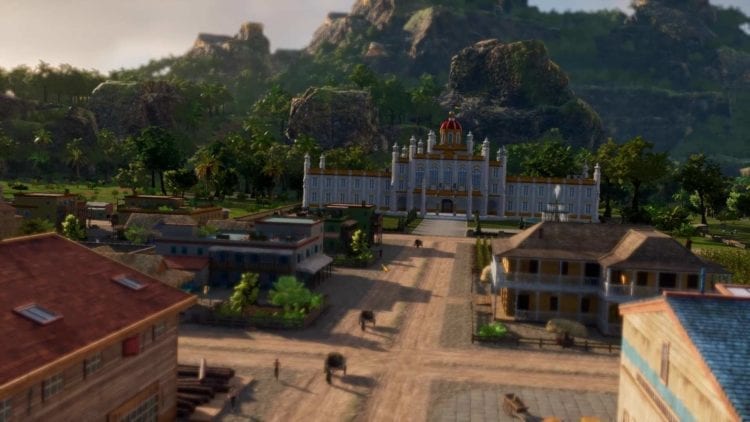 Crops and farm animals are fine for feeding your people, but they don’t bring in much revenue unless you turn them into refined goods. Similarly, setting up a Fisherman’s Wharf will get you food, but fish aren’t worth much unless you can them. Your main task is to establish industries for trade. Fortunately, some of the most valuable finished goods remain at the top of the list for most of the time periods leading up to the Modern Times era.

The most profitable basic industries are:

Boats are consistently the most valuable commodity in any time period, but they’re a little tricky. You’ll need to set up multiple Logging Camps with at least one Lumber Mill and a Shipyard. But you can’t rely too heavily on boat building to back your economy. Even with the building’s efficiency maxed out and supplied with plenty of materials, a Shipyard will still churn out boats at a relatively slow pace. So, you’ll probably need to diversify. 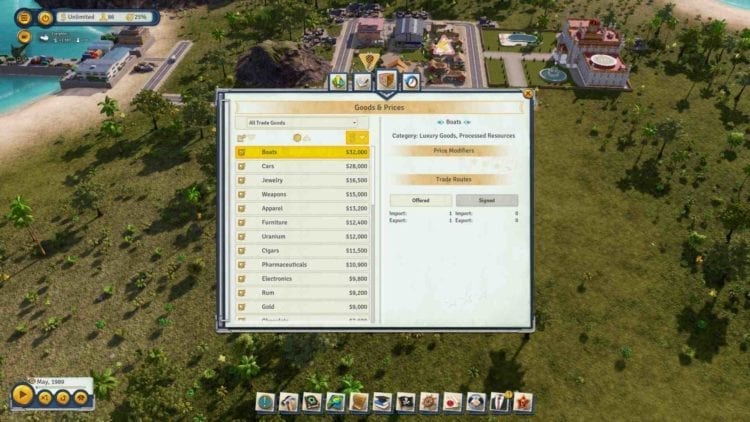 List of most profitable trade goods in the Modern Times

Rum and cigar industries are much easier to establish. You’ll need to find the right spots to put your sugar and tobacco plantations, but you’ll have extremely profitable industries once you do. Distilleries and Plantations are automatically unlocked, so you get to rum running right away. You’ll need to get workers to their job sites quickly, preferably by building houses nearby, so plan your infrastructure carefully. Otherwise, your workers will waste precious time walking to work each day.

Keep an eye out for gold deposits, since this resource always sells for high prices no matter the era, and the only building you need for it is a Mine. Volcano islands usually have gold on them.

If you start at an early era, you probably won’t need advanced industries like car, jewelry, weapon, plastic, and electronics manufacturing later in the game. If you start in Modern Times, having them is certainly worthwhile, but they have high upfront costs and rely on non-renewable resources. Apparel may be a better way to go since leather, wool, and cotton are all renewable and cheap to produce.

It’s impossible to overstate how important the Pirate Cove is to the economy in Tropico 6. It should be one of the first structures you build when starting your nation. When it’s up, immediately set out on a heist to steal the Registan of Samarkand, which will instantly give all the children of Tropico the equivalent of a high school education. A huge percentage of the population will immediately be able to enter the workforce without spending years attending school. 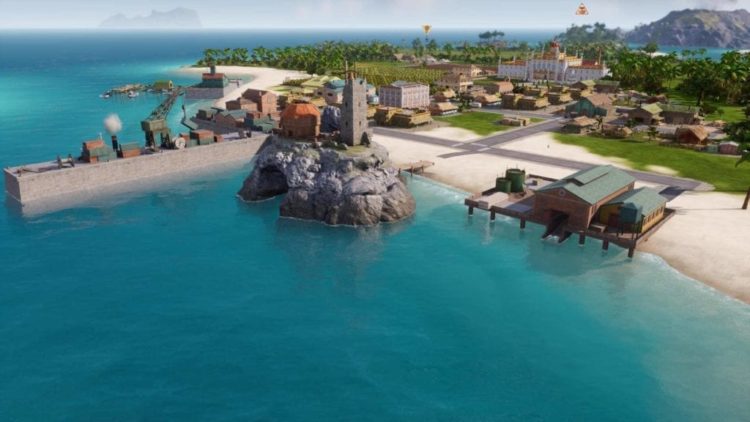 However, that doesn’t mean that you shouldn’t have a high school, since it takes a long while to pull off the heist. Afterward, you’ll need $10,000 to place the wonder on your island. In the meantime, you have factories and fire stations that need employees.

Once the heist is complete, the Cove may continue to contribute by acquiring resources. We recommend setting it to repeat raids such as “rescuing” people to join your nation, acquiring gold, and going on treasure hunts. That will supplement your economy with workers, resources, and some extra money. 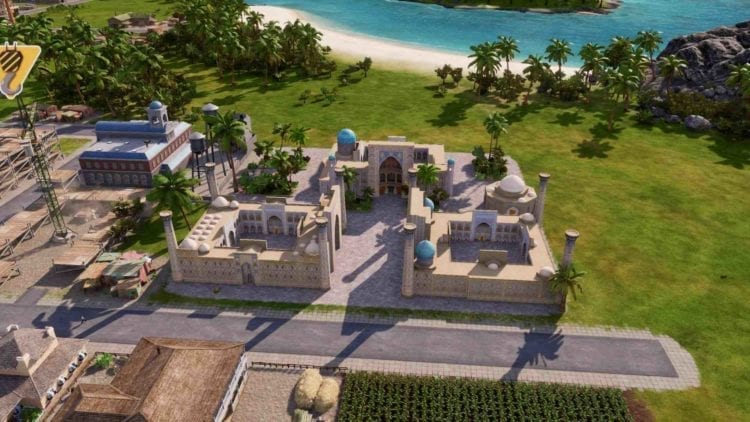 Steal the Registan of Samarkand as quickly as you can.

Another important World Wonder is the Ahu Akivi Moai Heads, which make your boats move faster. You can steal using the Commando Garrison.

Once you have a nice flow of goods, it’ll be time to seek out lucrative trade deals with the world’s powers. Trade route revenues in Tropico 6 are tied to your political relations. The better they are, the higher the returns will be. There won’t be many profitable deals to be made at first, so start with some short-term trade contracts to improve relations. It’s ok to take export deals that have no value above the base price. You’ll be improving relations with the nation by breaking even. Just try not to lose money on trade deals unless you have to.

Later on, structures like the Customs Office will help augment trade prices while Embassies will provide options to improve international relations.

As your relations with foreign nations improve, you’ll start to see import prices drop to below market price. Keep a close watch for big-ticket items such as weapons, boats, cars, and gold. Then sign on long term contracts to acquire them below their base rate. It’ll save you the trouble of having to build the infrastructure needed to create these industries yourself. These deals may be maximized by signing a second contract to resell the imported goods at a higher profit.

Keep in mind that trading goods is a slow process, so you’ll have to supplement your income in other ways. Most importantly, build a second Dock so that you can maximize your flow of goods.

Some of the most profitable edicts include Church Fee, Penal Colony, and No Free Lunch to exact some extra cash from your citizens. Each come with some significant drawbacks, but they’re worth it if you want a fast thriving economy.

For example, Penal Colony will bolster both your immigration rate and income, but you’ll end up with a lot of criminals. However, there are numerous ways to overcome that issue while still making a huge profit, especially by building prisons and setting them to do Convict Labor. In later eras, you’ll be able to profit even more off the justice system. 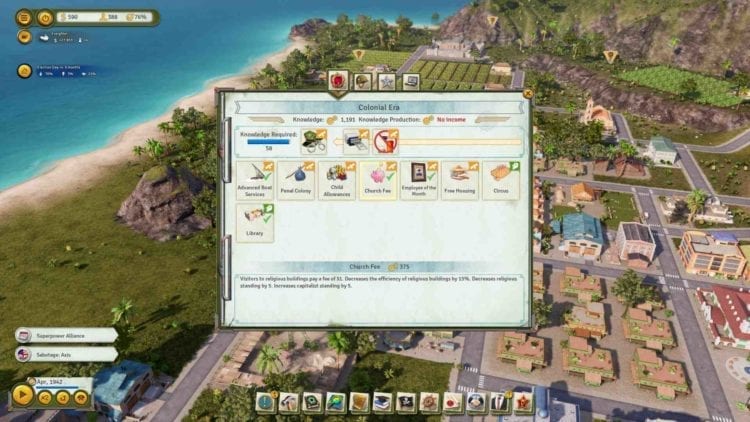 Edicts from the Colonial era.

Your economy can be further bolstered with the Advanced Boat Services, Employee of the Month, Tax Haven, Speedway, and Caribbean Trade Pact Association edicts. But they all incur running costs. The Industrialization edict will temporarily cut the cost of industrial buildings, but you should only need to execute it if you’re planning a massive expansion.

You’ll need to pay extra attention to housing because people living in shacks don’t pay rent. Build Bunkhouses and strategically place them near work facilities. Dropping one or two right next to your Mines and Logging Camps along with a Tavern to keep them entertained saves time and money in the long run. 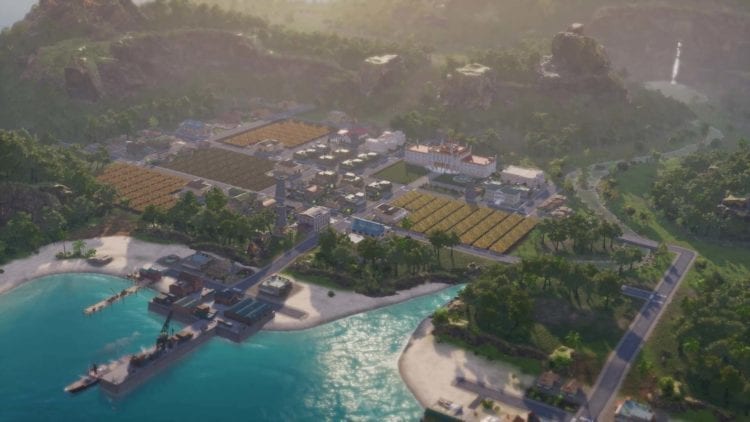 Just remember to set the efficiency investment all the way down for all your Bunkhouses. That way, they won’t be as much of a drain on your economy. Your housing happiness will decline, so you’ll need to compensate for it in other areas such as food and entertainment, which will both bring in profits. But don’t set the Bunkhouses to overcrowd because it sets the rent to zero.

Beneficial buildings include Banks, which help earn interest on the nation’s treasury, but having more than one has diminishing returns. Offices in the Modern Times will bring in revenues according to different settings, such as the total number of people employed in your country. Offshore offices will host a foreign company on your island. Both Office types can be augmented for further efficiency using the Tax Haven edict.

Set your Newspaper, Radio, and TV buildings to pull in additional revenue from citizens, but be aware the television broadcasts can only reach homes that have electricity. Radio, which reaches people at their workplaces, does not have this limitation. At the same time, having “Paid Healthcare” as your Healthcare policy is beneficial if you have a lot of healthcare buildings with enough rich citizens to pay for care.

Employ these Tropico 6 strategies and you’ll make your first million in no time. May your reign as El Presidente be a long and wealthy one!