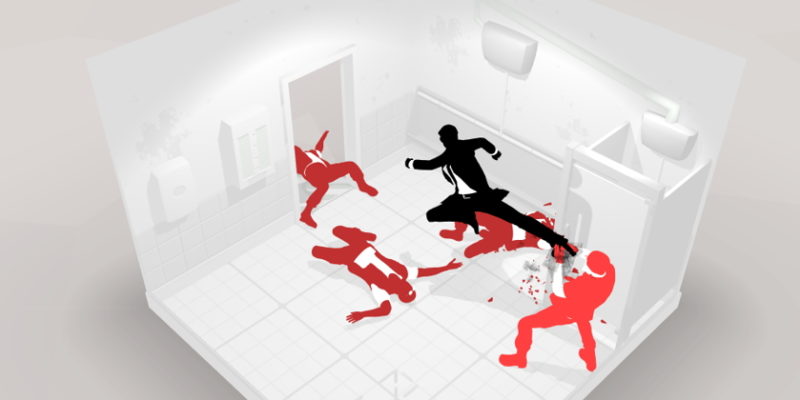 Cards and tactics often go together as beautifully as chocolate and peanut butter. Or chocolate and strawberries. Or chocolate and my mouth. Maybe I just want chocolate? Anyway, ask the makers of games like Slay the Spire, and they’ll likely harp on how well cards, tactics, and weapons coalesce. But what about cards and feet? That’s what developer Ground Shatter will attempt to find out with Fights in Tight Spaces, a card-building brawler in, well, tight spaces.

But that’s where said comparisons end. Fights in Tight Spaces uses an overhead camera to show the action within the narrow confines of its levels. You give a black-silhouetted main character a command from a handful of action cards such as heavy strike, swap, or grapple, and watch the action take place. It’s certainly a violent game–the camera pans close as elbows connect to noses, resulting in a shower of blood.

Fights in Tight Spaces is all about the brawl, but the game does present other challenges. Blending deck building and turn-based tactics, you are given goals in each room. Granted, most are accomplished by cracking skulls, but at times you’ll need to also prevent an ambassador from getting killed. From the above trailer, it also appears there will be “boss” enemy types with a darker color and a higher level.

There will be more than 150 cards to add to your deck. Naturally, you’ll need to be clever when creating your deck, as it’s not just about how often you hit, but how to manage the fight itself.

Some cards allow you to dish out damage, others let you push enemies or swap places with them on the board. For example, by positioning one enemy behind you while another is ahead, you set them up for a deadly split kick.

Fights in Tight Spaces is coming to PC later this year, and you can check it out on Steam right now.

Bill Gates steps down from Microsoft’s board

By Jake Su27 mins ago
Industry