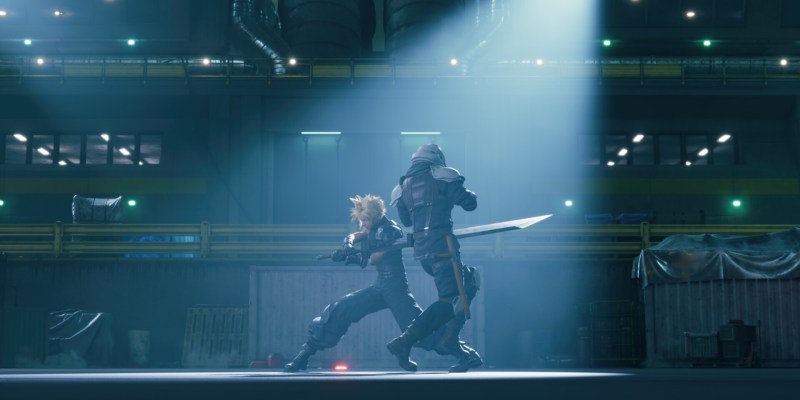 Looking at it from a financial and fan service angle, Square Enix returning to the well of (arguably) its most-loved game makes sense. Fans get to spend dozens of hours diving deeply into a world they’ve been enthralled with for decades, and Square Enix gets to sell them multiple highly-anticipated games. There’s no worrying about whether anything will resonate with players or catch on. This is already a proven thing. Of course, it all depends on the product being good. Final Fantasy VII Remake Intergrade isn’t just good, though — it’s fantastic. So that’s the best way to shut off any internal brain alarms.

Part of me wants to just do a normal review for this game. I could talk about my feelings regarding experiencing this story with so much added detail, or battling through classic enemy encounters while using astoundingly rendered versions of characters I’ve loved for most of my life. I’ll do some of that, but this game already has nearly 200 professional reviews, and has sold over 5 million copies on PlayStation 4 alone — less than half a year after its release. It could easily have sold over 10 million copies at this point. The general consensus is, of course, that the game is well worth it despite effectively only covering an early section of the 1997 original.

Yes, Final Fantasy VII Remake Intergrade is just the beginning of FFVII, but it still takes 30-40 hours (and that’s not counting the included DLC episode). All of which features some of the highest quality visuals and gameplay you’ll find anywhere. It’s hard to be mad about having to wait when the prospect of the results being this high-quality is there to tempt us. Granted, the game’s pace can be slow, but I appreciate this, as it really lets the setting and characters breathe in a way they weren’t able to before. The result feels like a very intimate experience, which is exactly what I think it needed to be. 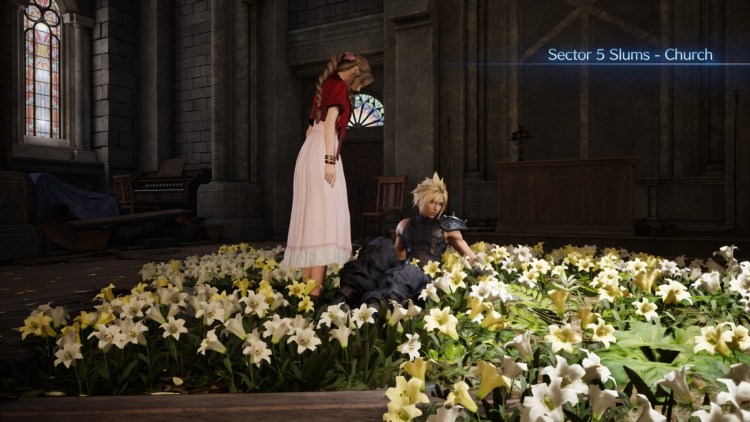 As this is a review for a PC port of the PlayStation 5 version that came out six months ago, which was, itself, a port of the PS4 version that was released over a year prior, you’re probably most interested in learning how well it performs. The game looks every bit as good as the PS5 version, albeit with the ability to play it at higher framerates. Playing the game at 120 fps is an exorbitant visual treat. It makes me think it’s a damn shame that we were stuck with a 30 fps cap for so long.

The install size is intimidating, however, as the game requires a 100 GB of storage space. It’s about the same as the PC version of Final Fantasy XV from years ago. And honestly, Final Fantasy VII Remake Intergrade‘s PC port has a fraction of the options found in FFXV. That game had a lot going on. But here? We only get textures and shadows. It’s very curious, that’s for sure.

On the other hand, the game is so gorgeous that I’m not extremely concerned about it. Though I’m positive fans will go digging through settings to get even more out of the game with a large degree of expediency.

As this is a port of the PS5 version, it also includes the Yuffie Intermission DLC by default. That can be accessed from the menu and played before even touching the main game, if you so choose. Also, if you wish to change voice tracks, be advised that it requires you to close the game and open it again. 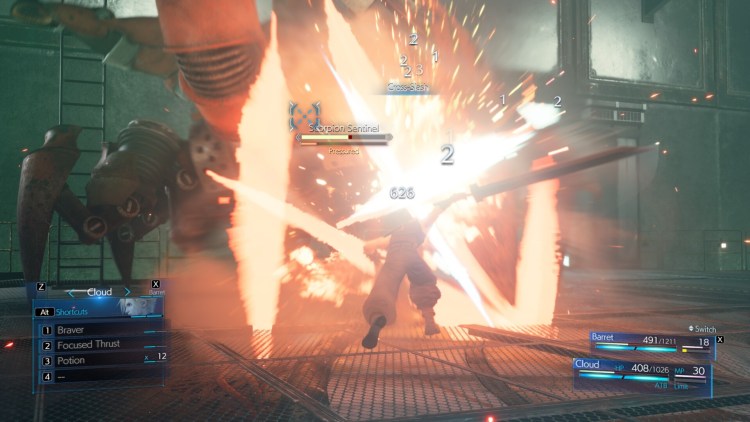 Personally, I can’t stand to play this game with the English voiceovers. It’s got a cast of established screen actors, but it still sounds like an anime dub. Barrett also gives the impression that his actor was shown clips of Robert Downey Jr. in Tropic Thunder with a note that said, “just do this.” It doesn’t help that Final Fantasy VII Remake Intergrade‘s cutscenes are insanely Japanese, from the comedic timing down to general tone. Whenever I play this game in English, I simply can’t take it seriously by any means. In Japanese, though, it feels pitch-perfect to me.

This is, of course, an extremely granular look at the story of Final Fantasy VII. If you’ve played the original but not its remake, think of it as if someone took the classic game and used it as an outline before filling in hours and hours of details. Only, something’s different. Hmm. Final Fantasy VII Remake Intergrade is quite linear, but so was the Midgar section in FFVII. There are, however, instances where sidequests pop up, and you can choose to do them if you wish. The game also does an excellent job of letting you know that you will miss these things if you move on, which makes it hard to lose out on anything if you’re looking to see it all. Plus, you can always go back once you replay the game in hard mode (complete with different enemy strengths and arrangements) after finishing the story.

Despite the much slower pace, I greatly enjoy the narrative and characters here. The game is super duper anime, though, so there’s a certain amount of tropeyness to the character portrayals that will irk some folks. Then again, the original game was also guilty of that.

The way the remake goes from cutscenes to gameplay and back again is even more engrossing at higher framerates, especially considering the absurdly high quality of them. 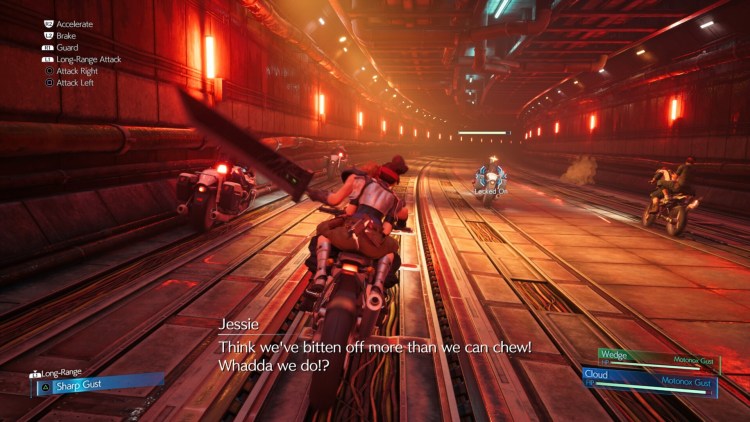 The gameplay is fantastic. It combines fluid, satisfying hack-and-slash with the necessity of issuing commands to your two allies, as Final Fantasy VII Remake Intergrade is designed to keep some of that classic gameplay loop intact. Cloud’s sword slashes tear through the air with reckless abandon, Tifa is an absolute powerhouse, Barrett’s gun attacks are blinding to the point that I can’t see whenever he attacks anything, at least until he gets access to weapons with melee attacks later on, Aerith has a ton of MP, and you still can’t play as Red XIII (which is understandable, since he shows up so late in the story). The ATB from the classics gets replaced by ATB gauges that increase over time and as you do damage, which can then be used for abilities and items.

The combat is a blast. Although I do hate the “you got stunned for a super long time and now the enemy will use an extremely damaging attack on you” stuff the game likes to trot out.

I could honestly ramble on about this game for an indefinite period of time, but you probably get the picture. If you haven’t gotten to experience Final Fantasy VII Remake Intergrade yet, you should definitely play it on PC. That way, you can join the rest of us in grinding our teeth as we await even a trickle of news about the next entry. Unless you’re really bothered by the odd additions to the game (I really shouldn’t get started on that), but this is Nomura we’re talking about, and things are bound to get kind of squirrelly from time to time.

Hopefully, I’ll be rambling to you about the Gold Saucer the next time I talk about this series. Great, now I’ve just made myself worry about how much longer the game will take to make due to the world map. See you in 2031. That’s probably only gonna be the second of three or four games anyway. 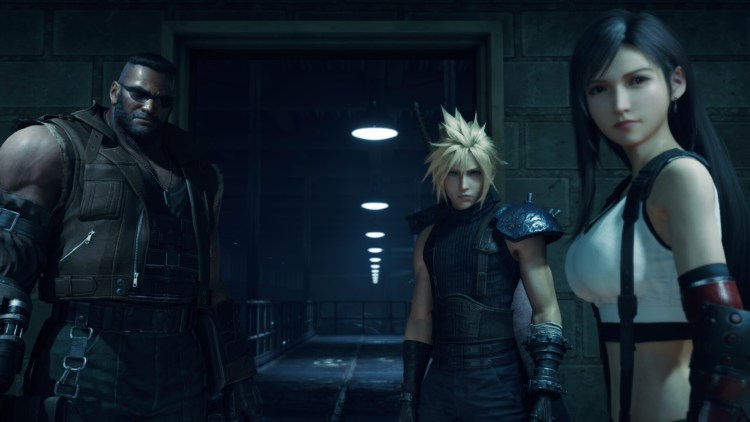 A port surprisingly free of graphics options still benefits from being the most jaw-droppingly gorgeous way to play an amazing game.

The Gunk review — Not as filthy as you’d think