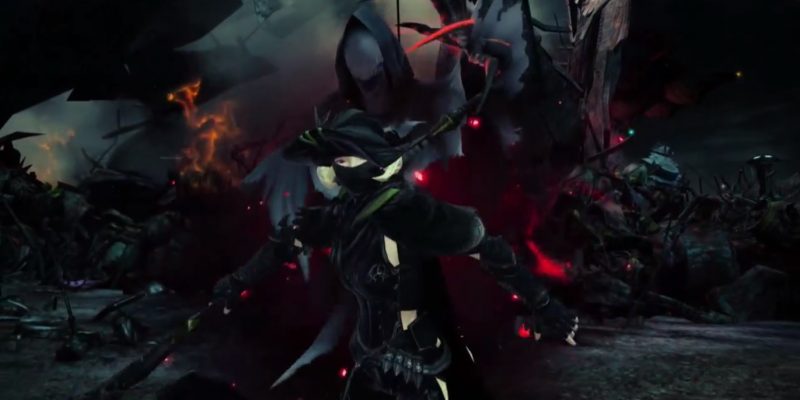 The second new job for Final Fantasy XIV: Endwalker has been announced as the Reaper. Hinted at in the trailer, hinted at further by Naoki Yoshida walking onto the stage in full costume and carrying a scythe, and then announced in quick succession.

Not a necromancer, then, but this two-handed scythe-wielder will still be using dark powers to take on foes.

To balance out the other new job (the healing Sage), the Reaper is a melee DPS class that will use the same armor types as the Dragoon. Its primary weapon is, naturally, the two-handed scythe. And as with most of the recent new jobs, you won’t need any particular job to unlock this. You’ll just need to have the Endwalker character, and a a job at level 70, which is where this class starts. You’ll be able to pick this up in Ul’dah.

The main damage source for the job is indeed the scythe, but that’s not the only method the Reapers can use to bring the pain. They can call an avatar from the Void to join in combat, and can even serve as a host for that avatar, channelling the Voidsent’s power for their own.

The plan was to create something unique and original, and… well, this certainly isn’t much like the other jobs I’ve seen. I’m not certain if the Voidsent will actually count as a “pet” or if it’ll just be used for specific attacks, but I’m looking forward to seeing more. You can check out the Reaper in action below.

To the surprise of many, this is a completely original job that hasn’t appeared in any other titles — not Final Fantasy III, V, or even XI. This is 100% brand new to Final Fantasy XIV, and while there are plenty of older classes I’d love to see? This is still looking pretty neat. I cannot wait for this to become the new Dragoon and/or Samurai that will be standing in every AoE possible.

Zenos will be taking up the scythe in the second part of patch 5.5, according to Yoshida-san, which hints that we may be facing off with that foe again sooner rather than later.

The Final Fantasy XIV Digital Fan Festival 2021 is going on right now, but I’ll be bringing you all the details as they happen.