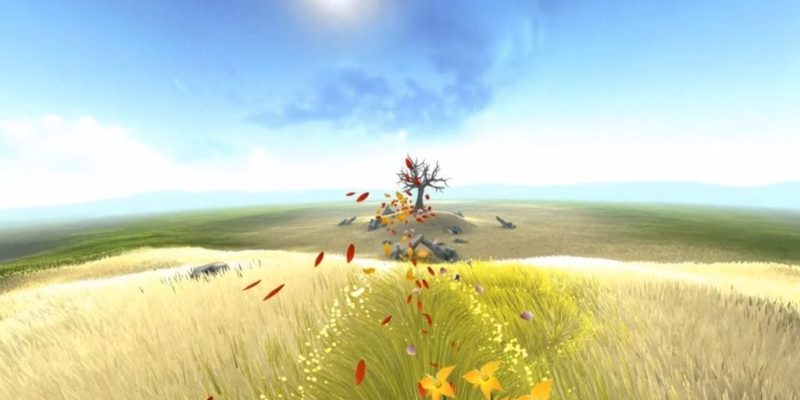 In celebration of its 10-year anniversary, Thatgamecompany and publisher Annapurna have brought Flower to the PC. The award-winning little game was first released on the PlayStation 3 back in 2009.

Flower is a relatively short but beautiful little game. Actually, it would probably be more accurate to call it a very successful tech demo. The game utilized the PlayStation 3 motion controls, which were fairly new and fancy for the time. Titling the controller, you could change the direction of the wind to gather flower petals.

By gathering enough petals and taking them to certain spots, you breathe new life into the landscape. Dry, yellow grass fills with green as the blades dance in the wind. New areas open up as you fill the world with color. You could put the game away in an afternoon, but you’ll find it hard to forget the sweeping music and hills sparkling with color.

Flower isn’t the first game from Thatgamecompany to hit PC. The developer’s first game, Flow, has been available for some time. We’re also still waiting for the company’s arguably more famous game, Journey, which is coming soon to the Epic Game Store. It’s currently developing a new game, called Sky, but sadly that one looks to be a mobile exclusive.

Thatgamecompany has made a name for itself in short, visually arresting, and gorgeous indie games. Many of its releases have been nominated for awards. Flower itself walked away with a couple “Best Indie Game of The Year” awards back in 2009, while also nabbing some nominations for its sound design and musical score. Much deserved, too. Its calming soundtrack and soft visuals certainly are relaxing.

If you want to check out Flower yourself, you can pick it up via the Steam store or Epic Games Store today. Also, as it’s going for only $6.99 USD, it certainly won’t be much burden on your wallet.