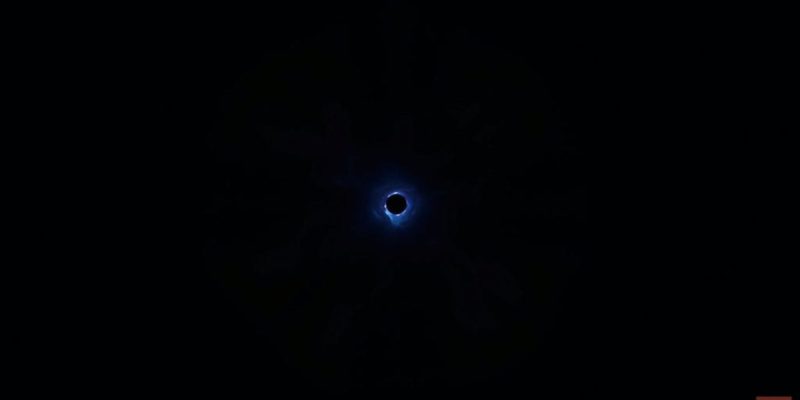 Millions of players logged into Fortnite to watch the end of Season X earlier today. They never could have guessed they would watch the entire game get sucked into a black hole. Since then, one of the biggest games in the world has been unplayable. It’s an incredibly brave marketing stunt they’re trying, but one that’s got everyone talking about the game.

The end-of-season event kicked off with a rocket being launched into a rift above the Fortnite island. Moments later tons of rockets were zipping between the rifts. Eventually, they all plunged into one directly below the giant meteor hovering in the middle of the map. The meteor then escaped whatever field was holding it in place and plunged into the rift after the rockets.

Everything seemed to settle down after that, but then some type of rocket shot out of a rift and crashed into the shield over Loot Lake. Players were launched into the air, high above the Fortnite map. As they floated weightlessly in the sky, they had a moment to ponder their situation before the meteor returned and plummeted into the same place as the rocket. And then everything and everyone was sucked into the same spot, vanishing in a final flash of light.

And so endeth Fortnite

Then the black hole appeared. At the same time, Fortnite’s Twitter account deleted all its tweets except one: a link to their stream of the black hole. The game’s website is also gone, replaced with the same stream. Since then, thousands of players have been watching the black hole, wanting desperately to find out what’s next for Fortnite. The game is currently the most-watched on Twitch, way over double the number of views of the next closest game. Check out the video below to relive the final dramatic moments:

Players who didn’t manage to get into the map for the final event still got their end-of-Fortnite-days experience. It wasn’t as dramatic as being launched up into space and watching a meteor obliterate the map, but it is still quite unsettling to watch all the menus and your character disappear.

Speculation about what’s next for Fortnite is rampant on social media right now. People are wondering if this is the launch of rumored Fortnite Chapter 2. Is it a new map coming to the game? Some even suggest Fortnite is dropping the mic and heading out while they’re on top. But that’s definitely not happening. There has been some mild panic from people who have spent loads of money on the game, but they have been assured that their cosmetics and V-bucks have not simply been sucked into a black hole.

What you can do in Fortnite right now is enter the Konami Code while watching the black hole to play a 2D Space Invaders-esque minigame. If you’re unfamiliar with the Konami Code, the sequence is: up, up, down, down, left, right, left, right, B, A (start). You can use the arrow keys on your keyboard if you’re not using a controller.

The pinnacle rewards system in Destiny 2: Shadowkeep is a frustrating mess

Felix the Reaper review for PC — Death and puzzles

By Lauren Sayles50 mins ago
Guides