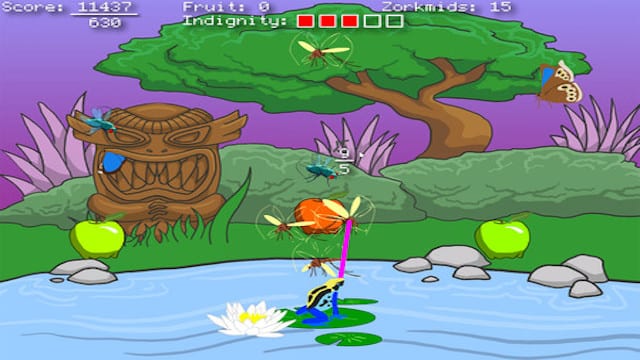 It’s been an internet sensation since its initial browser-based launch in 2012. And now, Frog Fractions is set to arrive for its biggest audience yet — Steam.

Today on Twitter, Jim Crawford, founder of Twinbeard, confirmed that the cult classic will come to the storefront this year. In fact, it’ll get a special Game of the Decade Edition, making it froggier than ever.

Not your usual “edutainment” experience

The tweet is below, showcasing the official logo but not revealing too much about what makes the game so magical.

Frog Fractions: Game of the Decade Edition is coming to Steam soon! Every time you wishlist, a frog gets her wings.https://t.co/dTKeMZfIE6

In addition, the Steam page is also up, so players can wishlist it. And boy, should they.

To describe Frog Fractions would really spoil what the game is all about. But in a nutshell, it’s all about a frog that sits on a lily pad, using its tongue to fend off oncoming insects while protecting fruit. To say things get pretty nuts is an understatement, particularly with the power-ups. This may be one of the few occasions where players can actually use lock-on targeting to get a better grip on enemies. Oh, and there’s a cybernetic brain, a flying dragon, and, according to the game description, mild sexual references. Yes, in an “edutainment” game.

There’s a reason that Frog Fractions has been a cult classic over the years. And once it finally makes its debut on Steam — sometime in mid-to-late 2020 — many of you will see why.

If you do require a little more background on the game before you invest in it, Noclip has a great documentary. We’ve included it below, but be prepared to have your mind blown from what’s to come. This isn’t your typical game of adding and subtracting. Did we mention the cybernetic brain? It’s a thing.

For those that can’t wait to indulge this goodness, Frog Fractions is also available on Twinbeard’s page.

Warcraft III: Reforged is finally available, and here’s what you need to run it