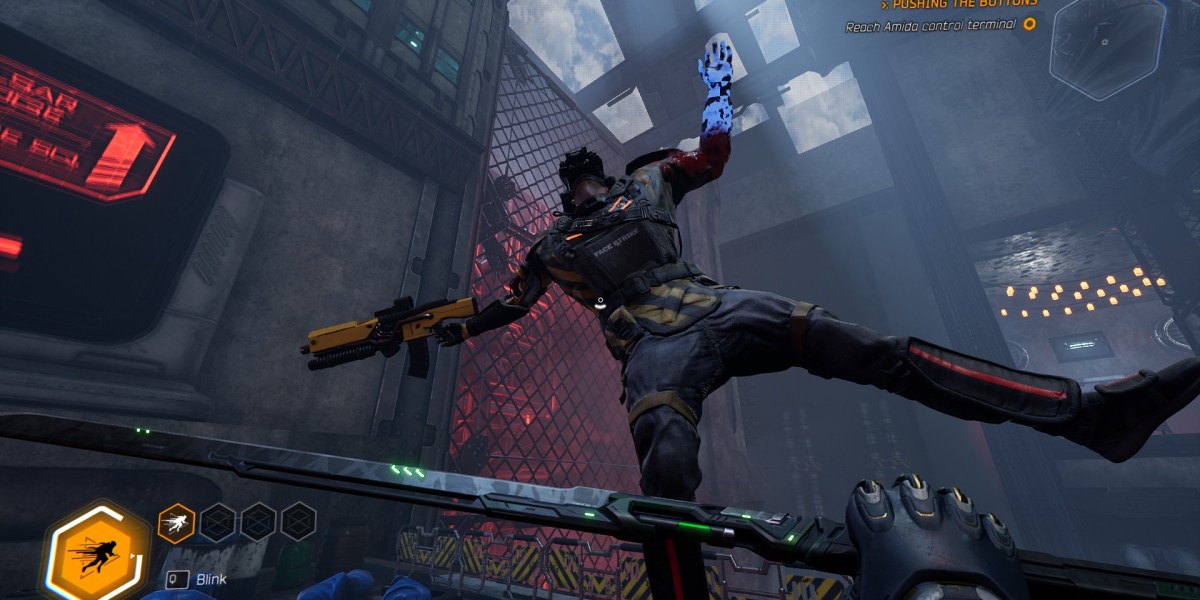 Everybody likes the first Hotline Miami. The gratification of waltzing into an area and taking out a bunch of foes that are just as strong as you cannot be overstated. But that game was top-down, so you could see all around. When you attempt this type of game from the first-person, problems can start to emerge. Ghostrunner has very strong visuals, some excellent mechanics, and great controls (when they work as intended.) But it’s also extremely frustrating and I had considerably less fun than I was expecting to. Fans of tough, trial-and-error games will eat up what it’s offering, but others might not think it’s worth the effort.

Ghostrunner stars the 74th member of the titular group of cyberninja androids, designed to fight for the architect of Dharma City. The game opens with an excellent cutscene showing 74 cutting down foes in his path while fighting his way to Mara, who has betrayed the architect and seeks to take control of the city herself. However, she’s too strong, and our hero ends up being discarded over the side of the building, only to lie dormant for decades. Years later, a resistance group repairs him and an AI modeled after the architect’s consciousness comes to 74’s aid. Their goal is to free the city from Mara and restore the architect to power.

The story here is okayish, but mostly forgettable. At no point did I care about what was happening or why. You got hurt by the bad person and now you want revenge, etc., etc. There are really only three characters: 74 AKA Jack, the architect, and a woman named Zoe that talks to them sometimes. It’s kind of unfortunate that 74 shares a name with gaming’s most famous cyberninja, which I’m assuming to be intentional. There’s a fair amount of dialogue in Ghostrunner, but it’s easy to tune out while you run throughout the game’s environments. Ghostrunner is broken up into two types of gameplay: parkour and combat. The parkour is basically a first-person Super Meat Boy, although it works better here than when most similar games attempt to make that work. Controls are responsive and the mechanics are mostly-intuitive, even if the wall-running doesn’t work some of the time. I frequently found myself dying because Jack would hit a wall and just stop, resulting in him plummeting to the abyss below. It does work more often than not though, and can be exhilarating. Leaping from surface to surface, sliding down slopes, and swinging from grappling points feels great, as does slowing down time and shifting to the side in mid-air.

The combat is, of course, like Hotline Miami. You enter into areas and have to kill everything before you can move on. You can only take a single hit, but that goes the same for all of your foes. Once you learn how the enemies work, dealing with most of them is honestly pretty easy one-on-one. When first meeting them, however, figuring them out can prove more tricky. For instance, there’s a leaping enemy that pounces at you from far away. Individually, all you need to do is dash to the side right after they leap and then hit them once they’ve landed. Ghostrunner doesn’t particularly care if you know that or not though. When you first meet them, you’ll usually just be killed without being sure as to why. You enter the area, they pounce on you, and then you’re forced to try again until you figure it out.

Then there’s the fact that multiple types of enemies are grouped together. You’ll have to simultaneously dodge bullets, keep tabs on where the enemies outside of your field of view are, and try to hit everything in a certain order without stopping, as moving is the best way to stay alive. These sections devolve into tedious trial-and-error, where you memorize the layout of the area, the enemy placements, and craft a plan of attack to take them all down. A good number of them felt unfair to me, even when I went to replay them after beating the game the first time. Depending on where the enemies are standing and what they’re capable of, you can end up in a very bad position, such as if there’s a machine gun enemy below you that you can’t get a look at without risking immediate death. Ghostrunner can be a very cheap game. 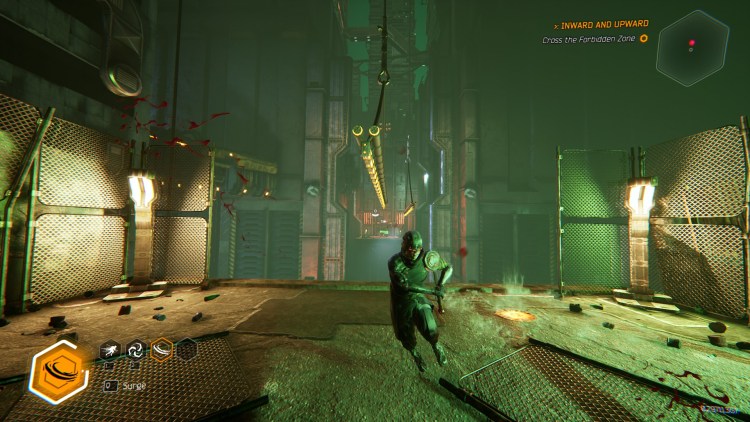 Ghostrunner has 17 levels. Most of these are of the standard variety and three are boss battles.  They’re far from equal in both length and difficulty. Many are fifteen minutes long, but some can take as long as an hour when memorization and trial-and-error are included. It’s not abnormal to die over 100 times in a longer level. As for a difficulty curve, I feel that the game has a pretty poor one. The first third of the game felt a lot harder to me, as I don’t think it does a particularly good job of building you up alongside the mechanics it introduces. You just have to learn the hard way and take the beatings. Once you finally get everything beaten into you, the game gets much easier. I died over 300 times in the first boss battle because I didn’t see that there were grappling hooks at the top of a section and because I simply never used a skill that was absolutely necessary to master to pass the second part, as the game never gave me a good reason to use it.

I was astounded when later levels ended up being cakewalks. Sometimes you’ll get a level that’s really easy and then the next one will be aggravatingly difficult. The sections in one might mostly be fair, only for you to find a more poorly-designed section later on. The second and third boss fights, in particular, are shockingly easy. Ghostrunner spends its entire narrative hyping up the last boss, only for her to be a simple, checkpointed fight with extremely telegraphed attacks and an underwhelming formula. There’s one last level after the final fight, though, and it’s one of the most tedious, obnoxious ones in the game. It has wall-running sections that go on way, way too long and there are absolutely no enemies or puzzles to break them up. Some levels have unique puzzles in them, especially early on, that are kind of interesting, but they never pop up again and are a bit of a missed opportunity. Similarly, I feel like some of the enemy types are conspicuously underutilized, where you’ll meet them and then hardly ever see them again. 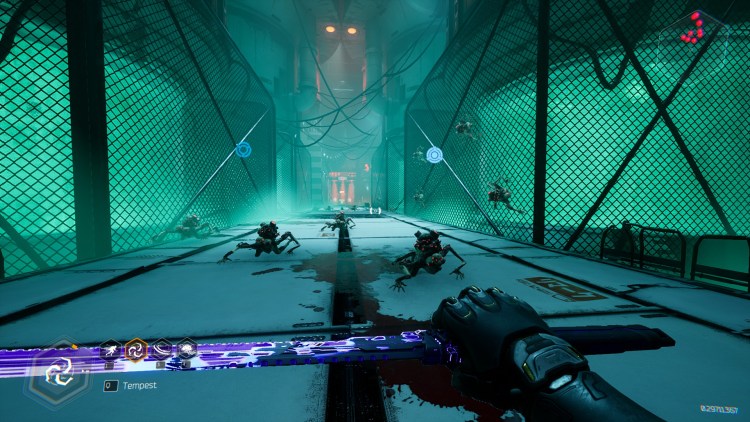 Ghostrunner‘s visuals are lovely though, even if most of the levels take place in generic cyber-industrial areas. The textures are excellent, and the game has a great aesthetic. The movement and action are also extremely smooth and unique. However, the game has an uneven difficulty curve, some underwhelming boss battles, and is very frustrating much of the time. The game was obviously much easier on a second playthrough, but I still found many sections to be tedious and wanted to get them over with. Once you’re done with the campaign, your options are to play it again or nothing. There’s just nothing else to do if you’re not into speedrunning. The game took me about 10 hours, although more skilled players than myself will be able to complete it in less, plus there are plenty of collectibles to find if you’re so inclined. To be sure, this is a good game, but I expected it to be more balanced and fun than it ended up being. The “git gud” crowd will probably have a field day bragging about how easy it is on message boards, though.

Ghostrunner is a very well-made game with excellent graphics and tight controls, but it's often frustrating, with a very uneven difficulty curve and some horribly tedious sections. Plus, once you're done with the campaign, all that's left is to do it again.