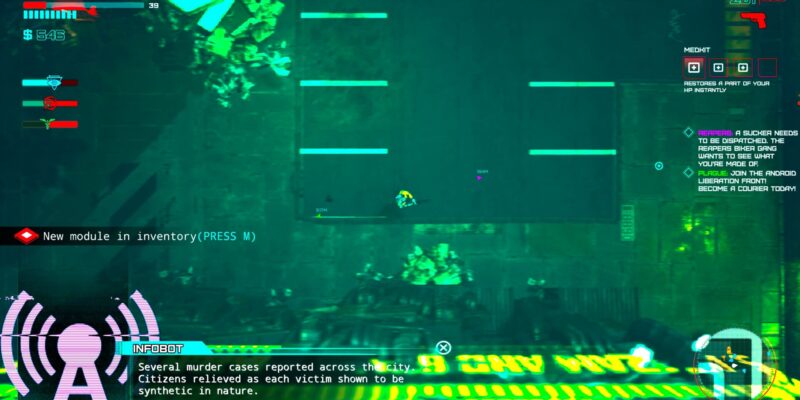 Does anybody else remember way back in the day, when the Grand Theft Auto franchise lacked that ever-critical third dimension? There was an intrinsic glee when looking down from above upon unbridled mayhem, featuring what appeared to be ants, armed with pea-shooters. Things have come a long way since then, but the recently launched Early Access title Glitchpunk is made in a way to relive that retro glory, with equal parts of cyberpunk vibes mixed in for good measure. With a recipe like that, how could such a game go wrong?

I’m sure it’s going to come as a shock, but in this futuristic game, you play the part of an android. This humanoid is tasked with the general housekeeping for the crime syndicates across New Baltia. Early missions include a steady diet of hitman jobs and general thievery. Texas, as you’re named by your handler, has his/her work cut out for them. With all of that in mind, it was prime time to start climbing the ladder of organized crime, one bullet at a time.

Talk about starting on the wrong foot. Glitchpunk lives up to its name in the most literal sense. I know this is an Early Access release, but I encountered a wide variety of issues throughout my time with Glitchpunk. The first roadblock was encountered mere seconds after leaving the start menu. My rig, which has managed to run Cyberpunk 2077 at relatively decent quality levels, was reduced to slag by this unassuming powerhouse. 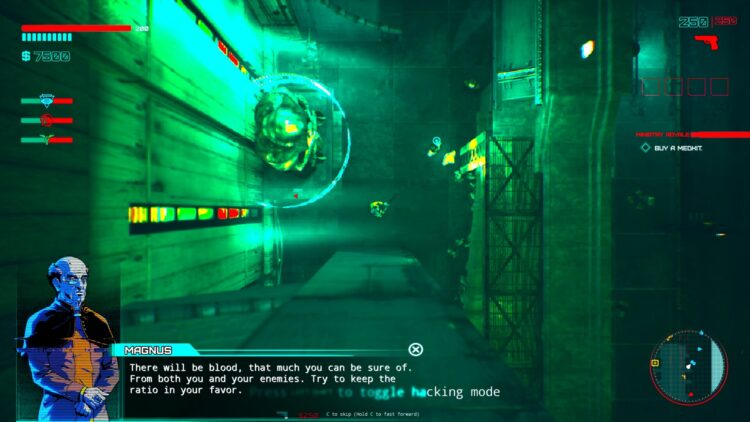 Call me crazy, but it doesn’t make sense that my admittedly dated GTX 1080 is taxed so heavily from a game so tame, visually speaking. My machine is capable of running Cyberpunk 2077, but not Glitchpunk? The framerate, which fluttered between 10-15 frames per second, sure seemed to indicate that, loud and clear. Even after lowering my resolution drastically, these same performance issues persisted. Only after tinkering with settings, did I determine that “Resolution Scaling” was the culprit of my woes. Turning it all the way down to the standard x1.0 ratio restored my ability to play. In fact, once I made the tweak, it was smooth sailing from there.

Just kidding! You thought I’d let it off that easily? Think again. Next up in the cavalcade of troubles was the intro tutorial, which can give you fits if you don’t follow the directions exactly. For one, you can spend all of your money right out of the gate, despite it being critical to have cash on hand for the later stages of the walkthrough. I went and blew all my dough on weapons and ammo, accidentally burning through the scratch necessary to proceed. This meant that I needed to restart my whole damn playthrough from the top to further progress the storyline. 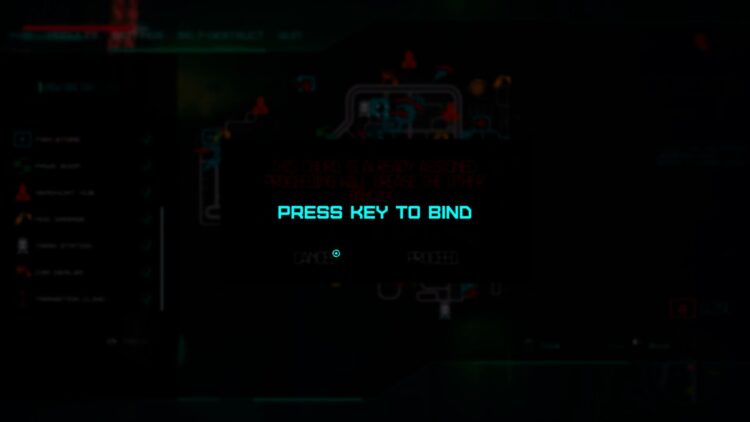 Another key frustration was that all waypoints show up as active on the HUD, even if there are no missions available at that location. There’s nothing like traversing the majority of the map in Glitchpunk only to learn that you’ve already taken the objective from that location. You can only imagine my further annoyance when I paused the game and clicked on the map, only to be greeted by an infinite loop of “Press Key to Bind” modal pop-up windows. I had to once again hard restart the entire game to address the issue. Oh, and don’t even get me started on the seemingly half-implemented controller support. Seriously. This game is a mess.

Once I got past all of the technical hurdles, I was finally able to settle into the gameplay, which is genuinely entertaining. Exploring the bustling map made me excited to see what else was in store. The crisp, almost cutting dialog, pinpoint gunplay, and addictive gameplay loop pulled me in far deeper than it had any right to, especially after all of the issues it showed initially. This truly is GTA for the Cyberpunk audience, and I was all in for it. 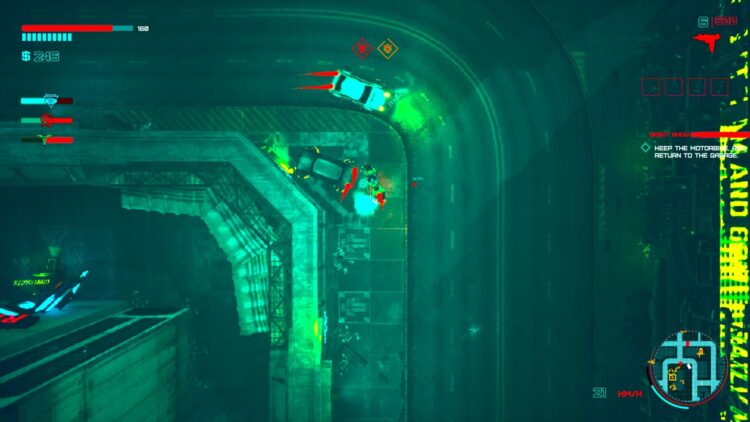 And then it happened, again. Glitchpunk remembered that it was supposed to be broken as shit and put me in another impassible scenario. Whenever you’re busted by cops, you’re stripped of a portion of on-hand cash and all boomsticks. The problem with this, is that I spent the last of my futuristic greenbacks to reload my weapons before promptly getting busted. This meant that I respawned with literally no money and no weapons. Even the usual “Press R to Restart” prompt wasn’t an option, because I was between missions when pinched by the fuzz.

Normally I wouldn’t think of that incident as a big issue. Unfortunately, Glitchpunk’s only remaining mission was to pay someone a thousand bucks. So how did I manage to round up that kind of scratch without weapons or any other objectives to milk, you ask? Spoiler alert: I turned the game off and haven’t been back since. 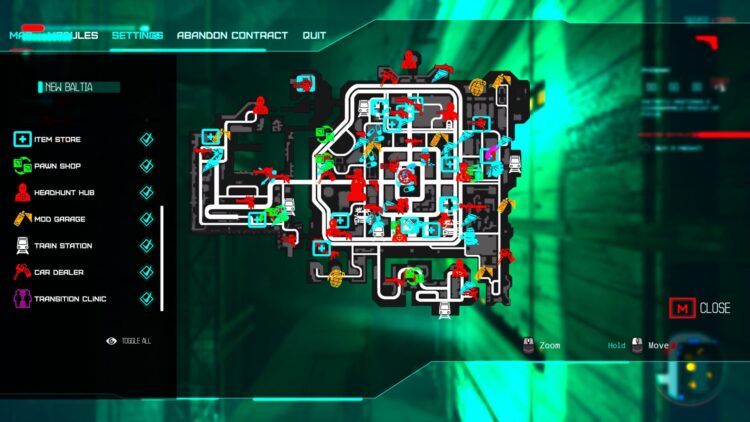 Simple, stupid, and completely preventable issues could easily be put aside in rare instances. However, when you compound all of the problems over a very short period, it tends to taint your overall impression. To put it bluntly, I wasn’t impressed on a technical level, . Yet on the other side of the coin, I legitimately did enjoy what I was able to play between hard restarts of the program.

I genuinely wanted to love Glitchpunk. From the outside looking in, things appear great. However, eventually, you press “Enter” and the game has to start. That’s where the wheels begin to fall off the wagon. Feel free to roll the dice if you like what you see, because it is legitimately a blast to play. Just know that Glitchpunk as a product needs quite a bit of work before it’s ready to leave Early Access and enter prime time.