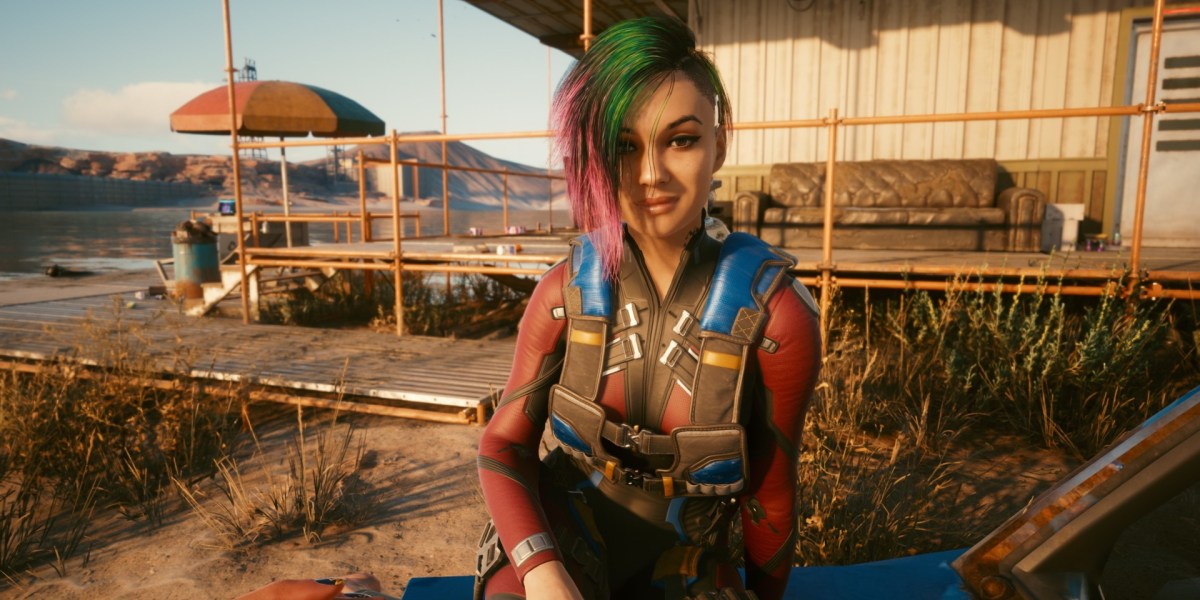 It’s now been over seven months since Cyberpunk 2077 launched, and it’s finally back on the PlayStation Store today. With such a turn of events, many skeptical PC gamers are likely wondering if the developers have actually fixed Cyberpunk 2077 as promised. Seeing as there’s plenty of confusion about the state of the game, we figured it was prime time to do a technical review follow-up of sorts.

Cyberpunk 2077‘s infamy stems from the treasure trove of glitches that came with the launch version of the game. We say treasure trove, because there were a ton of them. Some were also quite damn funny. What’s not funny, however, are glitches that halt progression, cause freezes and performance dips, or, worse, corrupt save files. All of these issues and more were present at launch, but I spent a good 30 hours recently pouring over the game to see how it fares today. So is Cyberpunk 2077 fixed? That depends on where you set the bar.

My take on the game’s performance focuses on the recent builds, but you can see our original technical review for a point of reference. I tested Cyberpunk 2077 on two systems with vastly different performance capabilities. Here’s a brief rundown of each. The first system consists of a GTX 1080 GPU paired with a four-core 7700K CPU and 16 GB of 2400 RAM on a PCIe 3.0 SSD. The second boasts a RTX 3070 paired with an eight-core 11700K and 16 GB of 3200 RAM on a SATA SSD. 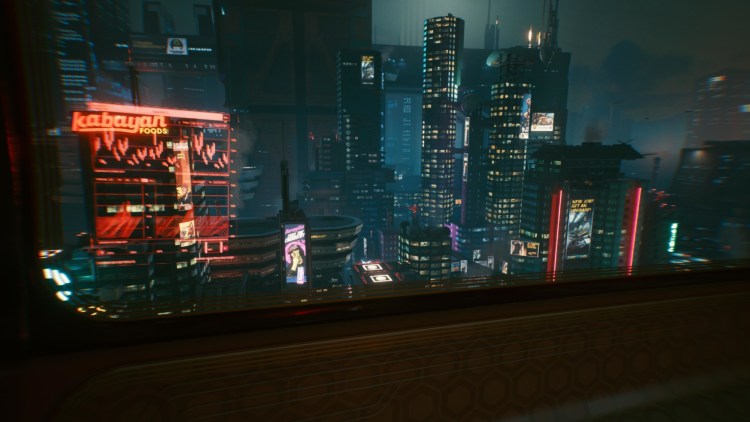 Yes, it’s a whole city your PC has to render. And it’s packed with stuff.

It’s not easy to run Crys– er, Cyberpunk 2077. This game on its highest settings will continue to punish future generations of gaming hardware. Fortunately, you don’t need to crank those settings up much at all for the game to look good. Most of the settings I used were either on low or turned off entirely. This is because the game doesn’t offer options for anti-aliasing or textures (in my experience), which tend to be the most noticeable settings.

Most of what you can change has to do with lighting, shadows, reflections, and effects. At a minimum, you can make a decent improvement to the visual aesthetic by setting anisotropic filtering to four and ambient occlusion to low. You can of course turn up more options, but you might not have the performance headroom depending on your resolution and framerate targets. Speaking of which, you can use Nvidia’s DLSS or AMD’s FidelityFX CAS to help achieve those goals via resolution upscaling and dynamic resolution, respectively.

If your system is a few years old…

My performance summary for the system with the GTX 1080 is pretty short and unsweet. I barely managed to run the game at 60 fps in 1080p with the aforementioned settings in effect. The game also exhibited constant micro-stutters that were just noticeable enough to be irritating, but not entirely disruptive. I was never able to pin down the cause of this issue. A four-core eight-thread CPU is not ideal for this game, but I’m certain the GPU was the main limiting factor. Conditions like rainstorms created more rendered reflections that consequently tanked the framerate. Other open-world areas of the game were simply too graphically intensive and caused temporary dips until I left the area. 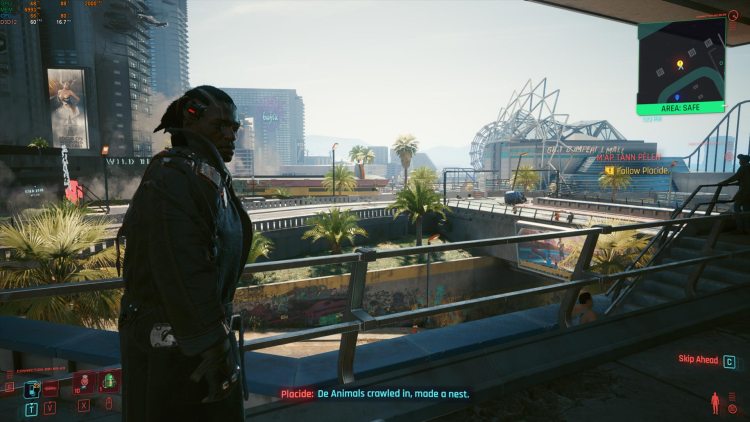 The one redeeming factor on this system was the storage device. I didn’t notice any loading issues as I traversed Night City, and loading game saves or fast traveling only took 17 seconds on average.

Despite the dips, my average experience was 60 fps, and I felt the game was entirely playable on the system. However, as someone that’s used to playing in near-4K resolutions, this was not how I wanted or expected to experience the game.

I used the same settings for the system with the RTX 3070, but with DLSS set to Quality. As one might expect, this system absolutely killed it. As in, I had a smooth 60 fps experience in 4K everywhere I went. I also played with 1440p and 1080p resolutions in the Japanese district for your amusement. I should point out that I imposed a 60 fps limit on my monitor for the 4K, but uncapped the framerate for lower resolutions. Cyberpunk 2077 is a very inconsistent game in terms of framerates, so you might consider imposing a custom framerate cap based upon what your system can handle and what you’re happy with.

When uncapped at 1440p, I recorded an overall fps range of 69-112. As mentioned, the framerates are very inconsistent and don’t plot well for the sake of averages. If I had to give an fps average, the number is technically 89 fps. At 1080p, performance wasn’t much better. Notably, this has less to do with the game and more to do with Nvidia’s hardware. The overall fps range at 1080p was 72-133, but the average performance was even more inconsistent at this resolution. Instead, you should consider the average fps range, which was 85-115. 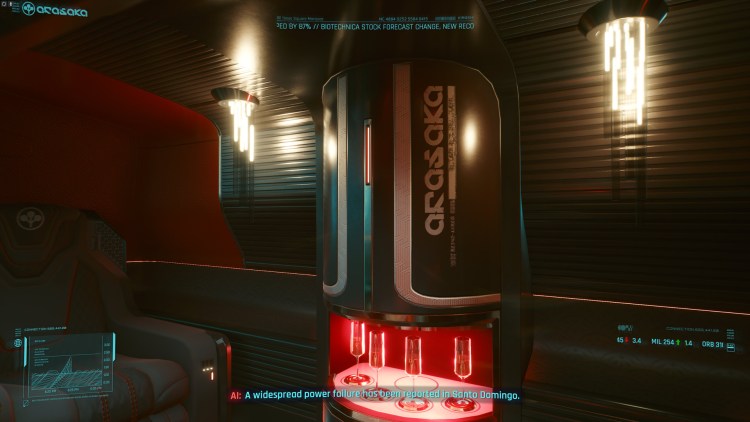 Tweaking the settings can be a champagne in the ass, but you need to get it right for decent performance.

In-game performance in Night City was fine using a SATA SSD, but loading game saves took about 35 seconds. DLSS is a must in this game, and nothing has changed since our initial review. We don’t know if AMD’s FidelityFX Super Resolution will be added in a later update to help Radeon owners, but the best way to play this game currently is with a RTX card. As for ray tracing, it was totally unusable at 4K. The 3070 struggled at 1440p as well when everything was turned on. At 1080p, it worked alright. With that said, I don’t think ray tracing is worth the performance hit in this game.

Glitches in the system?

Now that you have a baseline idea of how Cyberpunk 2077 runs, the question shifts to whether or not the game has been fixed. Can you finish it? Yes. Does it crash? Not once that I saw. Are there bugs everywhere? Nope, but you will encounter a number of them along the way. The main things plaguing Cyberpunk 2077 at this point are just nagging glitches that don’t break anything more than your immersion. Truth be told, the game almost got me though.

At a point early on in the game, you’ll meet Jackie at a noodle stand and then jump into a car with him. The problem was that I thought he was going to drive around the same time he went for the passenger door. Well, what happened was that we both called shotgun and I won. In one of the more hilarious moments I’ve had in gaming, I watched V manhandle his best friend and slam him into the pavement. I mean Jackie got laid out. It was so bad that Jackie was wedged inside the ground, and I was stuck twitching mid-animation for a few. 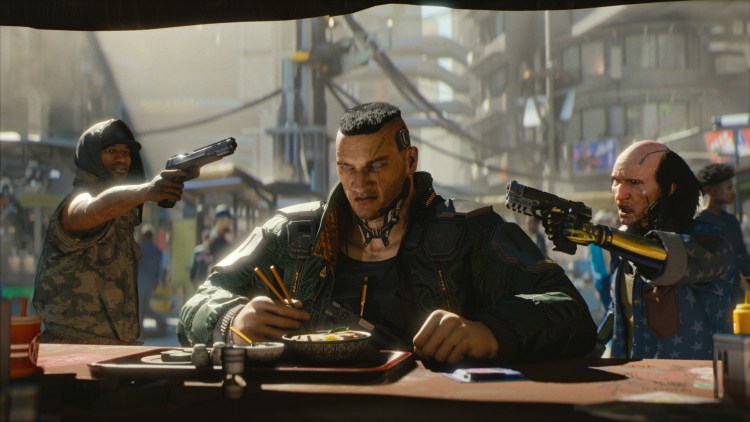 Those thugs with guns were the least of his problems near the noodle stand.

Eventually, I made it into the car and shuffled over to the driver seat. Jackie, on the other hand, went back to the noodle stand like nothing happened. Sometimes you just have to play things cool like that. I was able to repeat the sequence properly without incident.

As I said, a lot of the bugs can be hilarious if you don’t mind them. It’s not acceptable from a technical perspective, but at least we get some free entertainment that’s relatively harmless. An enemy jumped over a barricade to rush me at one point and somehow got sucked into an orbital pattern where I was the sun and he was a planet. We all like when it feels like the world revolves around us, but it gets a bit weird in a literal sense. Another time, an NPC rolled up in a vehicle that lacked a body. It was just him on a set of wheels with a steering wheel attached to it. I also had a chuckle when Jackie walked in during the scene with the ice bath and he held up an invisible gun. Unfortunately, the silliness ends there. The rest of the bugs were irritating. 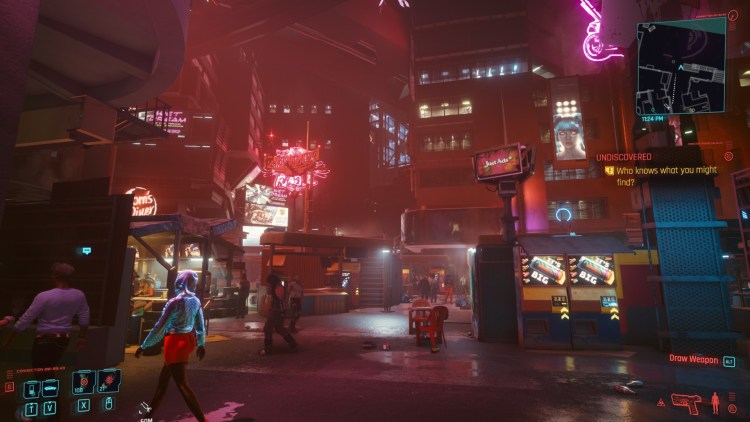 Aside from the occasional bugged animations on random NPCs and animated objects, you’re bound to notice some lighting glitches like flickering effects. These are few and far between, but you’ll likely find something at some point. I can at least throw a bone to ray tracing, because turning it on improves lighting accuracy and kills some of the glitches automatically. But it’s not practical, so let’s move on.

In terms of immersion, the main thing that needs work in Cyberpunk 2077 is rendering on NPCs. The developers tried to conserve system resources by only rendering what’s in the player’s field of view. It’s a smart approach to design, when it works. However, what’s currently going on is that NPCs render in right in front of you if you do something like quickly turn around. There appears to be a render delay. Similar rendering issues occur when drawing weapons, where your hands will phase in on the screen. I’m not sure if this last issue is related to rendering, but certain objects create a visual ghosting effect on the screen when in motion. 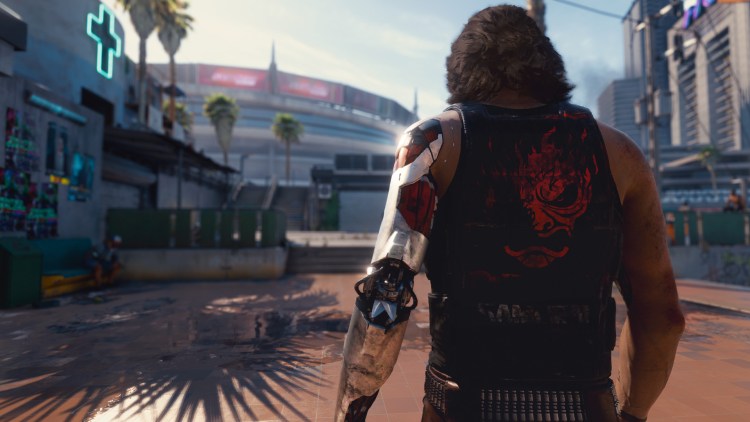 All of the systems like the menus, skill trees, missions, and other things work as expected. I’ve pointed out all the issues I could find. Unfortunately, there’s no definitive answer to whether or not Cyberpunk 2077 is “fixed” at this point in time. I’d say it’s fixed enough to play, while many others will say it’s still in terrible shape. If you’re okay with playing a game that feels like it’s in a latter stage of Early Access, you won’t be disappointed.

Some are still asking when the game will be “fun,” but that appears to be a conflict of expectations in regards to content. Others are also calling for CDPR to pull a “No Man’s Sky” and massively overhaul the game. Cyberpunk 2077 feels whole in comparison to something like the GTA V story mode, but it’s not the ultimate RPG. We can’t speculate what the developer will do next, but the game does feel generally content complete.

It’s probably unrealistic to expect any major performance improvements on PC at this point. You will simply need some good hardware to make this game look like the trailers. If you lack a new GPU, but intend to get one when possible, that may be a reason to hold off. Otherwise, I can recommend jumping into the game now to see for yourself what it’s like. You can find the game on pretty much any platform. If you do decide to give it a go, we have plenty of guides to help you make sense of the technology and crazy events in Night City.