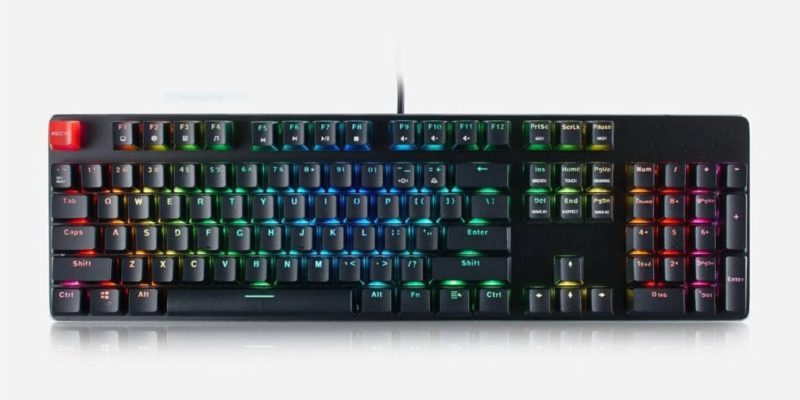 The Glorious GMMK is a dream come true for any mechanical keyboard junkie. With hot swappable switches, per-key RGB lighting, and a sleek metal frame, it’s just about the perfect keyboard. More than that, though, it’s cheap. 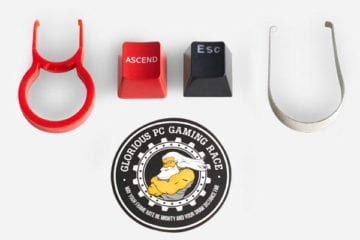 The Glorious GMMK comes in unassuming packaging but, as with other Glorious products, there are a lot of goodies in the box. In addition to the user guide and a sticker, Glorious also includes a few extra keycaps. The red “ascend” capkey for the escape key is installed by default, which you can replace with a standard black escape key if you want.

There’s also an extra function key with the Glorious mascot. Otherwise, the keyboard is fairly standard in terms of looks. The non-detachable braided USB cable has some routing paths on the bottom of the keyboard, which sit alongside a compartment for the included keycap puller. 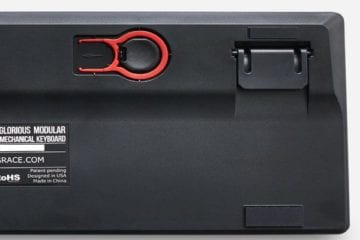 My only gripe with the overall build is the braided cable. It’s chunky, much unlike the ascend cable seen on the Glorious Model O mouse. Like nearly all keyboards with multiple routing paths, there’s a lot of cable training involved. Trying to force the cable to run to the right side of my monitor resulted in it constantly popping out of the groove.

Thankfully, it’s easy to overlook such a small issue in the grand scheme of things. The body of the GMMK is a hefty piece of metal, painted black with a gorgeous silver accent around the edges. The keyboard looks and feels amazing when it comes to build quality.

As for feel, that’s going to depend on the switches you use. As a Cherry MX Blue user, the Gateron Browns that came with my GMMK test unit were serviceable, though I missed the ever-annoying click. Even so, with the GMMK’s modular design, it’s easy to use the switches you want.

To prebuilt or not to prebuilt

The GMMK looks basic, appearing in product photos as just another mechanical keyboard around $100. It’s much more than that, though. It has all of the tenets of a $100 or so mechanical keyboard, with a full aluminum body, double-shot keycaps and transparent switches. However, it’s also fully modular. 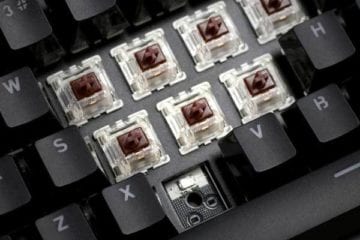 Changing switches takes no more than a few seconds

You can switch, well, switches in a matter of seconds, using a similar tool to pulling keycaps. The switches are hot swappable, meaning there’s no soldering required. Any three-pin switch will work, including the available Gateron and Kailh switches, as well as Cherry switches.

For the price, the ability to hot swap switches is insane. More than that, though, is that the price is cheaper if you don’t purchase switches. The base keyboard is $60, no matter if you purchase full-size, compact, or tenkeyless. You can then build on that with your choice of switches, keycaps, and, if you want, o-rings.

If you skip past o-rings, you’ll spend about $120 customizing your own board, which is still a great deal. However, Glorious also sells a pre-built GMMK model with Gateron brown switches and black keycaps, which is what I used for this review.

As I saw with the Model O mouse, Glorious is a brand focused on options, and that’s no more clearly exemplified than it is with the GMMK, which is especially impressive at the asking price. Similar keyboards, such as the Drop CTRL, cost twice the price with negligible feature improvements. The GMMK is missing a few things, namely a detachable cable, but with how inexpensive it is, that hardly matters.

Keycaps and switches and o-rings, oh my!

If you choose not to go prebuilt, you can customize your keyboard, either by choosing options on the Glorious website or by ordering the barebones unit and customizing it yourself. Although Glorious has a lot of options for building your keyboard, you may want to hold off and just order the base model. 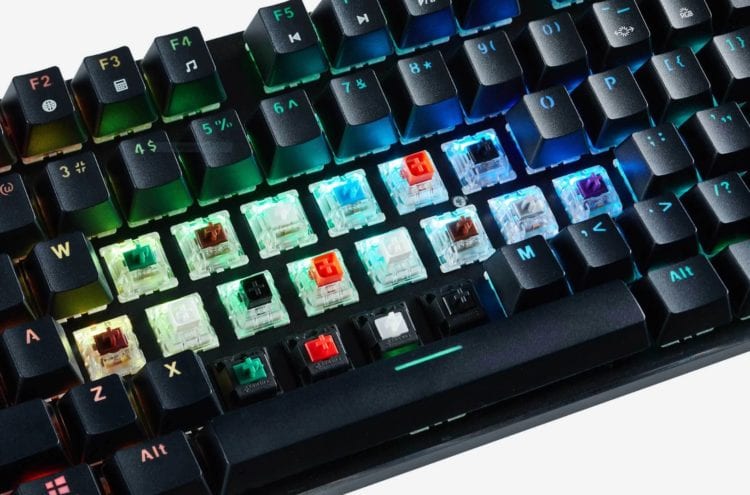 For keycaps, there are three English options, as well as a slew of sets for other languages. Black and white are the only options at the time of writing, but Glorious usually sells its Aura keycaps, too. They feature a black top with frosted white sides, allowing the RGB lighting to shine through.

There are plenty of o-ring options, too, each of which are compatible with the RGB LEDs (they aren’t opaque). I like the options, overall, but as a battle hardened Cherry user for many years, the fact that they aren’t available is a bummer. That said, Cherry switches are readily available, and with the GMMK’s modular design, that’s just fine.

It’s not difficult finding the GMMK software on the Glorious website. However, there are multiple versions of the software based on the serial number your keyboard has. In my case, my serial number started in “2019,” presumably the production year, which there wasn’t an installer for. I was able to get the software working with the latest installer, but some clarification here would go a long way. 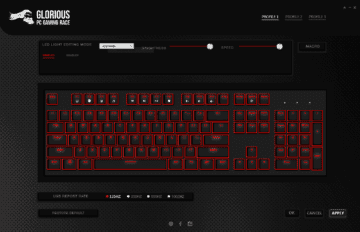 The GMMK software allows you to change lighting, set macros, and more

Opening the software, things are much better. By default, the LED editing mode is turned off, which means the GMMK will display a static rainbow pattern. Turning it on, I was able to initiate a handful of lighting effects, including rippling of keystrokes, a Matrix-esque effect, and a ping-pong effect.

These effects look nice, but they’re not really practical. When trying to set up the keyboard, it was hard to find a simple static setting among the list of flashy effects. The software works well for what it is, but it doesn’t feel as user-friendly or robust as similar applications from Corsair and Cooler Master.

All of the lighting effects and keybindings are stored in one of three profiles, which you can recall in the software. Unfortunately, you can’t change between profiles on the actual keyboard, which is a shame. The GMMK has a ton of hotkeys pre-programmed, allowing you to customize the LEDs, launch certain applications, and change the keyboard mode. However, there are no hotkeys for changing your profiles.

The GMMK hits all of the right areas at a reasonable price. Overall, the ability to hotswap switches is what stands out most, in addition to the build quality. However, there are a handful of design oversights, particularly in the software, that makes the overall package feel less refined than some more expensive counterparts. Still, at the price, it’s hard to complain.

Gamedec, a new cyberpunk RPG, is coming in 2020