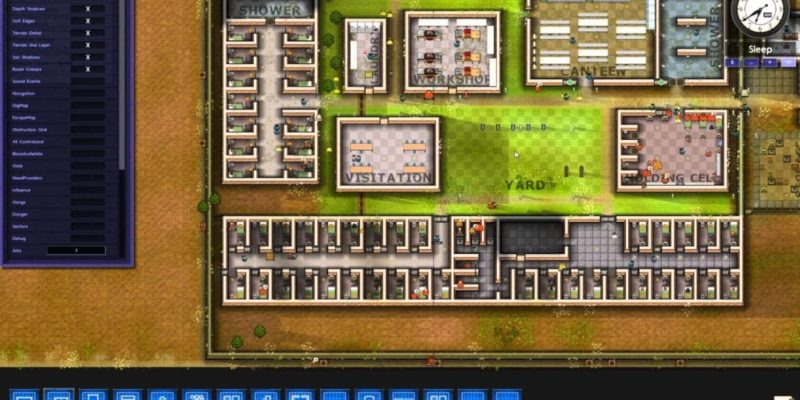 The latest Prison Architect alpha has just been released from development prison into the arms of the public, and this one’s all about escaping.

Alpha 13’s escape features – and the methods of dealing with them – are, according to the developers, genuinely game-changing, both in terms of how you design your prison and how you deal with problems. Have you been building prisons with maximum security cells near the walls? Hahaha. Then you’re going to have lots of prisoners digging two squares to get free. Have you been plonking giant water pipes alongside the cell walls? Well, those are much easier to dig through than most other things, so you’ve just given your inmates a path to freedom. In short: you now actually have to design your prison with serious security in mind.

Alongside this is a new prison policy feature, letting you select the punishments for different infractions. Perhaps you want there to be no real punishment for finding prisoners with drugs, but anyone who complains must be locked in solitary for 12 hours? Welp, you can do that. You can make your prison a holiday camp or a nightmarish hellhole; you can keep your prisoners happy, or you can slap down any resistance the instant it begins to stop it from going any further.

This alpha also expands on features introduced in alpha 12, insofar as contraband (in the form of stolen tools) can be used by prisoners to dig their way to freedom, and searching cells is currently about the only way to detect escape tunnels. As such, you might want to set your policies so that if you find a prisoner smuggling tools, your guards will automatically toss his cell in search of an escape tunnel. Alpha 14 promises dogs, which will help with both detecting contraband and finding tunnels, but they’re not in yet. This is an alpha, after all.

I’ve been meaning to write something about Prison Architect for awhile and this might be a good chance for me to do so, so keep your eyes peeled for a bit of text about this in the coming weeks. (That is not a promise.)

You can check out a genuinely entertaining devblog video, showing off all of these features, below.

By A.K Rahming2 mins ago
News