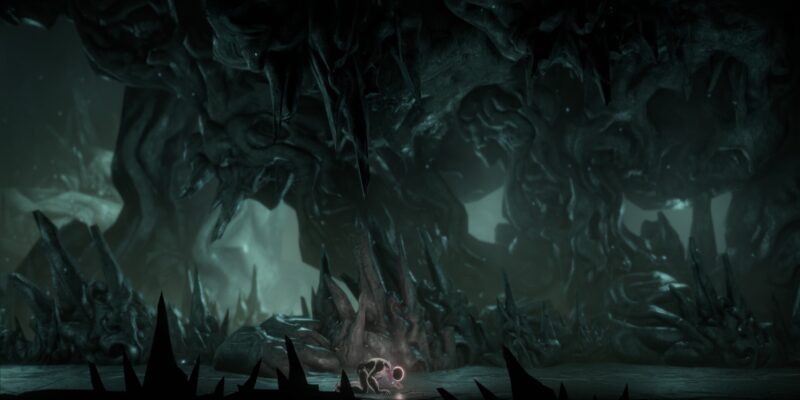 The world of Grime is gritty, depressing, and downright brutal. Its zones are littered with bloodthirsty enemies and deadly traps. You’re bound to have a few deaths. Oh, and you might feel lost along the way too. Here’s our Grime beginner’s guide to help you with tips regarding combat, leveling, and exploration.

Note: For more information, you can check out our Grime guides and features hub.

Grime is a Souls-like Metroidvania. There’s an emphasis not only on platforming and backtracking to previously visited areas, but also skill-based combat. This means being able to block an attack just at the right moment. The only exceptions are attacks with a red outline or “tell” as these can’t be countered.

If you time your button-press correctly, there are three possible outcomes: 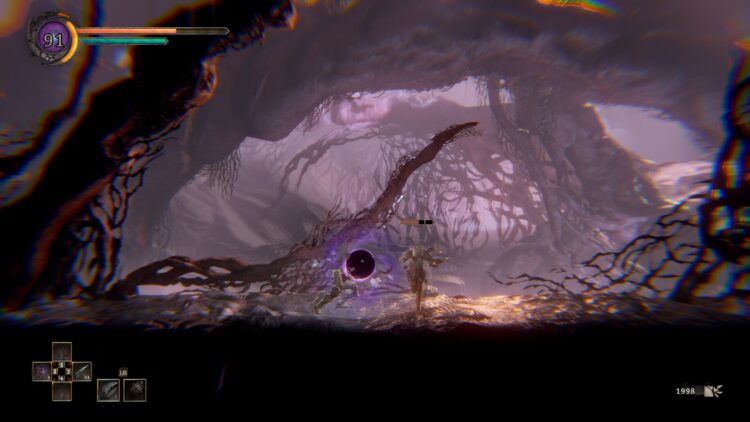 Your character in Grime has a black hole for a head. Basically, you’ll use your head to parry/absorb the aforementioned attacks. If an absorb is triggered, it’ll deal tremendous damage. In some cases, it’ll kill an enemy outright or deplete the red segment of its health bar.

If the target’s death coincides with an absorption, you’ll also increase your tally for that monster. Once the tally is completed, you’ll unlock a trait or skill. In turn, you’ll use Hunt Points (found by defeating specific/elite monsters) to activate those perks.

Note: You can learn more in our Grime absorbable enemy skills/traits guide. 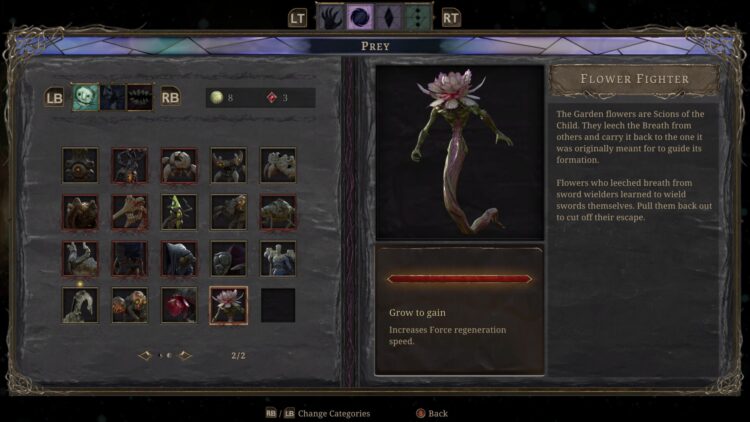 Killing enemies grants you mass (i.e., gold/souls/EXP). Mass is used to purchase items or weapons from vendors, as well as leveling up your stats (which you can do whenever you interact with a save point/Surrogate). You’ll be able to allocate mass into health, force (i.e., stamina), and the three weapon-centric stats: strength, dexterity, and resonance (i.e., intelligence).

At the start, you’ll probably want to level up your health and force a bit. Then, later, you’ll want to focus on strength, dexterity, or resonance depending on the weapons you want to use. Most weapons in Grime have a stat requirement before they can be equipped (kind of like Dark Souls). There’s also a letter that denotes how well a weapon scales based on a particular stat.

Note 1: To clarify, it’s possible to respec your skills/traits if you find items called Motley Pearls. However, you won’t be able to respec your stats at all. They’re locked for good, so make sure you’re investing in the right stat for a certain weapon that you might want to use later on. You can learn more about gear pieces in our Grime weapon locations guide.

Note 2: Oh, and to avoid confusion, the armor pieces that you obtain in Grime don’t give stats. They’re just for cosmetic design. 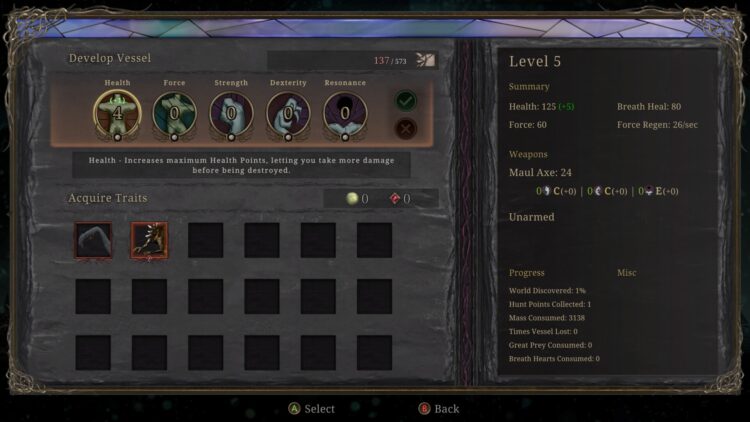 Compared to other Metroidvanias, Grime‘s map doesn’t get auto-filled whenever you explore new rooms. Instead, the map for each zone is completely darkened. The only way to see what it looks like is by finding the beacon in that zone. Unfortunately, there are moments when you’d stumble upon items/secrets (or gaps and ledges that you couldn’t reach at the time). If you haven’t found the beacon yet, then your only recourse is to  leave a pin on the map panel. Good luck trying to remember what’s in that location.

The map system isn’t the only one that’s restrictive. Grime‘s fast travel system can be downright frustrating too. There are a few methods, but these are fairly limited and you’d realize that you’re wasting a lot of time going back and forth areas. There’s an actual fast travel skill, but it comes far too little too late.

Note: You can learn more in our Grime fast travel/Nervepass guide. 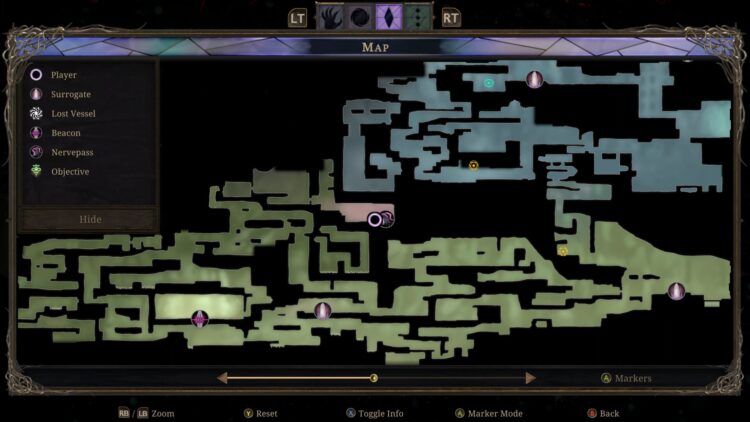 Ardor and the combo counter

Ardor is another unique mechanic in Grime, and you’ll unlock it after beating the first boss, Amalgam. Think of it as a combo counter:

It’s very easy to rack up points since enemies with red HP can be absorbed and killed at the same time. Moreover, if certain foes have multiple HP bar segments, then additional absorbs will earn more points. Anyway, the higher your Ardor’s value, the higher the mass you’ll receive when you kill regular mobs. It’s a great way to farm for EXP/gold. 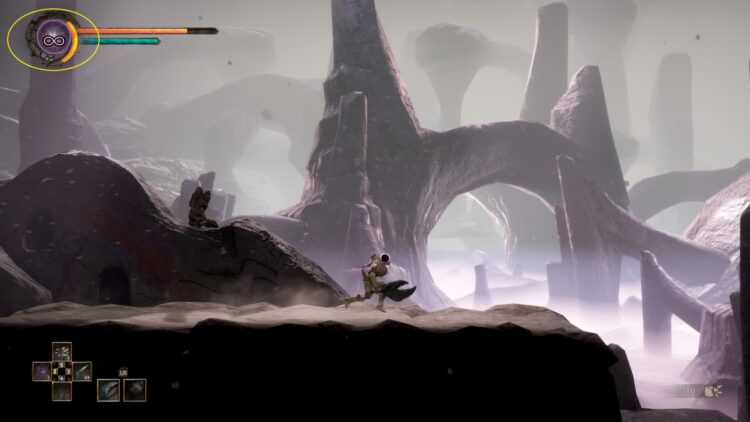 Yes, you will die in Grime. Whether it’s due to enemy mobs, bosses, fiendish traps, or just plain carelessness, your character is bound to meet its demise. Thankfully, deaths are somewhat forgiving in this game. You’ll respawn in the last save point that you interacted with, and you’ll retain all the mass you had beforehand. However, you’ll lose all the Ardor/combo points you’ve acquired. If you go back to the location where you died, you can break a statue of your character (i.e., Lost Vessel) to retain 50% of your previous Ardor.

As for healing, the key mechanic here is called “Breath.” It’s a yellow gauge found to the left of your HP/Force/Ardor meters. Simply pressing the corresponding button allows you to heal a base value. Breaths are also replenished whenever you kill/absorb enemies, when you interact with a save point, or through certain skills/traits. 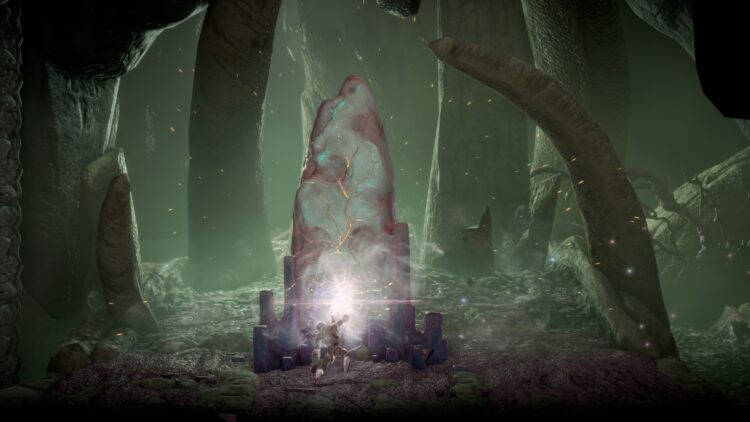 Note: Grime is available via Steam. For more information, check out our guides and features hub.