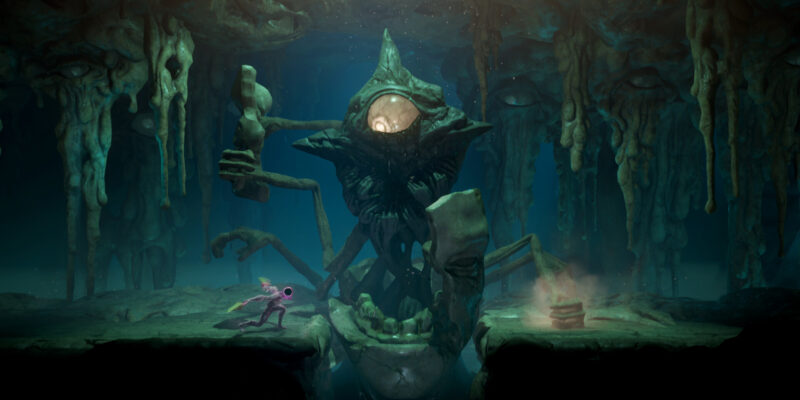 Although neither the Metroid series nor the exploratory Castlevania games sold amazingly well overall, they have left an enormous impact on today’s gaming landscape. These franchises led to the birth of the Metroidvania, a type of exploration-based action game that incorporates elements from one or both series. Metroidvanias have thrived in the indie scene over the last several years, and many of the most popular indie games out there come from this subgenre. One such game, Hollow Knight, influenced the creation of Grime, a new indie Metroidvania that just came out on PC.

A new launch trailer accompanied the release of Grime, and it leaves a solid initial impression. The trailer prominently shows off the game’s wonderfully detailed and macabre environments as well as its creative and bizarre character and enemy designs. An early clip in the trailer depicts one of the game’s central mechanics, which involves absorbing enemies to gain new abilities and weapons.

Making use of ‘living weapons’

According to a press release, Grime sees players fighting their way “through a legion of rock-formed enemies with aberrant ‘living weapons’ and [absorbing] their life essence with [the protagonist’s] head – an infinite black hole.” Combat encourages players to “punish enemies by parrying their attacks, smash them from the ground or even airborne, and absorb them to grow [in] strength.” Players can switch between weapons obtained from absorbed enemies, and even bosses can be absorbed “to gain game-changing abilities that affect both combat and traversal.”

These gameplay elements make Grime seem like an engaging Metroidvania to partake in, and many fans of the subgenre will likely find at least something about this new game that appeals to them. Since players can already purchase the game on PC, it won’t take long for them to find out whether or not Grime will become one of their new favorites.