We all miss Left 4 Dead. There haven’t been many games since its last iteration that have attempted co-operative zombie killing. And that’s a damn shame. GTFO is attempting to revive that genre in a new and refreshing way.

Founded by some of the developers behind Payday 2 and Ghost Recon Advanced Warfighter 2, 10 Chambers Collective recently brought a demo of their game to Gamecom. GTFO is a team-based horde shooter, with added emphasis on the team aspect. You’re thrown in the game as a prisoner and forced to cooperate with three other players. Together, you all head toward the core of the earth for reasons unknown.  In game, you’re allowed to coordinate weapon loadouts as well as equipment. Machine guns and shotguns are present, but so are more unique choices like the glue gun, which can slow enemies or brace a door against a monster swarm. 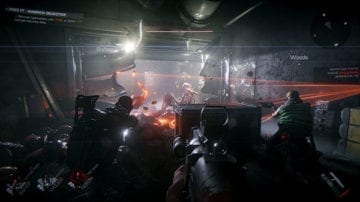 A different breed of monster

You’re going to need every option that’s available as well: these monsters hit hard. GTFO’s aliens are a much more formidable foe than the zombies of old. Aliens detect light and sound but once they get near, players can be downed in two or three hits. There’s an enemy variant known as the “Scout” that players will no doubt come to loathe. Once this enemy sees you, it emits a call for others to zero in on your position.

The horror roots of Left 4 Dead have been cranked up in this title as well. Fog coats the underground passages and there’s very little light to speak of. The game keeps you on your toes by resetting enemy locations after every death. GTFO definitely doesn’t look to be for players weak of heart.

GTFO has no concrete release date but is slated to release exclusively on PC later this year. It won’t be much longer until we can experience this game first-hand. And have the pleasure of being overrun and killed by dozens of frenzied aliens.

The first raid in Destiny 2: Forsaken will go live 10 days after launch… and that’s a good thing

The Last Remnant will get delisted from Steam this September