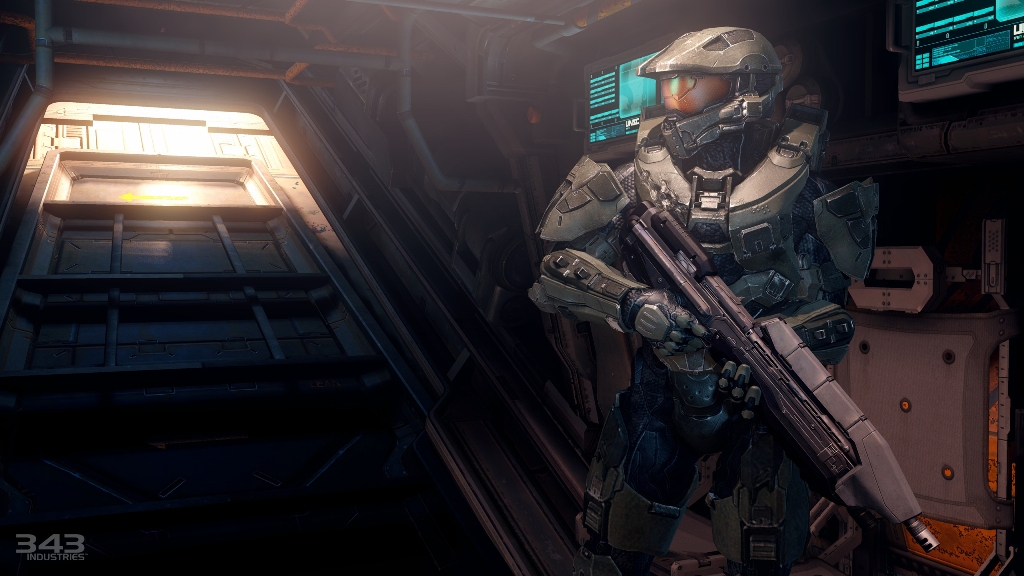 Halo’s new craftsman, 343 Industries, is playing a bit of a no-win game. If Halo 4 crashes and burns (in a similar way to Halo 3’s ending) then all of the blame will be put on them. They’ll have ruined what Bungie created. On the other hand, if Halo 4 is a resounding success with the hungry masses waiting for the next dose of Master Chief, then it’ll be business as normal. They’ll have continued to provide what Bungie created.

No matter what, 343 will be seen as caretakers for Halo. Even if the team goes on to produce five more Halo games, Halo will always be the series Bungie made.

Without changing too much of the formula that has resulted in so much success so far, our three hours of hands-on with Halo 4 has demonstrated a game in which the design team are prepared to make a few additions in a bid to make their mark. Not that you’d know it if you were to only play the opening mission.

The game fades from black some years after the events of Halo 3, with Master Chief in a cryogenic slumber aboard the UNSC Forward Unto Dawn. Our resting hero is rudely awoken by the ship’s emergency sirens alerting him to the fact that everything ‘s going tits up. The Covenant are boarding the ship, AI sex-symbol Cortana seems to be going a little stir crazy and everything in the area is being sucked towards a giant metal planet-kinda-thing dubbed ‘Requiem’.

This opening gambit acts as a tutorial, teaching (or reminding you) how to shoot, move, reload and mash X really fast to open stubborn doors. It’s intense, suitably epic and, quite frankly, really rather good. 343 hasn’t messed with the recognisable weapons such as the Assault Rifle and Battle Rifle, and throwing Chief’s armour clad mass around has the same heavy, satisfying sensation that it always has. Don’t fix what ain’t broken. 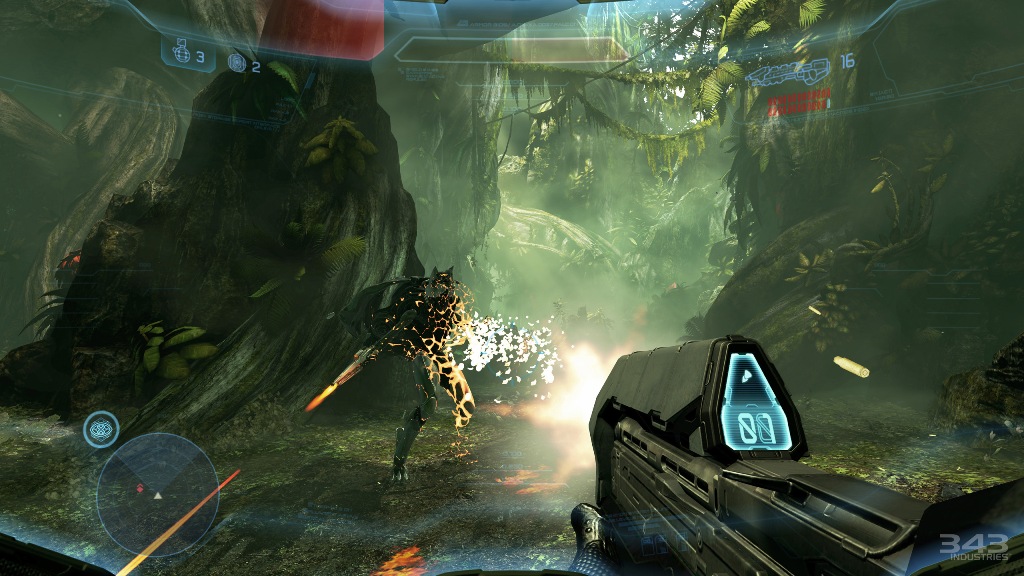 While the old hasn’t changed, new bits and bobs have been brought into play. A second mission we’re let loose on takes place in the world of the Prometheans, a race of high-tech skeletal oddjobs with a taste for flash weaponry. We saw them in three different flavours; a tough, teleporting humanoid known as The Knight, a scuttling dog-like beast and an incredibly irritating flying drone.

As is the case with the more famous Covenant, Prometheans tend to attack in packs made up of different enemy types. The Knight is usually accompanied by four or five dogs and a drone that provides a little extra fire power, but most troublingly, a protective shield. If you can manage it, the best tactic seems to be to take out the drone first to disrupt The Knight’s ability to soak up damage, then knock off the weak-but-quick dogs before tackling the main meal with even odds.

Things are made slightly easier if you can pick up a couple of Promethean weapons. They loosely fall into the same classes as the human weapons – shotgun, sniper rifle, pistol, assault rifle – but come with a few useful trick up their sleeve. For example, bullets from the shotgun bounce off scenery (useful versus the dogs) and the sniper rifle fires three bullets in succession if hip-firing or a single accurate bullet when aiming down the sights.

But who cares about the functionality when the guns look so good? Their sleek white paint job is punctuated by sharp lines of yellow along joints and moving parts, which sets up a stark juxtaposition to the cold, hard matte metal aesthetic of the standard arsenal.

Even better, they look all the more impressive when reloading. Hit X and each section of the gun dismantles and hangs magically in mid air to provide Master Chief access to the ammo slot. Don’t get me wrong, the floaty reload thing is a small ‘feature’, but it does add that extra spice to Promethean weapons that separates them from the usual fodder.   They’re also pretty effective. That helps their charm. 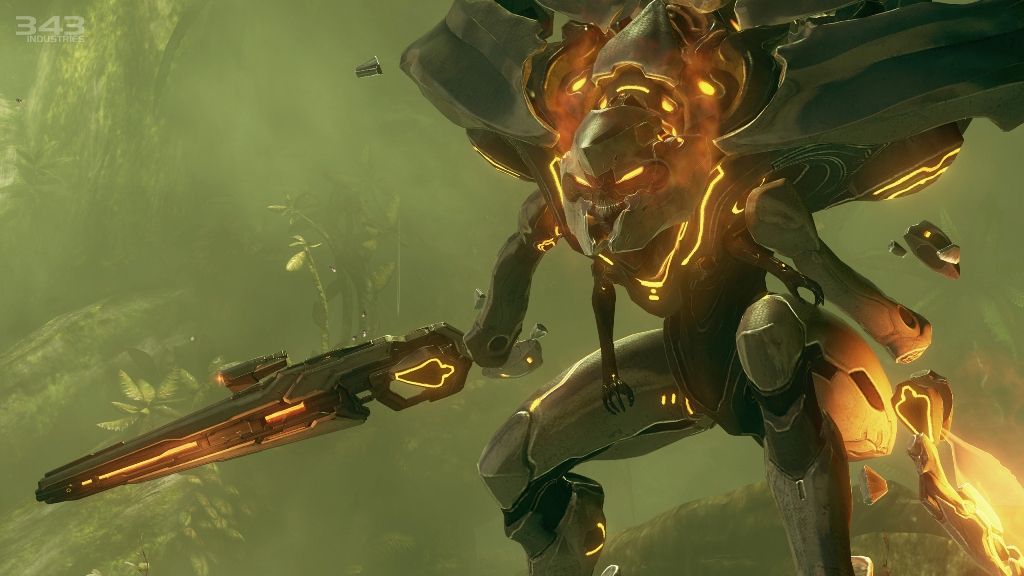 Two campaign missions down, Spartan Ops to go. Given the success of Horde mode rip-off Firefight, all systems are seemingly go on the Halo co-operative front from here on out. Spartan Ops is billed as a new narrative experience, one that will be told in weekly instalments through video and gameplay. 343 and Microsoft held back on showing said videos (annoying), but did let slip a couple of the missions.

Playable with up to four players, both featured the usual objectives of destroy target, destroy enemies and/or both and then evacuate the area. It’s here that Halo’s sandbox potential showed hints of flourishing. Both missions are set in large open environments that allow you to attack the enemy from whichever angle you wish and with a wide range of vehicles and weapons. In today’s age of the-next-game-is-the-best-game, it’ll be interesting to see whether the narrative and missions combine to create something that’s going to keep us coming back for more past the first fortnight, but the idea is nice no matter what the outcome.

Two missions and a taste of Spartan Ops is not enough to develop a full vision of what Halo 4 is going to offer this November, but it is enough to suggest that 343 are not looking to completely reinvent the series. Even the new Prometheans feel very Halo-esque in their tactics and style of attack.

This could well be a case of if you liked Halo before, you’ll still like it now. If you didn’t like it then, you still won’t like it now. Then again, were we expecting anything different?