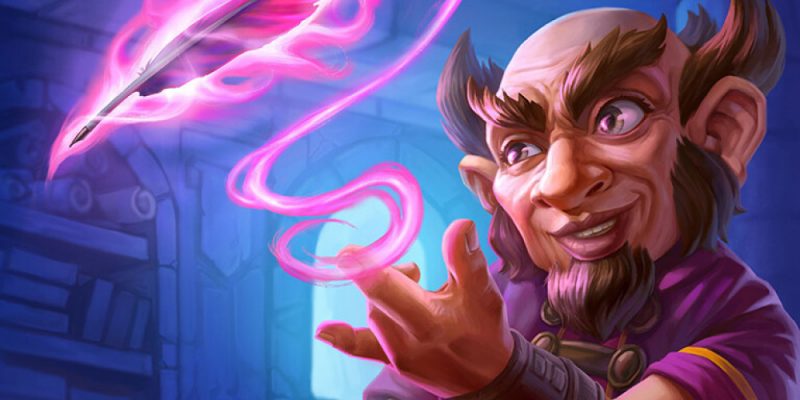 Today, Blizzard revealed the patch notes for patch 20.0.2 coming tomorrow to Hearthstone. It’s set to bring a load of balance changes to many cards and modes, as well as addressing some bugs.

There are quite a few changes to many the key cards in the Standard meta. The biggest and most notable being Deck of Lunacy. Previously costing 2 mana, the patch will bump Deck of Lunacy’s cost up to 4. Transform cards always seem to be a problem for the meta in Hearthstone. However, casting such a powerful card for only 2 mana was a bit too much. Deck of Lunacy is still a good card, but now it won’t be causing havoc as early as turn one or two anymore.

Sword of the Fallen is being lowered from 3 Durability to 2. Its ability to play so many secrets in the very early turns of the game was just too oppressive. Now decks that face it won’t have to be staring down four or more secrets on turn three. Jandice Barov is being bumped up to 6 mana from 5, now that the Core Set refresh has left her with a much more robust card pool to work with. So, future-proofing her now is probably the smartest idea moving forward.

Pen Flinger now only deals damage to minions, instead of any target on the field. According to Blizzard, it was way too easy for Pen Flinger to deal massive chip damage to minions and player — a welcome change, really. The last big changes to card effects for this patch is for Far Watch Post and Mor’shan Watch Post. Both cards have had their health lowered by one: to 3 and 4 respectively. This will make both cards much easier to deal with in the early and midgame. Will the turn one insanity now end?

That is it for Standard in the new Hearthstone patch notes, but some key cards in Battlegrounds and Duels also received some significant changes. If you frequent those formats it is highly recommended to check out the full patch notes. A good amount of bugs are also being fixed with this new patch. There are some pretty significant changes to mind, including ones where card effects would not trigger when prompted.

Patch 20.0.2 goes live tomorrow on April 13. It still remains to be seen how much these changes will effect the meta, though — especially now that the new Grandmasters season has begun. But these changes, especially to Deck of Lunacy, can only be good for the game.