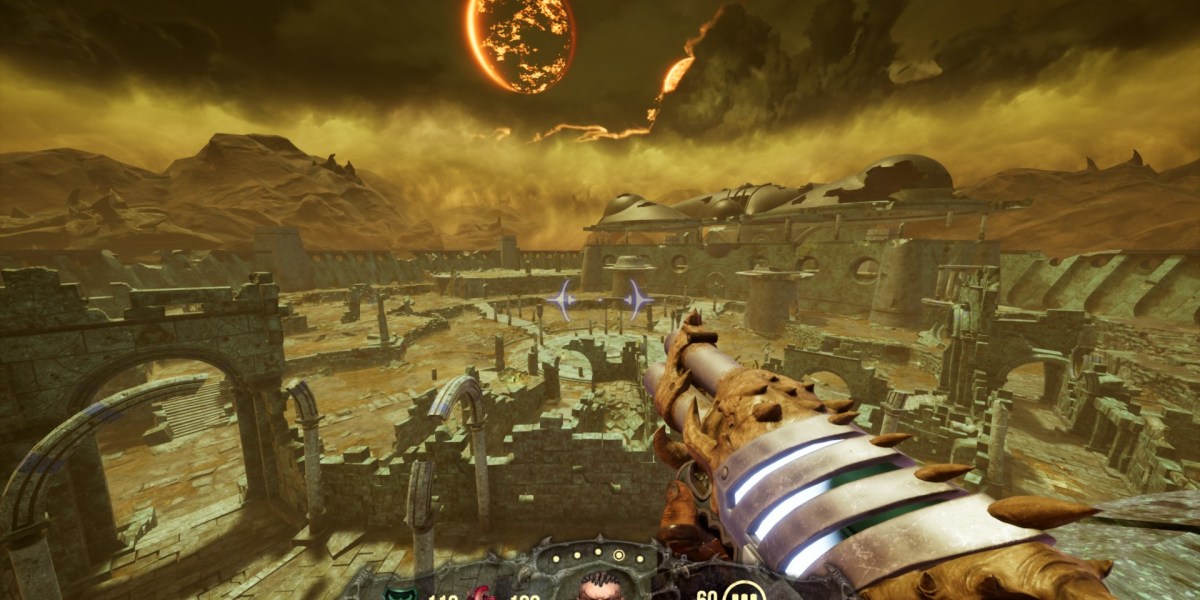 I had high hopes for Hellbound for quite some time. I’d put hours into its survival mode and was looking forward to the final product. After multiple delays, I assumed that we’d not only be getting something that massively expanded upon the tiny taste we’d been given, but that the game would be a meaty offering indeed.

Unfortunately, that isn’t at all what we got. After only a couple of hours with Hellbound, I hit the end credits. Not only is the game insanely short, but it’s shorter than the first Doom. That feeling of brevity also applies to the enemies and weapons on hand. At best, it feels like a third of a game. At worst, it feels like shareware. What’s on offer certainly isn’t bad, but anyone expecting a complete game is going to walk away horribly disappointed.

Hellbound is light on narrative. The only story on display shows itself during loading screens. You play as Hellgore, who has been brought back from the dead by humans and sent to wreak havoc on those that wronged him. Aside from the paragraphs introducing each level, you’ll also get to listen to Hellgore spew lazy, cliched one-liners in a distorted voice. He brags about how he’s good at “killing motherfuckers” and the like. It gets tiresome immediately. 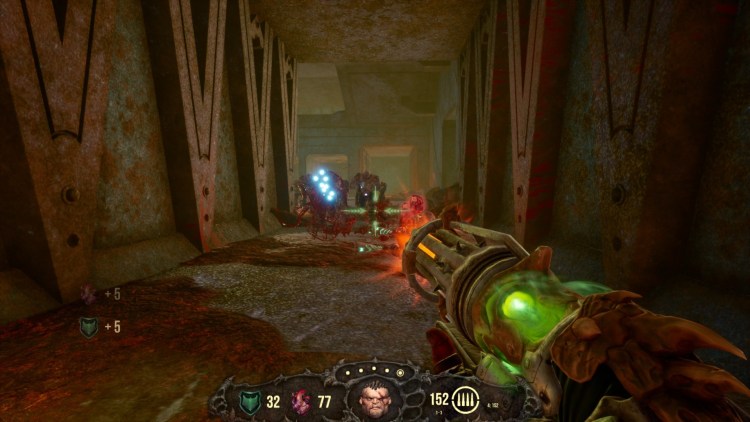 Hellbound has no personality of its own. The word ‘fuck’ even appears in the menus just to show how desperately edgy the game is. It comes across like a grade-schooler who’s trying too hard. This extends to the game’s general aesthetics as well. But compared to other recent throwbacks, the levels themselves pale in comparison. None of the levels have anything resembling a sense of place and most of them aren’t memorable; everything blurs together in a sea of oversaturated reds and greens. Huge spaces are devoid of landmarks or anything valuable or interesting. The levels themselves are often poorly signposted. Interacting with switches will often activate something you can’t see, so you’ll have to press it and run around until you find out if a door was briefly opened.

At least your desperate sprint is good on the eyes, as Hellbound is decent-looking for an indie shooter. Levels are large and the textures are detailed and high resolution. Most throwback FPS games tend to try and look like older games, but this one takes a stab at modernity. The game runs well too, as it’s not particularly hard to get over 100 FPS at 1440p with mid-range hardware.

If you’ve played the original Doom, you know exactly what to expect from Hellbound. Each level is self-contained and filled with enemies and secrets. Your primary goal is to track down keys and use them to open doors. Levels end when you interact with a switch or something similar. Then you’re taken to a screen that imitates the area maps from the original Doom, par times included. I take no issue with any of this from a design standpoint. I still consider that classic game to be immensely enjoyable and often find myself replaying it to this day. 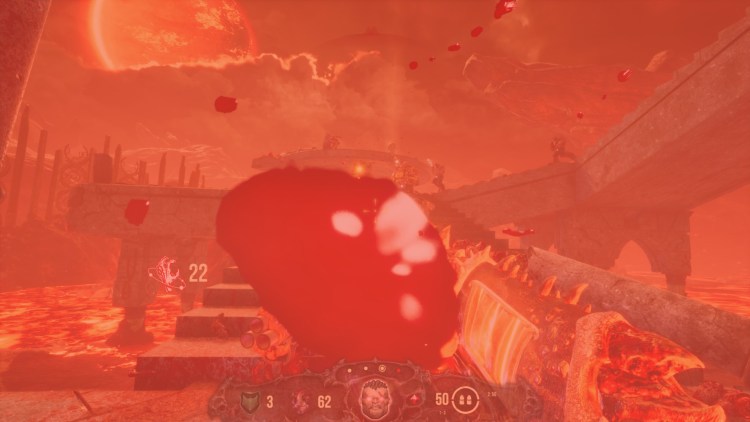 Hellbound mostly has the typical suite of FPS weapons. Or most of them, at least. You can melee with your fist (which is pointless) or a blunt weapon that kills most enemies in a swing or two. Then you’ve got a pistol, shotgun, machine gun, and rocket launcher. And that’s it. The weapons feel okay for the most part, even if the pistol and machine gun don’t have much weight to them. The shotgun is what you’d expect, though, and can be fired with either single or multiple blasts. But this is possibly the most barebones arsenal I’ve ever seen in an FPS save for Wolfenstein 3D.

The enemies fare even worse. There are only three kinds of enemies: dudes, demons that throw fireballs, and demons that run around on all fours and hit you with a melee attack that does way too much damage. The dudes vary in that they each carry one of Hellbound‘s weapons. They’re not interesting to fight, nor do they have memorable designs. The demons are similarly bland. Fighting them is braindead simple and unchallenging, save for the melee demon, who is only a threat because its damage is so badly balanced. And that’s it for the whole game.

On the first episode

The game ends with a mediocre boss battle against a huge enemy. Imagine the most basic final boss battle you can and you’ll probably be quite close to what Hellbound offers. You fight a big demon who is aided by constantly spawning enemies, dragging down the frame rate. You circle strafe and shoot him until he dies. And then the game is over — just a couple hours after it started. Upon realizing it was a boss level, I thought it was the end of the first of three episodes. But, nope. 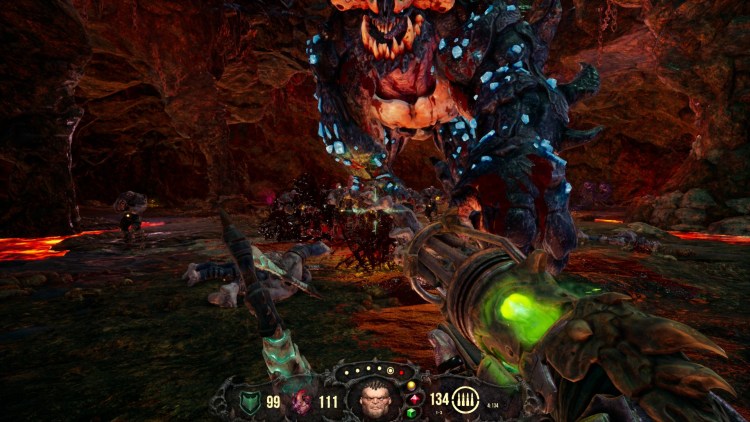 Once you’re done with that, four survival maps await you. If you’ve already played Hellbound‘s free survival mode, you know exactly what to expect. You run around an arena and fight waves of enemies to try and get a high score. Strangely, the already-existing level from the survival mode isn’t available here. More surprisingly is that these stages are somehow worse than that one. The enemy distribution isn’t balanced well at all.

It maintains the same structure as before, giving you a new weapon the first five rounds and adding super enemies. But it spawns enemies that you likely won’t have the right guns to face. Unlike the standalone level, the melee demon shows up here, even when you have nothing but the pistol. Taking one or two of them out with a pistol is far from ideal and will leave you with your ammo depleted. It’s not hard, it’s just subpar.

At least the movement and general action flow in Hellbound are solid. The game is fast and, when it throws enemies at you in hordes, it can be entertaining enough. But the campaign levels make poor use of this mobility. Encounters that get your blood pumping are few and far between. Most of the game is spent wandering the empty, large levels looking for a way to progress. If anything, enemy encounters are too infrequent. Not that the extremely low enemy variety won’t have you getting used to them within the first 45 minutes. 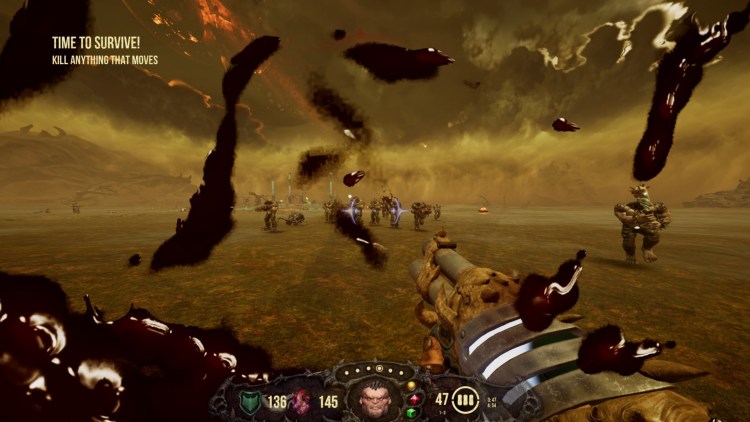 Hellbound could have been worth playing if it was a more complete game. But it isn’t even worth mentioning in the same breath as games like Dusk, Ion Fury, or Amid Evil. What we’re left with is a fairly pretty but extremely short game with mediocre level design, no enemy variety or interesting weapons, and not an ounce of creativity or imagination on display. Sure, it’s $15 USD, but two of those aforementioned modern classics retail for $20 and are beyond better. It isn’t a bad time, but I can’t say that it’s anything but a disappointing one.

Hellbound has really good movement and the texture quality looks nice, but it's insanely short, the level design is mediocre, and there's nothing here that FPS fans haven't seen done better for decades.