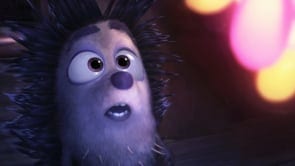 Virtual reality is opening so many doors, and it can be overwhelming. It promises to contribute so much to how we experience different forms of media, putting us right in the middle of the action. Oculus is aiming for that, and a lot more.

It’s tempting to give in to the futuristic, science fiction image of virtual reality, but Oculus Story Studio also wants us to consider the present. Being in the moment, actually empathizing with the character – one who isn’t on a screen that’s beyond reach, but right there beside you.

Oculus Story Studio is an internal team composed of former Pixar and Dreamworks members, and their pedigree shows a lot in the studio’s second short animation film, Henry.

Henry is a comedy directed by longtime Pixar animator Ramiro Lopez Dau, and it follows the story of a hug-loving hedgehog named Henry. As you’ve probably already guessed, hugs and hedgehog spikes do not mix, and that makes for a tough dilemma. What’s a hedgehog to do? Why, make a life-changing wish on his birthday, of course.

This short animation film project introduces advanced visual effects that allow Henry to interact with you, to respond to your movements, and to actually make eye contact with you. This is not innovative because he’s breaking the fourth wall; it’s innovative because there’s no wall to break. You are in the same room as Henry, and he knows you’re watching his story unfold. He looks at you as if seeking affirmation, or maybe even to check if you’re having fun.

Henry was introduced to the Hollywood film community yesterday, but the rest of us will get to experience his story when Oculus Rift ships in Q1 2016. The story is going to be narrated by Elijah Wood, and we can already tell that the Henry experience is going to have us feeling like little kids again.

World of Warcraft getting a new expansion, reveal at Gamescom