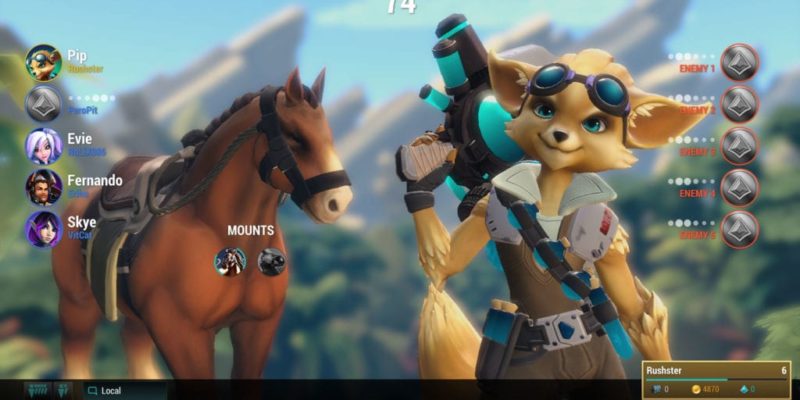 For some strange reason, Hi-Rez Studios has been accused of copying Overwatch with their own shooter Paladins.

Last year in August Hi-Rez Studios announced they were working on a new shooter called Paladins, it came as a pleasant surprise. In 2014 Blizzard announced Overwatch, and therefore by the laws of gamers, Hi-Rez must have copied Overwatch. Ludicrous I know.

Back in 2010 Hi-Rez created a game called Global Agenda, and I am mentioning that just in case anyone reading this is too young to remember it. It was a character based multiplayer shooter and a pretty decent one at that.

Hi-Rez Studios Todd Howards has now deemed it necessary to set the record straight and defend Paladins against claims from gamers that they are copying and cashing in on the success of Overwatch. A lengthy explanation was posted on Reddit by Howard to show where Paladins has come from and what it was influenced by. Remember, Overwatch is heavily influenced by games such as Team Fortress 2.

In 2012 we started another project named Aurum (AU), it was a Fantasy based Global Agenda PvP like game and the first inspiration for Paladins. You can see from the video link below how the style is cartoony fantasy.

In Paladins (code name Chaos) pre-production, we experimented with both the Global Agenda Sci-Fi theme and the Aurum Fantasy theme. After a lot of testing the project team decided to go with the Fantasy theme.

Overwatch was announced. We were shocked and not sure what direction to take. We were already so far along with Paladins, but we didn’t want to compete directly against Blizzard.

We initially tried to find different ways to differentiate on game-play (different TTK, different style maps and game modes, different theme, etc), but the feedback from our tests, stats, and surveys showed that only a small part of our population was enjoying that style of game. In the end we said screw it and just made what we thought best, and closest to our original vision, even if people would think it’s too close to Overwatch.

We created almost all the Paladins classes and abilities using Global Agenda and Smite as our template. We used our Aurum fantasy theme from 2012 and Smite characters as placeholders (although some like Grover the tree just stayed).

As a last point, it would be almost impossible for a studio of our size to ‘clone’ Overwatch in a year, but Overwatch did have some nice features that we decided to incorporate into Paladins (Kill Cam, Improved Lag comp, some verbiage like ‘eliminations’).

While Overwatch is a fine game, we want people to understand that game development is an iterative process with many ideas coming from past projects. This is true for Hi-Rez and almost every other game studio. For a hero shooter, the game that deserves the most credit for the genre is TF2.

Given the popularity and marketing of Overwatch many people don’t even realize that some classes like Ruckus (Mech) were playable in Paladins before similar Overwatch class abilities were shown.

Howard then goes in to cite some examples of classes taken from Global Agenda and moved into their new shooter. He also links to videos of the 2012 build of Aurum which was their foundation for Paladins.

Blizzard themselves are not particularly innovative, but they do polish their games so well that the quality shines through. With that in mind, it’s crazy to think that a game such as a Paladins is being criticised for copying Overwatch when ideas are used across all games and all genres.

Having played both Overwatch and Paladins this year, of the two, Paladins is the more exciting game in my opinion. It’s also free. But that’s just my opinion on the matter.