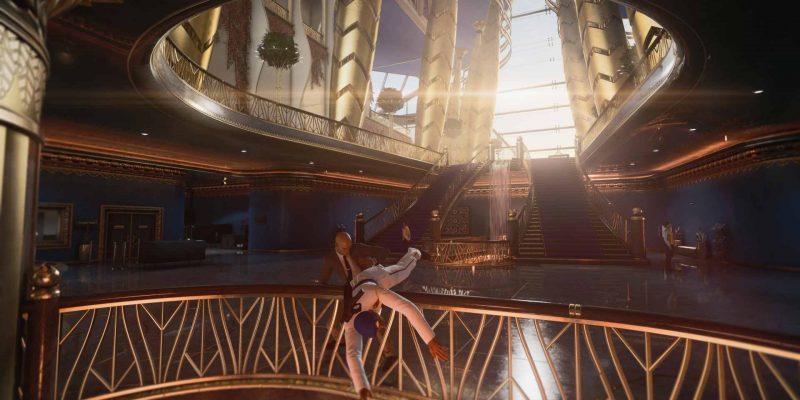 We had a chance to preview Hitman 3, while speaking with members of developer IO Interactive. Hitman 3, the final chapter in the World of Assassination Trilogy that began with the 2016 reboot of the franchise, literally dives straight into the action. Players once again step into Agent 47’s shoes, picking up where the previous game left off, and skydive off a cargo plane alongside his ally Lucas Grey to infiltrate the top of a ridiculously tall building in Dubai and take down the powerful shadow organization, Providence.

There’s a lot for new players to take in. Naturally, this is one of the reasons why Hitman 3 includes the campaigns from the first two games. As a bonus, unlocking all the locations across the three campaigns allows you to use all found items in them, meaning that a Hitman 3 weapon can be brought to a Hitman 1 mission.

“I would say that Hitman 3 is first and foremost for our core fans. That’s how we started the development of the game,” the game’s executive producer, Forest Swartout Large explained to PC Invasion. “We hope it’s a good experience if [new] players choose to join Hitman 3, but the real journey begins with the game that released in 2016.”

Hitman 3 — a preview of things to come

Walking straight back into the World of Assassination with an early build of the game was even a bit overwhelming for me. I haven’t played Hitman in months. That’s not to say that there aren’t a few built-in tips and hints to get started with the new gadgets in Hitman 3. You can’t dial down the difficulty to ease your way in if you want to jump straight into the finale, but there’s not much in the way of exposition or recapping. So, if you don’t know or can’t remember who characters such as Lucas Gray are and what Providence is, then you might end up being a little lost as the story plays out. Especially since Hitman 3 puts a greater emphasis on storytelling.

“For the conclusion of the trilogy, we really wanted to bring the story into the game,” she said. “It’s not super heavy-handed, but we didn’t want it to be where players could just skip through it. We want players to experience the story as we intended.”

The intended target: one of the Providence heads. However, the head unexpectedly departs the scene before you land on The Sceptre, which happens to be the tallest building in the world — its top poking through the clouds. So, Agent 47 has to adapt and switch to two targets who deserve some killing. 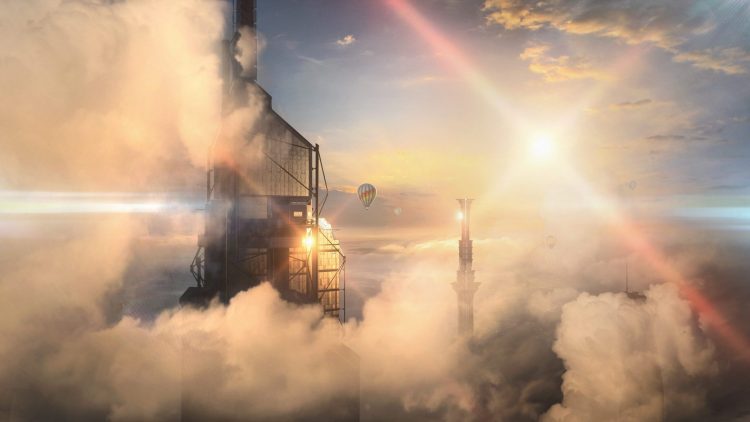 As I walked around the outside of the skyscraper, I was introduced to my first new gadget: a high-tech camera phone. The multifunctional device allows you to scan and hack electronic locks and computers in addition to scanning for clues. In this case, I used it to open a window so that I could get inside. Aside from a couple of new toys, the majority of the game may feel familiar to veteran players. It’s like slipping into a well-worn disguise to poison a few drinks all over again.

The Sceptre helps establish the large scope of the game’s different locations. Players have to do quite a bit of exploring while eavesdropping on conversations. And all the while, keeping a watchful eye out for potential disguises, weapons, and potential traps that will help take out targets while staying undetected. Side objectives such as stealing information or posing as a specific person are peppered in. But the game is still a violent sandbox puzzle game where players have to figure out ways to help targets meet their untimely demise.

“There are key moments that keep you up-to-date with what’s going on,” he explained. “That could be an introduction sequence at the start of a mission or a moment partway through so that you can keep up with the story.” 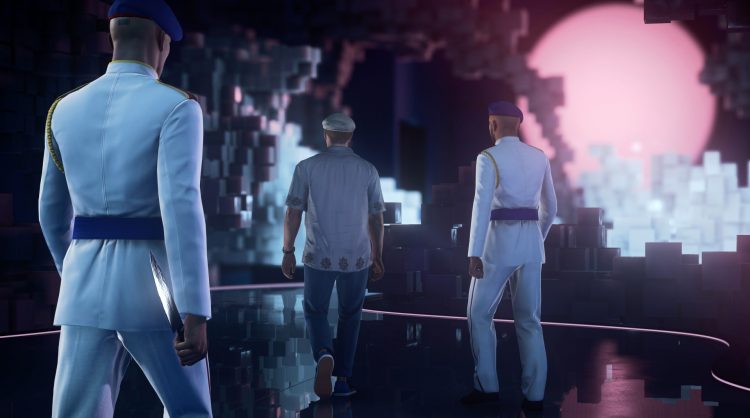 Info icons appeared as I took in my surroundings, directing me to prominent characters who might serve as useful disguises. Gray would sometimes speak into the radio as I triggered different events to give me some background on characters and point me toward secondary objectives. There was a VIP who was giving the guards trouble because he refused to be searched. Although he seemed interesting, I decided to take a more traditional route and knock out an unsuspecting guard and steal his uniform before stuffing him in a conveniently-located closet. That way, I had both the freedom to walk into restricted areas such as the security room while carrying a gun.

As with previous games in the series, playing Hitman 3 can require quite a bit of patience. It’s usually easy enough to locate targets, but then you have to figure out ways to eliminate them without getting caught. This can range from shooting them outright and dealing with the violent consequences, to using a crowbar to drop heavy objects on them. You can also sabotage equipment to set up elaborate ‘accidents’ as targets move through. Much of it has to do with a blend of timing and opportunity. Some of the more complex traps require extra exploration to find the required components.

“We tried to bear in mind that players will play how they want to,” Large said. “We might have players who only want to play hard stealth, with guns waving, or only the mission story. We’re always keeping those different play styles in mind as we’re developing locations and missions.”

Hitman is about the players and offering a deep and wide toolbox for them to approach the targets in whatever way they want,” she added. 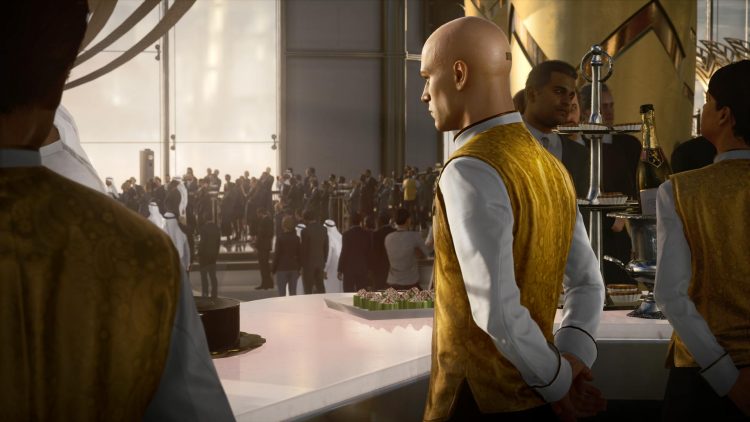 Setting up traps can take a considerable amount of puzzle-solving, which can involve quite a bit of trial and error. For instance, I found the components needed to overload the on-stage electrical system, but the readings indicated that the power output was in the ‘safe’ zone. Taking this to mean that the trap wasn’t deadly enough, I began looking for ways to put more juice into the system. That’s when some unsuspecting people went wandering onto the stage and got shocked to death. It was my cue to move on to other means, but at least now I knew the trap worked.

It was while exploring the service hallways that I discovered my first shortcut, which are typically barred entryways that can be permanently unlocked for future playthroughs. This proved to be quite useful when my cover was later blown because I picked up an item that was incompatible with my disguise, causing all nearby guards to descend and open fire on me. Armed with better knowledge of the building’s layout, I was able to take out both targets on my second playthrough before skydiving off the building for my spectacular escape. Then it was off to Dartmoor to continue searching for the head of Providence.

In total, Hitman 3 features six globe-spanning locations at launch including Dubai, Dartmoor, Berlin, and Chongqing. At Dartmoor, England, I had to find a way to break into a gigantic, heavily-guarded mansion, which should be a familiar situation for experienced Hitman players.

What struck me most about this location, apart from the elaborate layout and opulent furnishings, is how the game helped streamline some of the multitasking involved with planning the perfect hit. For instance, an event window popped up while I was roaming through the hallways in my disguise, looking for ways to set up an elaborate accident. It showed my target giving a speech, which left her vulnerable. I immediately ran to the room where I was practically face-to-face with her while she was surrounded by guards and onlookers. 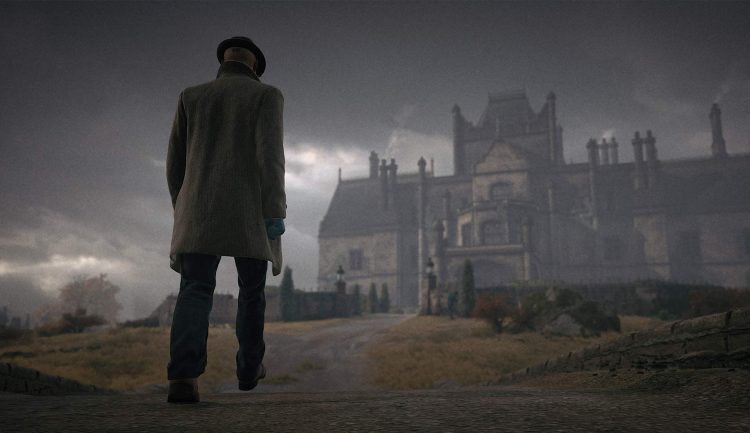 “We wanted to have some extended, close-up moments with the targets,” Large said. “We spend so much energy crafting these super interesting targets with their own flavors and stories. With Hitman 3, we wanted to make sure that players have one or more opportunities to get very close to them – and I don’t mean to push them off a rooftop. I mean, really extended engagement with the target.”

I could have ended her and faced the consequences, but I decided to let things play out instead. Given the right disguise, I could have probably walked right up to her for a conversation, which is interesting because I’m usually not prone to chatting with the people I’m preparing to assassinate. But at the same time, it fits with Agent 47’s shifting role as an assassin, spy, and thief. Why not add investigator to the list?

I won’t spoil how the encounter turned out or what crazy disguises and elaborate traps I managed to find, but I will say that it’s an unusual mission that requires a ton of exploration and puzzle-solving if you want to get the most out of it. You’ll have to discover the rest when the game releases.

Hitman 3 launches on January 20 for PC on the Epic Games Store and Stadia.

By Andrew Farrell1 day ago
Interviews