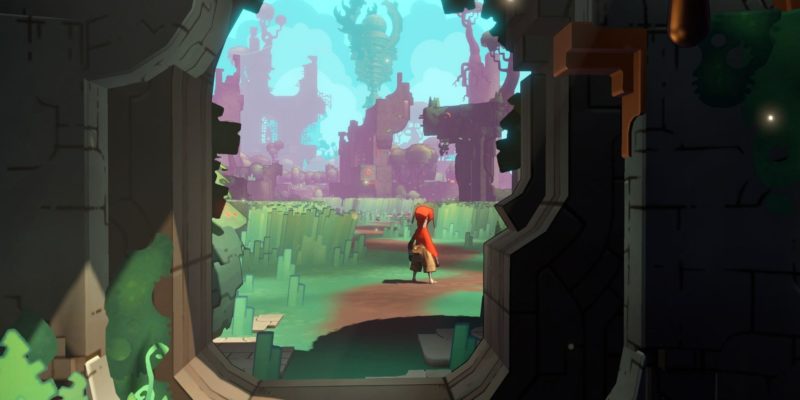 Runic Games are back with a new game, and no, it’s not Torchlight 3. That’s something their fanbase will have to keep hankering after for now. But let’s put that aside and forget about Torchlight because this is HOB, and it’s nothing like their previous two ARPGs. This is an action adventure/platformer.

HOB follows the story of a small hooded character  in a rather strange world; one you’re free to explore and discover. Our adventurer has a pretty rough start in the world, but it’s not long before he/she is fixed thanks to a friendly robot you meet early in the game. That same robot also provides our main protagonist with a new powerful fist.

As alluded to, HOB is a mix of puzzler, action game and platformer. It’s a mix Runic has managed to blend together brilliantly, and that’s helped in-part by the fact there is no dialogue at all. Like all good games, HOB teaches you the mechanics as you play with little need for direct exposition. Players are (at first) gently guided by the grunts and hand gestures of your robot friend; and that’s all it needs, because this is a game that’s easy to pick up, play and understand. 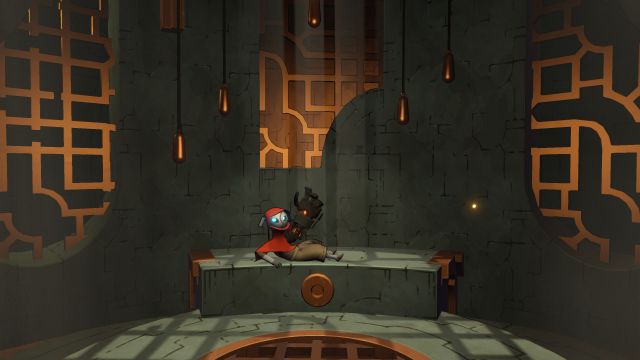 What? I was only out for a minute and now I have this thing!

The vibrant and colourful HOB world is gorgeous. It’s also incredibly cleverly designed. Players are guided through the first section of the game, but after about 30 minutes Runic rely on the players to pay attention to the world around them. To progress there are key actions that need to be completed, there are hidden objects to find, and there puzzles to solve.

Exploration will also bring new powers. HOB has a blueprint and enhancement system to help make the character more powerful. Via a main underground lair, which can only be accessed at specific locations in the world, our hero can purchase improvements to make it easier to defeat some of the obstacles in the world. These upgrades require resources which can be gained from special monoliths, activated with a simple hand press. Resources can be scarce so every nook and cranny should be explored. On more than one occasion I completely missed some easily obtainable resources. With some more searching I found all kinds of goodies to boost my powers and help in my quest. It pays to look around.

I’ll admit after around an hour of play I got stuck. I couldn’t figure out where to go, but that was all my own fault. I had simply missed a wall which I could break to continue the adventure; a valuable lesson in paying attention to the environment. It’s not difficult to keep an eye out once you have vague idea what to look for, and the world is a joy to romp around in. With the help of a map, which is obtained near the start of the game, it’s hard to get genuinely lost.

Let’s have a nice sit down.

Combat plays its part in HOB too, and there are numerous difficulty settings to choose from. Fighting is mechanically straightforward enough; pull out the magical swords and hack away at some weird and wonderful creatures which can drop health. Health gets eaten away with each hit though, so after three complacent strikes you could be out and find yourself respawning. Falling from height is also a potential killer. On that note, using a controller is probably the best option instead of the keyboard/mouse, as the latter can feel a little clumsy in tight spaces. In my case the Steam controller worked brilliantly.

Throughout the world there are checkpoints which are indicated by sliding stone structures. These are activated when you walk near them, which can actually be a bit frustrating. Because Runic want you to explore, more often than not you will have to retrace your steps to progress, but should you go the wrong way and pass close by one of these save points it will save that as your spawn point. This means that if you die you will start at that ‘older’ spawn point, which could be further away from where you actually should be going. 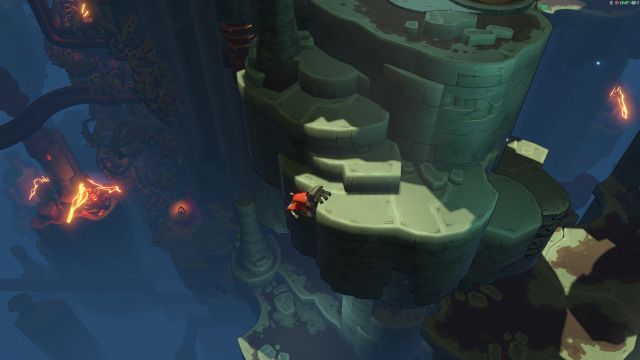 Whoah! That was close!

Abilities and augments to your character’s fist are discovered throughout the game world. By slipping the hand into mechanical devices dotted around the world a new power can be gained. Eventually, the fist will be able to smash through weakened walls and floors. You can also teleport short distances or use the launch pads to move around between key points. Extra abilities such as a shield can be added too, depending on how much resource you have gathered. There’s a lot to enjoy.

The whole world of HOB is one giant puzzle and the world has to be changed and shifted to progress. This involves finding switches, pulling levers, punching walls, and sliding blocks; all of which can all transform the landscape or open up new underground areas. There are usually small hints in the environment to show what might happen if you find a switch, often indicated by an unreachable climbing wall or a key objective visible in the distance. Again, it’s all about paying attention to the environment.

It would be remiss to not mention the game’s audio. The soundtrack comes from the excellent Matt Uelmen who has written music for not only Runic’s previous Torchlight games but also Diablo. Uelmen has once again demonstrated his brilliance with HOB and it really completes this game. 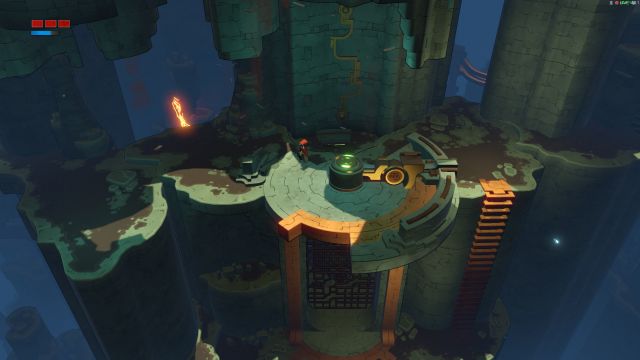 What does this giant switch do?

HOB is not the kind of game I usually play, but I have had a fantastic time with it. The combat is quite simple and is probably the game’s weakest element. Exploring and discovering is what HOB is all about. Runic know they have created a fantastic world because they’ve specifically added special vista points where you can sit, soak up the scenery and enjoy the soundtrack.  HOB is a gorgeous game with great characters and brilliant animation, all set in a fantastic mechanical and organic world that changes as you play.

Runic Games take you on a wondrous mysterious journey through fantastic environments making HOB well worth your time.