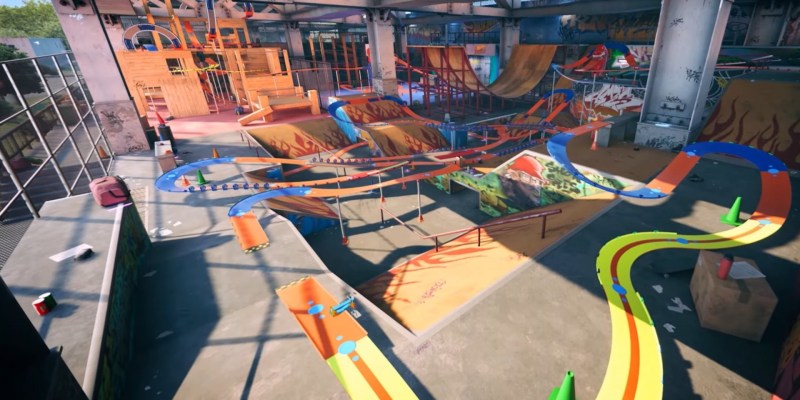 Racing game developer Milestone Interactive just dropped its latest trailer for the upcoming Hot Wheels Unleashed. Over the last month, it has revealed various tracks that will feature when Unleashed releases in September. First up was the Skyscraper reveal and then the College Campus circuit. The latest trailer has revealed that Hot Wheels Unleashed will also feature a Skatepark circuit.

The ‘Hot Wheels Unleashed Skatepark Unveil’ trailer provides both a cinematic and gameplay perspective reveal of the course. A highlight of the reveal is that this circuit begins with you driving out of the mouth of a T-Rex. As its name would suggest, the background theme of this track is an urban skatepark.

The latest track reveal doesn’t just show off Milestone’s aesthetic choices. Three gameplay mechanics play a part in the trailer too. For one, this is the first time we’ve seen track obstacles in play. The obstacles shown are a swinging barrier that blocks one path at a time and fans on the side of the circuit that attempt to blow you off the track.

A third Hot Wheels Unleashed mechanic can be seen when the cars drive over certain parts of the Skatepark. These areas are marked with plus symbols and greatly increase your boost when driven over. Boost is gradually built up over time slowly but this is an effective way of speeding up that process.

Last April, Milestone held a live stream going over what gamers should expect from Unleashed. The racing game’s lead designer Federico Cardini claimed that it will launch with over sixty cars with “many more,” coming post-launch.

The Skatepark trailer as well as the other Hot Wheels Unleashed content we’ve seen marks an important milestone for the toy car franchise. Back in the noughties, several popular Hot Wheels games were released like Velocity X and World Race. However, in the more recent years, the series has been limited to side content such as Forza Horizon 3‘s Hot Wheels expansion. When it releases in September, Unleashed will become the first significant game to represent the Hot Wheels name since 2007’s ‘Beat That!’.

All of the new weapons, changes to existing weapons, and crafting mechanics in Fortnite Season 7