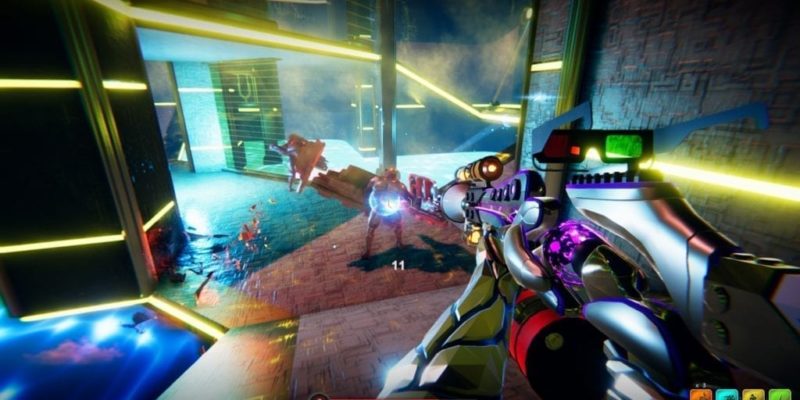 Hypergun is a game about saving the world. Sort of. The roguelike shooter from developer NVYVE puts players in the shoes of humanity’s last hope. But instead of clobbering the alien forces assaulting Earth, Hypergun takes place in a top-secret training facility.

As Dewey Owens, players will test experimental weaponry by fighting through waves of digital enemies. Your mission involves utilizing weapon components in different simulations as a method of determining which guns have the potential to halt an alien invasion. It might not sound as glamorous as fighting on the front lines, but after watching Hypergun‘s recent gameplay trailer, it’s clear that Dewey’s arsenal is no joke.

Functionally, Hypergun is a roguelike first-person shooter. Dewey’s job as an intern at DevTech Labs means he can hop into different, procedurally generated simulations with ease. His goal is to create the ultimate alien-destroying weapon, a mission made possible thanks to the game’s modular gun attachments.

Hypergun has over 150 different attachments, each of which sounds more insane than the last. According to NVYVE, Dewey can create guns that fire purple beavers and deadly saw blades or turn run-of-the-mill submachine guns into nearly unrecognizable instruments of chaos.

The combination of roguelike level design and modular weapon attachments fits nicely with Hypergun‘s in-game fiction. Because Dewey’s an intern at a weapons company, it makes sense that he’d grind runs in ever-changing simulations. The game’s neon-soaked visuals inform this design choice as well. There’s an alien threat knocking at humanity’s door, but before tackling the invaders, someone needs to destroy their digital incarnations.

From intern to lawyer 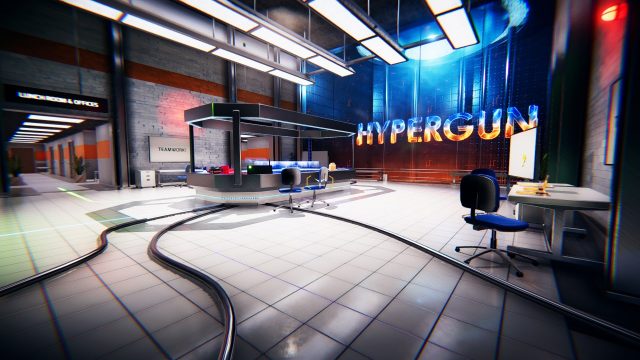 Dewey can wander through DevTech’s facilities at night.

Roguelike levels and absurd weaponry aren’t all that Hypergun offers, either. Outside of the simulation levels, Dewey can rifle through DevTech employees’ emails and bug reports. In doing so, players will uncover snippets of information detailing the company’s history and their overarching plan to stop the alien invasion. It sounds like a neat method of adding story elements to a fast-paced shooter.

Although he starts the game as an intern, Dewey can also climb the corporate ladder. According to the developer, Hypergun has different playable classes, with corresponding job descriptions and weapon loadouts. The Intern class, for example, has an SMG, sprint skill, and the ability to spill coffee on enemies. Unlocking The Lawyer lets players start with a shotgun and a series of skill-boosting buffs.

Hypergun‘s embellished take on weaponry and waves of simulated enemies seem designed to create an overwhelming experience. It’s a shooter built for sensory overload, and it’s scheduled for a PC release on August 23. That’s plenty of time to start training.