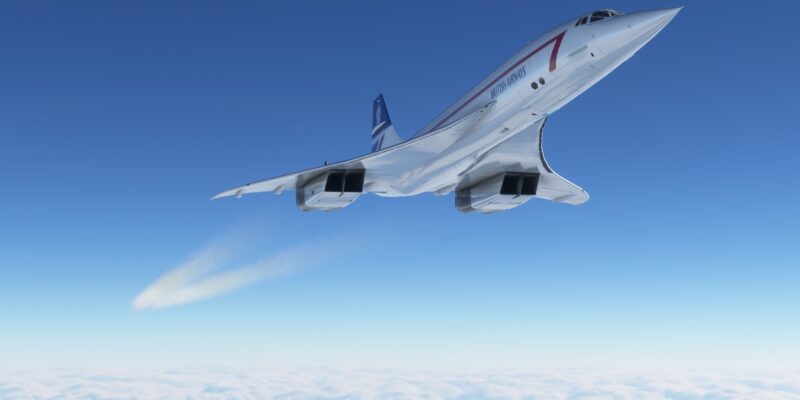 An absolute gem from the height of the jet age will soon be brought back to (virtual) life in the finest of details by means of the work being done by the DC Designs team. For several months, the developers have been working hard to build a high-quality rendition of Concorde that will be fully functional and modeled both inside and out for Microsoft Flight Simulator.

The supersonic jet is still currently a work in progress, but it has been coming along steadily. DC Designs hasn’t revealed a release date yet, but has been providing a steady flow of updates and development screenshots, along with a price being recently announced.

The ill-fated British-French Concorde project is considered to be one of aviation’s greatest achievements, while also being one of its costliest flawed ventures. The Concorde was designed to propel the future of air travel with supersonic passenger transport operations, cutting down the time of long-haul transoceanic and transcontinental flights by several hours. But, its high maintenance and fuel costs, along with the sound pollution—caused by its character-defining supersonic capabilities—all played into its ultimate demise.

Concorde never sold very well, and to make matters worse, its safety record was marred by several catastrophic accidents. This all resulted in it being formally retired in 2003 after 34 years of active service. Thankfully, it has never left the skies of the flight simulation world, and now will continue to live on in the modern world by means of Microsoft Flight Simulator.

In the February 4 development update from DC Designs, one of its main members discussed an intricate part of this project: the jet’s fuel system. Concorde’s complex network of “13 tanks, 160 connecting fuel lines, 38 pumps and 34 valves” have all been faithfully coded into the model and will be fully functional via the engineer’s panel in the cockpit.

Additionally, work is being done on the Concorde’s “vast electrical and hydraulic systems so that they can also be connected up to the relevant animations, further increasing the realism possible with this aircraft.” Indeed, DC Designs is taking the realism factor up a notch with what is shaping up to be one of the most hands-on, complex aircraft to come to Microsoft Flight Simulator yet.

Beyond cockpit operations, the aircraft’s beautiful interior is also being fully modeled and will even include interactive animated objects such as working doors. Simmers will be able to take a virtual “walk” through the cabin area and see the details up close and personal. Various shots of both the inside and outside of the Concorde have been released with this dev update:

DC Designs captured a lot of great attention a few weeks ago with the first in-game video of the Concorde. A short, but effective teaser demonstrated the development model gracefully lifting off from London Heathrow, an airport that the real life Concorde frequented.

As of now, there’s still no definitive release date for DCD’s Concorde for Microsoft Flight Simulator. However, it’s clearly making steady and beautiful progress. What is set in stone is its price—$39.99 USD for new customers and $36.99 USD for returning customers who own the older alternate version of the add-on for the Prepar3D flight simulator.

DC Designs’ Concorde is just one of many complex upcoming aircraft that will be soon making their way to Microsoft Flight Simulator. There’s also PMDG’s Boeing 737 Series, Fenix Simulations’ Airbus A320, and Asobo’s very own ATR 42/72 turboprop project that it’s designing in conjunction with Aerosoft — all just to name a few. Microsoft Flight Simulator launched with a tiny amount of true commercial airliners, but with add-ons such as these, the pool is filling up fast.