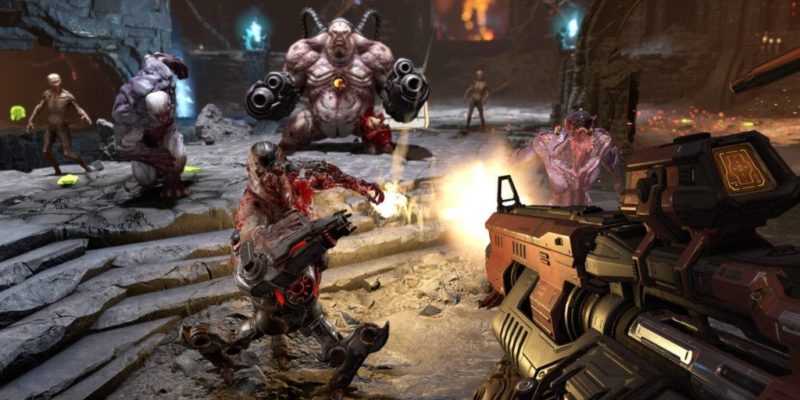 id Software’s upcoming Doom Eternal looks to be an excellent time, but we still don’t know too much about its multiplayer offerings. In a recent interview with Video Games Chronicle, creative director Hugo Martin and executive producer Marty Stratton got to talking about how the company hopes that Eternal‘s “Battlemode” becomes a big thing. Learning lessons from the failure of its competitive offerings in Doom (2016), id is ready to channel more of what made the reboot so epic in the first place.

The DNA of the Doom dance

“We took the DNA of the ‘Doom dance’ — the loop of one Slayer versus many demons — and turned that into a competitive, social experience,” Martin said to VGC. “When we had one Slayer on the battlefield and let players control the demons it felt really good. We’d rather provide players with an incredibly polished and engaging experience that’s really tight, than something that’s huge with a million modes — which is another thing we did in Doom (2016).” What Martin is specifically referring to is how Doom (2016) not only had the admittedly cool “SnapMap,” but also a traditional multiplayer suite that every other shooter comes packed with.

Stratton went on to acknowledge that Doom (2016) lacked this sort of ‘Doom dance’ in its multiplayer. For players who came to that game for the campaign, he thinks multiplayer instead “felt like a side cart.” That’s certainly true, too. I understand that id Software wanted, of course, to provide something different from its multiplayer. However, it lacked the spark of ferocity that accentuated the campaign mode. “In comparison,” Stratton said, “Eternal is entirely what [fans] want.”

As for whether or not the mode turns out okay, we’ll just have to wait and see. From the little I played of Doom Eternal at E3, the campaign seems to improve upon every aspect of the reboot. And yet, it also pays homage to the 1993 original. It really does come off like a true reimagination of what Doom is, even more so than the 2016 title. Even if the multiplayer ends up being a dud again, at least the campaign is primed to be exceptional.

Mortal Kombat movie is rated R and will include fatalities

Factorio developer unsatisfied with G2A after taking up chargeback offer