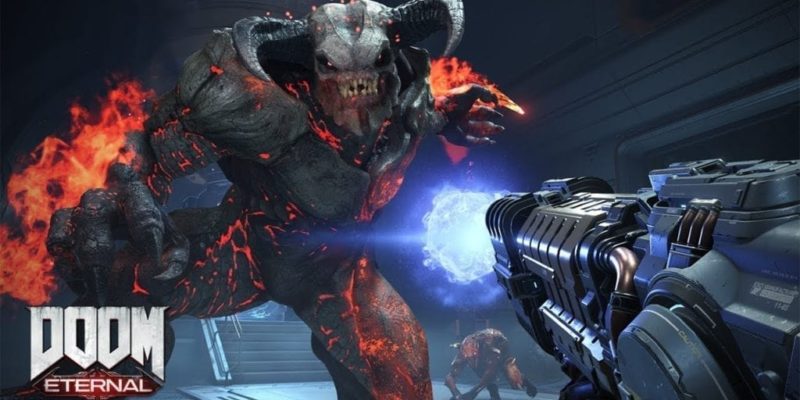 Alright, so there isn’t exactly 25 minutes of bone-crunching gore, but it’s pretty damn close. QuakeCon 2018 started today, and to kick things off Bethesda showed nearly 25 minutes of the Doom Slayer having a jolly — and bloody — romp in the first gameplay reveal of DOOM Eternal.

DOOM Eternal is the hotly anticipated sequel to 2016’s DOOM. The original shooter blew players away in a cacophony of blood and violence, tied together with a soundtrack that could shake the fillings out of your grandma’s mouth from 100 yards out.

Let’s not mince words; it was sick as hell. Naturally, we have high expectations of DOOM Eternal. Let’s check out the full gameplay reveal and break down what we saw.

As we already revealed earlier in the day, in the video we get introduced to the Ballista weapon. The Ballista fires a red-hot beam of energy that shreds demons. It also fires a spear that explodes. So, that’s cool. This inadvertently demonstrates the new “destructible demons” aspect of the game. That’s right, enemies will visually have their flesh and limbs torn from their frames as they take damage. Chunks fly away in every thunderous bellow of the Slayer’s super shotgun, revealing bloodied remains and rib cages.

The Slayer also has a couple of toys attached to his new armor. Like the original game, DOOM Eternal allows you to exercise some demons up close and personal with an instant-kill finishing move. Before, our boy in green would rip apart enemies with his bare hands and feet. However, now, the Slayer is equipped with an extendable blade mounted upon his left arm. He uses it to decapitate or impale demons in ways that would make a hardened marine blush. It almost makes me feel bad for them. Almost.

Some weapons also appear to be modular. The trusty single shotgun, for instance, has a swappable barrel that allows the Slayer to transform it into an auto-shotgun capable of turning even the biggest demons into piles of bloody hamburger. I like the change. 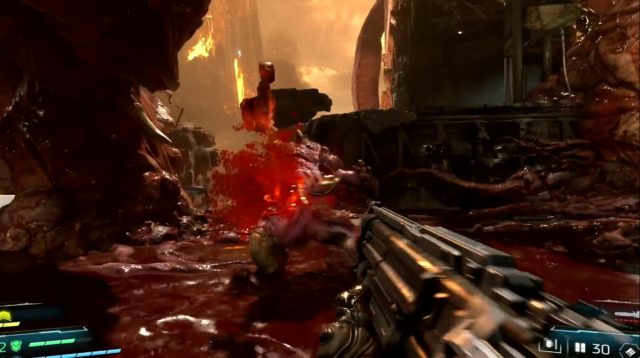 The auto-shotgun upgrade, for when you absolutely want demons dead.

Gravity is for the weak

The super shotgun recieved a bit of an upgrade as well. It now has some sort of blade attached to the bottom of the barrels, but you would be mistaken if you think the Slayer uses it so crudely as one would a knife. No, the blade is actually part of a grapple that fires out and drives itself deep into demons. The Slayer can then retract it, allowing him to get up face-to-face, or swing around the map — no doubt making a “WHEE” sound in his mind.

That’s not the only change to mobility. We also see an example of climbable walls, and a piece of bone (yeah, why not?) jutting out of a wall from which you can swing yourself up to greater heights. There is also some sort of rechargeable dash move employed by the Slayer. The dash should improve not only your ability to dodge, but, how quickly you can skirt around the battlefield.

No one puts Doom Guy in a corner

Near the end of the DOOM Eternal gameplay trailer, we watch as our friendly neighborhood demon slayer interacts with the general public. It goes… about as well as you’d assume. Most people are naturally terrified of the guy. But, who can blame them? It’s already been proven that the Slayer is the most capable–if not only capable–fighter the Earth has in its arsenal.

Still, it warrants a chuckle to watch as an annoyed engineer of some type grumbles aloud about some unwanted guest, only to turn and be faced with the meaty death god. He should have been a little more proactive in relinquishing that key card. A security guard later stops short of telling off the Doom Slayer, then meekly offers his weapon to more experienced hands. 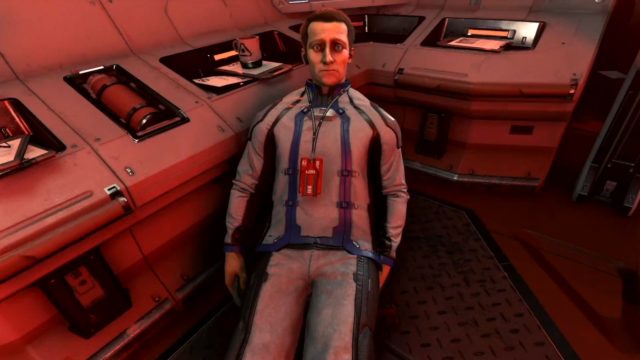 Poor guy should have worn his brown space suit.

There is a lot more to uncover and enjoy out of the gameplay reveal. So give it a look and see if you can spot anything we missed.

DOOM Eternal doesn’t have a release date yet, but we’re hoping to return to the violent hellscape before the end of next year.