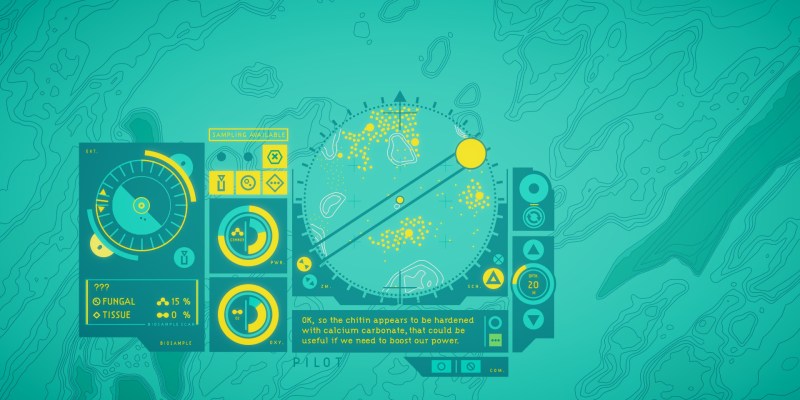 I was very much impressed by the tactile and minimalist experience of Nauticrawl, so it was easy for me to raise my hand when In Other Waters was being handed out. Was it the right choice? Well, it depends.

Who are you in In Other Waters? To the great consternation of one doctor Ellery Vas, you’re the AI driving her diving suit. She would love to be in control, but that’s how the suit was set up by Minae, the missing friend she’s come to find on this planet. But beggars and tenure-less academics can’t be choosers. So you’ll have to guide Ellery as she looks for her friend and catalogs the weird underwater life of Gliese 667Cc. 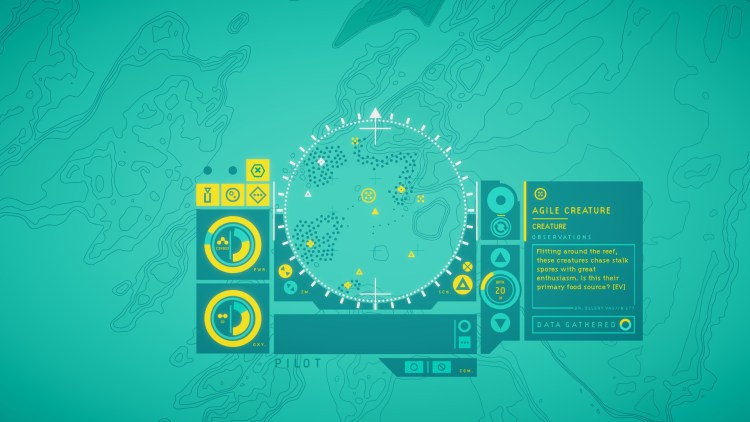 Enthusiasm? On my planet?!

In Other Waters is a somewhat minimalist, short game. It took me 5 hours, probably because I only noticed the shortcuts described in the “Esc” menu halfway through. There are only three of them, but they carry the lion’s share of work.

Sail the seven seas of In Other Waters

As a diver and explorer, you’ll spend a lot of time moving. However, In Other Waters constrains your movement a lot. There are no WASD controls here, only nodes on your sonar map. The game is in real time and the ocean fauna around you can move freely, but you can only go from node to node. And you’ll rarely have a great choice of them.

Actually, this mode of travel is one of the greatest failings of In Other Waters. When exploring unknown territory, you have to do a sonar scan to pick up new nodes. Then you have to click on the new node, which gives you a bit of flavor text. Then you click a button to switch to navigation mode, and then you can click another button to travel to that node. You can do it all with shortcuts, but it’s at least a click or two too many. Also, the flavor text window goes away while traveling, so you can’t even spend that time reading. 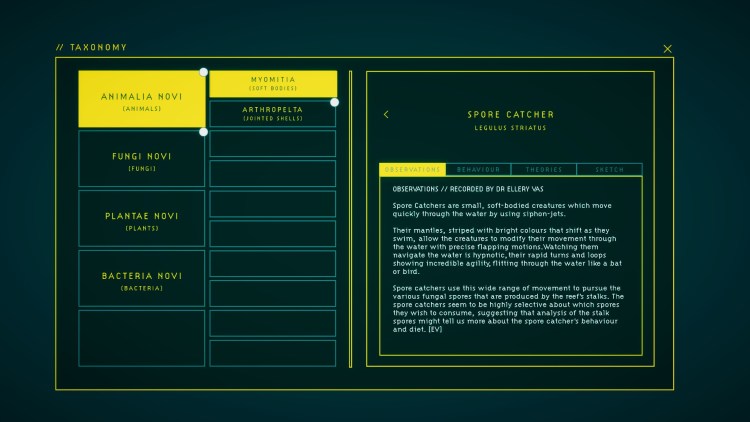 Reveal your secrets to me, you damn stalk.

This is one of the reasons why I hadn’t filled my Taxa meter above 55% by the end of the game. You see, while the game has a plot, it also tracks your taxonomy achievements. Whenever you spot an un-scanned critter in the water, they appear as white dots. Scan (that is, click on them) and they’ll change color. Click on enough critters of a species and Ellery will name them. This opens up the possibility of scanning their samples (collected via something that’s not even a mini-game — a quantum game?) back in the lab. But if Ellery hasn’t named the species yet, the scans will only return an error.

The ethical concerns of sampling

But the suit has a limited amount of sample space. Also, your diving suit can consume samples to refresh its supply of oxygen and power — the closest things to health bars you have in In Other Waters. So it’s a constant struggle to gather the samples you want to scan, samples you may need to feed into your furnace, and samples that have practical uses in the environment (like making stalks retract or expand).

Yet not all samples can be easily collected through plot-relation exploration. That’s why the ocean map is somewhat open-world. Once you deposit all your samples at the base and do whatever plot requires of you, you can choose one of the unlocked locations to dive back in. Ellery will have marked spots where you can find additional samples, so if you’re interested, you can dive in and go look for them. 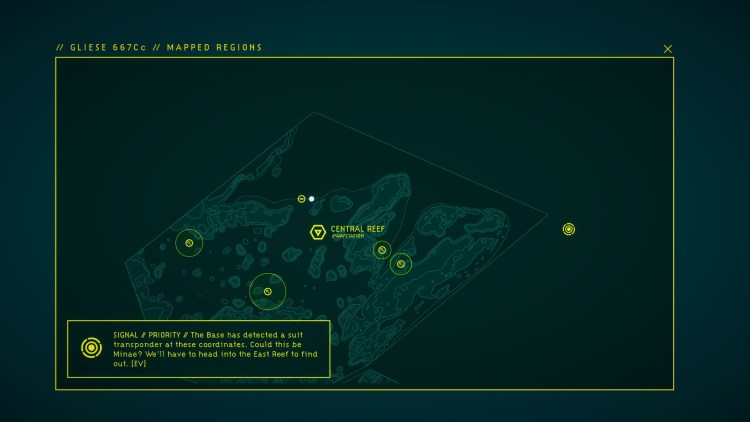 Or you can just beeline for the plot.

That is, if the game allows you. At some point in the game, I encountered an underwater obstacle. Later on, I found a suit tool that would allow me to bypass it. Did In Other Waters allow me to physically go do that then? No! Halfway down the node road to the obstacle, Ellery would pipe in and tell me to get back on track, blocking node movement and forcing me to return to the base.

But like I said, the movement and exploration is a little tedious, which discouraged me for doing additional taxonomy research. It was a bit different in Nauticrawl, as you weren’t just pushing interface buttons — you were interacting with levers and whatnot present in the crawler. So when you set the movement power and pulled that huge lever to move forward, you felt — via the sound and screen shake — the thing move. It was an entirely different experience.

This world has a face. A fishman face

You might still do taxonomic research out of curiosity or as a general science nerd. In Other Waters presents a new aquatic biosphere, and each species you catalog has four things to unlock: general description, behavior, theory (which actually explains what the animal does and how), and the sketch. The sketch is probably one of the more interesting bits. As the game is so minimalist, the animals and plants and whatever appear just as dots on a sonar. Sketches at least allow you to put some face on them. 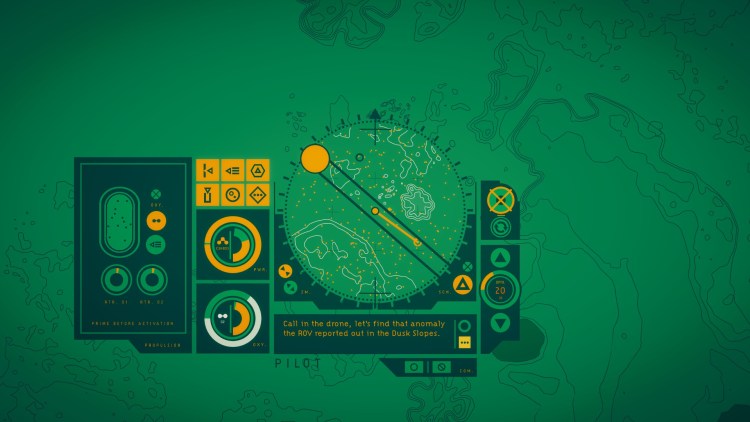 “I’m cold, wet, and you’re not following the plot. Call in the robot; let’s get you back on track.”

And when it comes to putting a face on either you or Ellery, there’s a very basic dialogue system present. Most of the time, Ellery will just be talking to you without any need for an answer. Sometimes, you’ll have the chance to answer with “yes,” “no,” or no answer. Also, since you’re an AI, you can freely rummage through Ellery’s diary/logs.

The writing in In Other Waters is generally good, if not very evocative. Anything that’s not about the local flora and fauna is somewhat bland. Meanwhile, the visual style is generally excellent. The interface is nice; the sonar world view looks interesting even if it isn’t terribly detailed. And the colors change along with the color of the surrounding water! All in all, the presentation is nice, even if the action is a bit lackluster.

In Other Waters is an OK game. It misses out on some things by not explaining the shortcuts or the fact that you don’t need to return to waystations to go back to base. I don’t know if I can say that it will stay with me for too long. The story is somewhat bland and inoffensive, and minimal controls are somewhat clunkier than necessary. The visual presentation of it all is a highlight though. I guess you can grab it if you want to replace Nauticrawl’s combat with the secret life of underwater bacteria.

In Other Waters is beautiful, but somewhat clunky and boring.