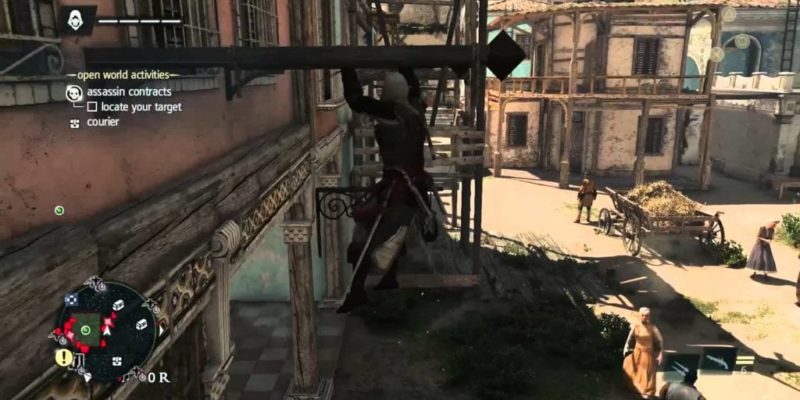 Do you know why Ubisoft’s PC versions are later than the console versions? I think I’ve figured it out. It’s because they spend all their time making bloody trailers.*

Anyway! These seven minutes of gameplay footage open with Edward taking a trip in a diving bell to visit an underground cave where, without his weapons and tools (because diving), he’s forced to use stealth – whistling to call guards over, knocking them out, then stealing their knives and hurling them at their buddies. At least, I say he’s forced to use stealth. Considering that section ends with him getting into open combat, disarming a guard, and then stabbing said guard through the stomach with it, I’m guessing you can still go full-combat on people even without your weapons.

From there it’s onto an inner-city hit, and then a mission in which Edward has to sneak through a jungle and onto a ship to assassinate a particularly naughty chappy.

A few of the new stealth improvements are displayed in the video. For instance: you can now mark people in Eagle Vision so that they remain highlighted even when you switch back to normal vision, which might actually be enough to make pure stealth something other than really annoying. There are also explosive barrels, because this is a videogame.

Assassin’s Creed 4: Black Flag is due out on console on 1 November in the UK and 29 October in the US. The PC version is due out… oh, right, of course. It’s due at an unspecified future date. Silly me. Stealth video below, anyway.

* Okay, in this case it might be because the PC version will be closer to the next-gen consoles than the current-gen ones and so it actually needs the same amount of development time as the Xbox One and PlayStation 4 versions, but shh.