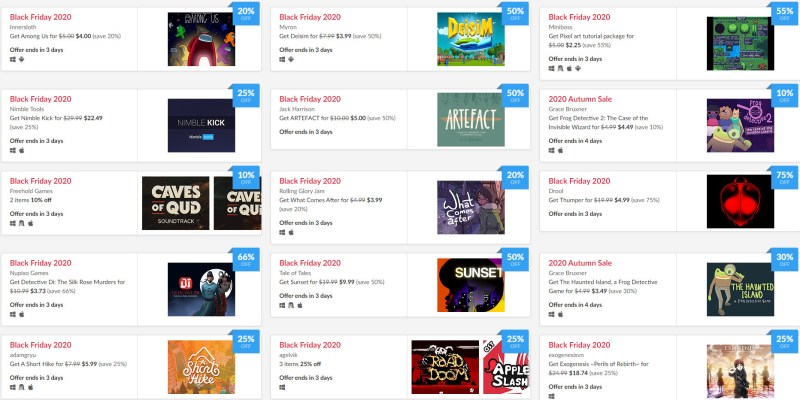 If you like games and the people who make them, today’s your lucky day. The digital indie game storefront Itch.io is hosting a special event today. No, it’s not related to Black Friday; that’s just a coincidence. For all of today, Itch.io is giving every cent of every sale straight to game developers.

While it’s an amazing coincidence that this event lines up with Black Friday, it also means that a host of popular games on the indie storefront are also discounted. Those deals go on for the next three days and include heavy discounts on games like Thumper, Among Us, and A Short Hike. Once again, if there was ever a day to buy indie games, it’s today.

Developers get more than just a slice

Itch.io is already a special site for indie developers, in that it offers those fledgling studios or lone-wolf coders a little bit more flexibility and profitability. Other online game retailers usually mandate a pretty hefty cut of sales — the Epic Games Store takes 15% while Steam takes a whopping 30. However, Itch.io only requires 10% of profits and gives developers the option to adjust that value to more or less. Not that it matters too much right now since 100% of all sales are going straight into developer’s pockets.

It's officially Friday! For the next 24 hours we're giving developers all of our revenue share.

To celebrate the occasion hundreds of developers have already put their projects on sale! https://t.co/rezDf8ZOHc

Retailers that properly support indie games are few and far between, and Itch.io is absolutely one of the best. That being said, it’s not just good for developers but for fans of indie games too. The storefront constantly launches events that offer access to hundreds of games. Itch.io made headlines earlier this year for one such event, the bundle for racial justice and equality, which ended up raising over $8 million USD that was split between the NAACP and the Community Bail Fund. Anyone that donated to that bundle received over 1,000 games which would have cost nearly $10,000 USD.