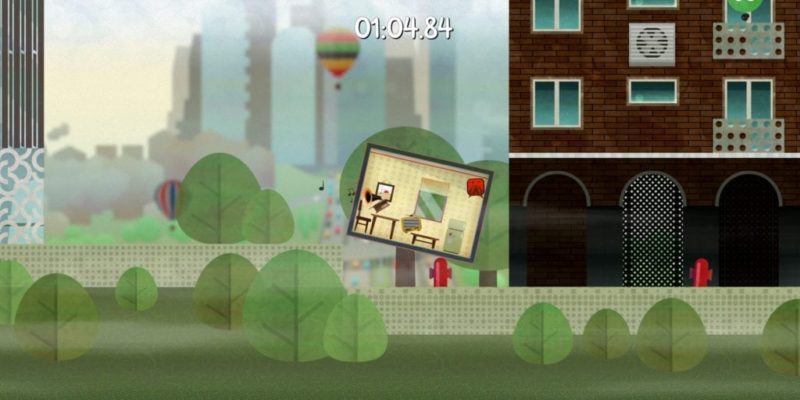 Step out and see the beautiful wonders of the world without leaving the comfort of your modest city apartment in Jim is Moving Out! Coming out July 19, this physics-based puzzle game has players play as a red square with a mustache known as Jim. Your objective is simply to move his apartment through a variety of environments across the globe without destroying the room.

The journey starts in Jim’s hometown city, but players will soon find themselves in many unique locations, including jungles, futuristic cities, cruise ships, and more. Players will have to push, pull, lift, and carefully lower Jim’s apartment through a slew of puzzles and obstacles in order to travel to new destinations.

Each level will have its own unique set of puzzles and challenges to solve. However, the goal will always remain the same: escape without damaging the apartment. A tasteful mix of classical music will also accompany levels to keep the pace up.

Here’s a look at the trailer released by Cinemax Games.

Jim is Moving Out! originally started as a Ludum Dare project by Bohdan Taraba of Handsome Box. The first version was minimalistic, with only necessary details added to make the game playable. There were also only seven levels in its first rendition. Eventually, Taraba decided to pursue the development of a full game version. Thus, Taraba teamed up with publisher Cinemax Games to make his goal into a reality.

Jim is Moving Out! will be playable with a gamepad and/or keyboard and will feature multiplayer functionality, though only up to two people. Single-player and multiplayer gamers will have access to the campaign mode along with the experimental laboratory mode. In this mode, players will need to unlock new stages and game modes by collecting vinyl.

Everything we know about Beyond Skyrim: Roscrea