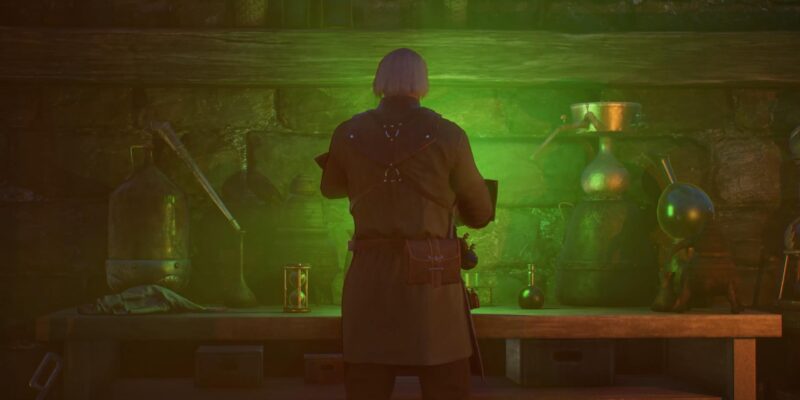 King’s Bounty II has several quests, some of which lead to puzzles. Indeed, there are even cases when you’d select the Finesse ideal only to be presented with tricky moments. Although a majority of these tasks are easy and straightforward, others might have clues that are cryptic or non-existent. Here’s our King’s Bounty II puzzle solutions guide to help you with various runes, pillars, and quests such as Palatinus the Mad Genius, the Abandoned Catacombs, the Witch’s Bridge, Philanthropist and Patron of the Arts in the Mages’ Tower, helping Rick with the Grotto at Windy Port, the Castle Forten riddle for Heinrich’s Inheritance, and more.

Note: For more information, check out our King’s Bounty II guides and features hub. We also have a beginner’s guide to get you started with the basic mechanics and combat system.

King’s Bounty II has a few puzzles involving runes and floor plates. There are floor plates with symbols, and you’ll see clues that tell you which ones you can step on. Think of it as akin to Indiana Jones and the Last Crusade, where you need to step on the correct plates to finish the objective. Here are some examples: 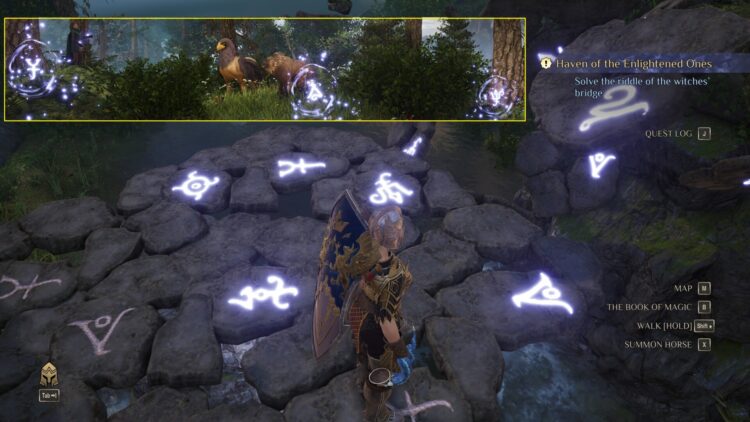 When you meet the Palatinus for the Mad Genius quest in King’s Bounty II, you can either destroy his magical device (Power) or solve the puzzle (Finesse). If you choose the latter, you need to interact with the wall plates that match the runic symbols on the device. Once you’re done with the first part, the next phase has you looking for four symbols outside his house. The ones you’re looking for are: Philanthropist and Patron of the Arts in the Mages’ Tower

This portion of the Philanthropist and Patron of the Arts quest in King’s Bounty II takes you back to the Mages’ Tower to activate runes in the following order: Nun -> Soet -> Nun -> Kor -> Nun -> Dingir. The runes themselves are found as pairs at the three gates at the entrances to the hub. Also, there’s a “Nun” rune in each of these spots. The Grotto and Rick in Windy Port

Later in King’s Bounty II, you’ll reach the town of Windy Port where you’ll find Rick and the Grotto puzzle. To clarify, this is part of two quests: Through the Quarantine and Clash at Windy Port. You can either attack a man named Fisher on your own (Power) or you can ask Rick for help first (Finesse). If you choose the latter, Rick will ask you to go to the Grotto. Here, you’ll see five pillars with plates that have different symbols.

I couldn’t find a note here with a clue, and one of the symbols was a bit confusing since it had a vertical line that looked like a “1” (i.e., the start of the sequence). After some trial-and-error, I realized that the solution was to interact with the pillars in this order:

This reveals a chest that has the Summoner of the Elements trinket. It’s an accessory that boosts elemental damage and is quite useful if you wish to bolster your character’s magical capabilities. Further onward in King’s Bounty II‘s campaign, you’ll reach the town of Rouen where you can help with Heinrich’s Inheritance. The next time you talk to Heinrich, he tells you to go to Castle Forten. There are two puzzles here: The Gargoyles in Beauty and the Beasts

Beauty and the Beasts is a sidequest that you’ll receive once you reach the town of Floster in King’s Bounty II. As you advance further, you’ll find a mages’ hub with a gate that you can break down (Power) and a gargoyle puzzle that you can solve (Finesse). If you want to solve the puzzle, you need to rely on trial-and-error methods.

The idea is to have all gargoyles pushed down. However, interacting with one will also make the adjacent statues move. After defeating the enemy army that appears, you can recruit Chimeras into your army. King’s Bounty II is available via Steam. For more information, check out our guides and features hub.

Fishy physics-based platformer I Am Fish gets its release date