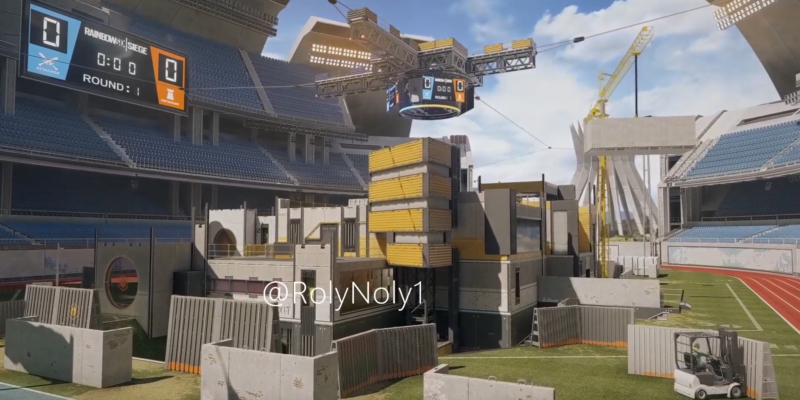 Rainbow Six Siege is entering its fifth year of content, and as always, fans want to know what Ubisoft has planned next for the tactical team-based shooter. Well, as it turns out, we might have some ideas about that. As tradition dictates, as soon as we got fresh new additions like Operation Shifting Tides, die-hard fans started digging up the next wave of content. This has now led to the alleged leak of a new map, dubbed Stadium.

Stadium appears to be cobbled together with pieces of previous maps. It pulls together individual rooms from what looks like the old Hereford Base map as well as the newly reworked Kanal map. The central structure is surrounded by an empty stadium, which fits with the new Capitao footballer elite skin. Several large, unbreakable windows are scattered throughout the map, too, making for a fairly unique feature.

Check it out in the video below, courtesy of Twitter user RolyNoly1, who has a history of posting legitimate leaks.

With the upcoming 2020 Rainbow Six Siege Invitational, it seems likely that Stadium would launch alongside it. That would probably cement it as a limited-time event map, which is hardly a bad thing. Recent in-game events have earned Ubisoft a lot of praise from the community due to their quality. Having another one during or after the Invitational would likely do well. If this theory proves true, we’ll no doubt learn more before or during the Invitational next February.

The map itself is also an interesting idea. Rainbow Six Siege has had a bit of a Rennaisance lately, with the team taking old, unbalanced maps and turning them into great new ones. It makes sense, then, that the next event map could pull together pieces of other maps to build a cohesive, new level.

At present, Ubisoft has not yet confirmed anything regarding the Stadium map. However, the amount of detail in this video – from the map itself to the new costumes showcased for a handful of operators – makes it seem pretty legitimate. For now, let’s all just keep our eyes peeled for any official announcements.

Sennheiser announces Season of Giving promotion for the holidays

By Matthew Loffhagen59 mins ago
News