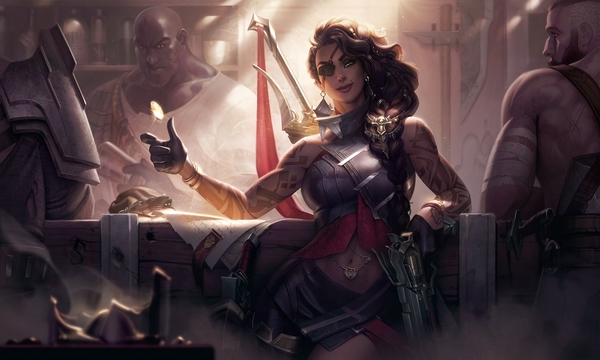 The Desert Rose herself was once a citizen of the harsh deserts of Shurima, before it fell to armed strangers. Angry at her weakness, Samira found solace within the Noxian empire, where she gained power and respect. Her reputation as a flashy daredevil began the stories of wonder, and never ceases to amaze. In League of Legends, Samira is an ADC with the playstyle of an assassin. She’s quick to clean up fights, and is a fantastic duelist against most champions. Her damage output is insanely good as well as her mobility. However, she puts herself in risk to truly display her true potential, making her daredevil moniker true to lore.

Samira flicks a gold coin outwards, taking one gold from her inventory and dealing one true damage. The reason why I’m including this taunt as part of her abilities is the fact that because it does damage, it stacks her passive and her ability to use her ultimate. This is the first time in League of Legends history that a champion can use their taunt as part of their kit.

Each unique basic attack and ability that damages an enemy champion grants Samira a Style stack for six seconds with a max of six stacks. The stack count is represented from E to S. Samira stacks grants her 0% to 21% bonus movement speed depending on your style grade.

Alongside this, Samira has two basic attacks. She shoots a pistol at enemies outside 200 range, while she strikes with her sword within that range. Standard attacks with her sword, as well as her three basic abilities, deal bonus damaging scaling from her bonus AD. This damage is increased based on the target’s missing health.

Additionally, Samira’s basic attacks against immobilized enemies knock up the enemy for 0.5 seconds, resetting her basic attack timer and becomes unstoppable. If Samira is outside her basic attack range, she will dash forward slightly before proccing the knock up. This effect cannot occur on the same target more than once every few seconds.

This passive is ridiculously strong by itself. The range basic attacks allow Samira to potentially work as an ADC, or to poke her opponents down in solo lanes. However, with the missing health damage, it allows her damage to scale towards more of an assassin playstyle were she can clean up and executes enemies as well.

Flair has two actives. If the cursor is beyond 950 range, Samira will fire a bullet that stops on the first enemy hit. If the cursor is in front of Samira, she slashes with her sword in a cone, dealing the same damage to all enemies highlighted.

Casting Flair (Q) during Wild Rush (E) will cause Samira to drop bombs along her path which detonate and causes damage. Flair can critically strike, and it applies life steal.

The damage of this ability scales with 100% of Samira’s AD. This makes her scale well with lethality items and allows a potential build path into an assassin-type role. Its low cooldown and mana cost allows it to be spammed without much punishment in the lane. The base damage is very weak, entirely relying on items to truly deal meaningful damage later on in the game.

Samira slashes around herself with her sword for 1.25 seconds, dealing physical damage to nearby enemies. During the cast, Samira destroys all non-turret projectiles around her.

This is the ability that gives Samira her assassin-like playstyle. The damage is decent, and the massive increase in attack speed gives her much more DPS and stacks her passive easier. The ability reset is just the icing on the cake, allowing Samira a vast amount of mobility. This ability allows Samira to continue chasing down targets after each kill, or even allow her to go in and safely get out with relative ease. It’s flexible, and makes Samira extremely hard to hold down with crowd control.

Samira spins and rapidly shoots everything in a large AOE every 0.2 seconds over the course of two seconds. She slows herself, each shot able to crit while applying life steal.

This ability is ridiculous. Firstly, the ability has relatively no real cooldown. Instead, maxing out your style stacks to S grants Samira the ability to cast Inferno Trigger (R). The damage it deals is very high, and as long as you are damaging something in the middle of her ultimate, it’s very hard to out-damage the healing she gets from life steal alone. Keep in mind, Samira is susceptible to crowd control and can be interrupted during Inferno Trigger. Thankfully, you can cast Wild Rush during your ultimate, and I recommend using it defensively until your opponent’s crowd control has been used. 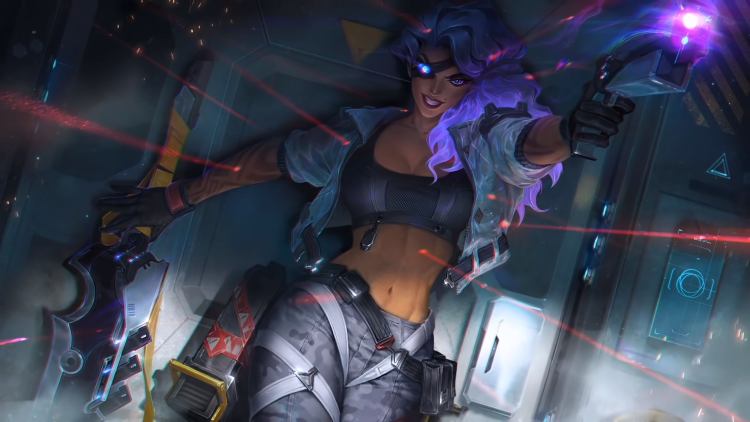 Samira is actually pretty average early on in the game. Her abilities have low base damage and scale hard with items. However, because Flair has a low cooldown, it can be spammed. Keep in mind, the lower the health your target is, the more damage Samira naturally does because of her passive.

Due to this, Samira can poke down enemies decently well and cleans up early fights well. You’re still susceptible to being bursted as Samira is still squishy, and need to make winning trades and fights, because playing from behind is damn hard as Samira.

Mid game is when Samira starts to pick up. With some items under her belt, she can easily finish team fights with high burst and sustain damage. If she’s ahead, she’s near-unstoppable as long as she can get her passive stacks up. Playing with your team as Samira is crucial to do so, as enemy crowd control and the threat of being burst down still can happen. Because of this, I do not recommend split pushing even with her potential to take down towers.

Late game is similar to mid-game. At this point, Samira can assassinate priority targets relatively easily and with no punishment. Getting picks is very beneficial for her skillset. In team fights, Samira can finish and clean up with her ultimate. However, she cannot start them without the risk of being focused. Poke from afar with her Flair and wait for an opportunity to dive in, stacking your passive, and finishing enemies with Inferno Trigger.