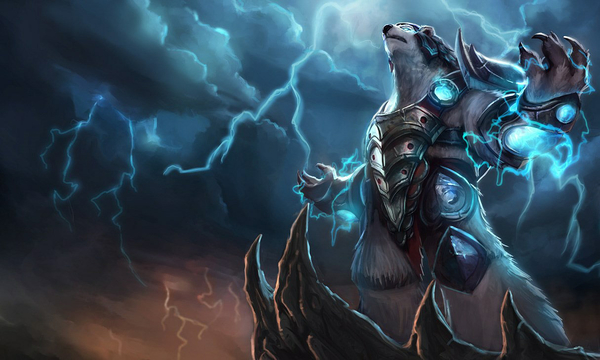 As a demi-god of the Freljord, Volibear is an all-powerful beast, both in lore and in-game in League of Legends. The Thousand-Pierced Bear, the Bear of Storms and Wilds, Volibear is known by many names. As the leader of the Ursine, a warmongering battle thirsty tribe, he is not to be trifled with. In-game, Volibear is an aggressive tanky frontline jungler. His League of Legends kit revolves around early-game snowballing and late-game picks with a decent amount of team-fight capability due to his ultimate and third ability. He’s also simple to pick up and is a very safe pick if you get auto-filled. This guide to using the character as of season 10 will teach you everything you need to know.

Chosen of the Storm (Passive)

When Volibear’s health is below 30% health, he will regen 30% of his maximum health within the next six seconds. This passive has a cooldown of 120 seconds.

This health regeneration is extremely strong in the early game. At this point of the game, there are pretty much no champions that can kill Volibear while in this state without inbuilt grievous wounds and high base damage. This allows Volibear to be extremely aggressive in early invades and tanks without much consequence. The regeneration also allows Volibear to dive towers earlier than most champions.

Keep in mind though that the passive isn’t infallible. Multiple champions can out damage Volibear’s regeneration, and the cooldown of 120 seconds is a heavy factor to take into consideration. You have to make sure that you do not activate your passive on jungle camps, or else you lose one of your biggest advantages early on in the game.

Volibear gets on all fours and gains movement speed. His next basic attack flips a target over him and does bonus damage.

This is Volibear’s main pick ability. The movement speed allows you to charge down targets and force them out of position and into your team. You want to generally aim for carries that get caught out, mages or ADCs as a priority. It also resets Volibear’s basic attack timer, so you can stack your Frenzy (W) faster by canceling your basic attack animations. The movement speed makes it a good ganking tool as well.

Though keep in mind that this is just movement speed. It’s not a dash or a blink, so you can be susceptible to being kited and slowed.

Passively, Frenzy (W) grants Volibear’s basic attacks bonus attack speed for four seconds, stacking up to a maximum of three stacks. At the third stack, Volibear can actively cast Frenzy, in which he will bite an enemy dealing physical damage based on the target’s missing help.

This ability is his main damage source in League of Legends. The burst it provides is extremely underrated and can be cast in the middle of your basic attack chains. Even while building full tank, the damage is very strong, especially towards squishy targets.

Volibear roars, dealing magic damage to all nearby enemies and slightly knocking them back and slowing them for three seconds. Minions and jungle camps are feared instead. Enemies who are dashing or are in the air are interrupted and take an additional 8% of their maximum health as magic damage.

Majestic Roar (E) is a decent ability. It’s a good farming tool as it can crowd-control jungle camps to avoid getting damaged. The bonus damage from after you flip a target is also a nice addition. Keep in mind that this is the only form of crowd control outside of your Rolling Thunder, chaining the slow very well into the rest of his kit. This makes running from Volibear very difficult to immobile champions in League of Legends.

Volibear releases chain lightning around himself, dealing magic damage and striking up to eight nearby enemies. For 12 seconds afterwards, Volibear’s basic attacks are empowered with lightning and will constantly deal bonus magic damage on hit, bouncing up to seven nearby enemies. Thunder Claws (R) makes Volibear’s natural burst even more deadly, and the bouncing damage is pretty potent in team fights. 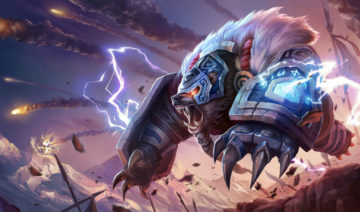 Volibear shines the most at this stage of the game. He’s hard to kill, has high base damage, and can 1v1 most champions as long as his passive is up. He clears areas pretty quick, and his ganks are extremely potent; the flip is one of the strongest displacement tools in the game. This allows him to snowball easily and become a threat.

I cannot stress how important his passive is in early-game scuffles. Always keep it in mind when you early-dive towers, invade, or gank.

Volibear should stay with his team, secure objectives, and find picks mid-game. He’s good at chasing down targets and putting them out of position. He can take towers pretty fast due to his Frenzy, which is also very good for taking Dragons. Force good fights, keep snowballing, and get picks.

Volibear should focus on being a front line. His damage, while high, is not going to be as strong as that of an actual damaging carry. Focus on good engages with his Rolling Thunder; get good picks from the enemy back line that are vital to their team. At this stage of the game, you just need to soak damage, and the items Volibear builds as well as his passive and natural tank are potent.