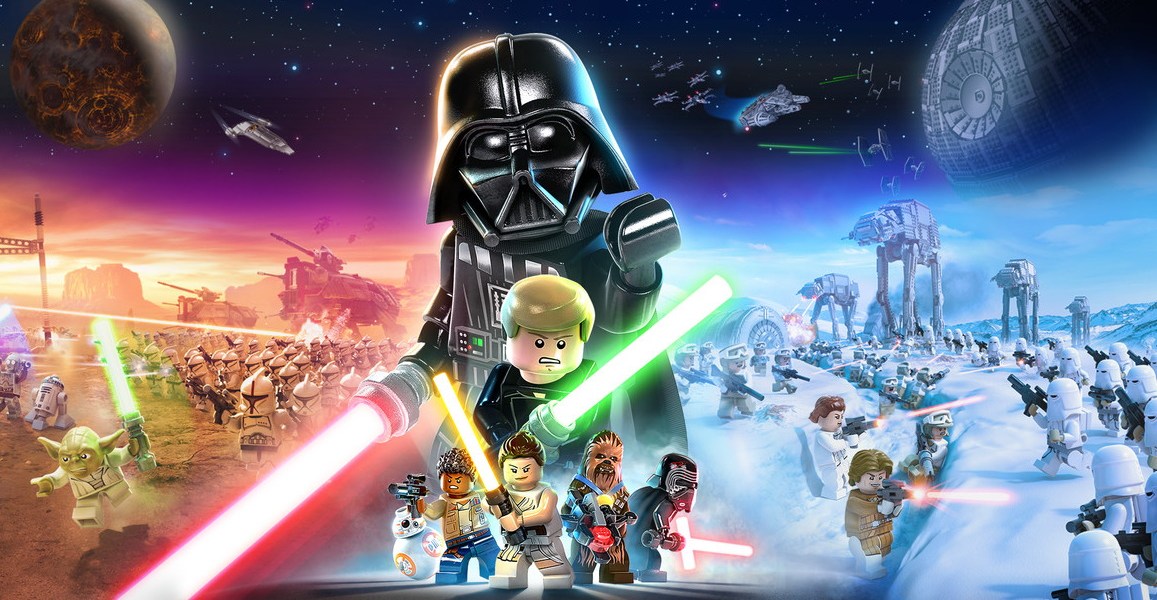 Lego Star Wars: The Skywalker Saga seems like a strange game to announce. The series already had games that placed both the prequel and original trilogies into a series of levels, allowing fans to relive them through the filter of plastic bricks. Afterward, there was even a solo game based around The Force Awakens. TT Games didn’t follow up with the other two films, which angered or disappointed quite a few fans. It’s a little weird to see two of the three trilogies get yet another Lego game. But The Skywalker Saga does things differently enough and, more importantly, well enough that it’s a worthwhile experience for Star Wars fans and for anyone who just likes collectathons.

Obviously, all nine main Star Wars movies are on display in The Skywalker Saga. As far as story goes, this means that, if you don’t like any of these movies, you’re still not going to necessarily enjoy the story presentation here. Beat by beat, all the movies are respectfully showcased in the collection. However, they don’t all share equal time due to the nature of the game’s sandbox focus. For instance, Return of the Jedi is the shortest episode with only one new planet.

I went through the original trilogy levels first and had a enjoyable time for the most part. But, like the films themselves, other levels weren’t as much fun. No matter how entertaining the game’s cutscenes are, Jar Jar Binks is just as annoying as he ever was. Additionally, the story beats in movies like The Last Jedi and The Rise of Skywalker are obviously not going to be saved. And that’s despite the fact that I managed to chuckle along to the once-serious scenes from the films that had me rolling my eyes before. 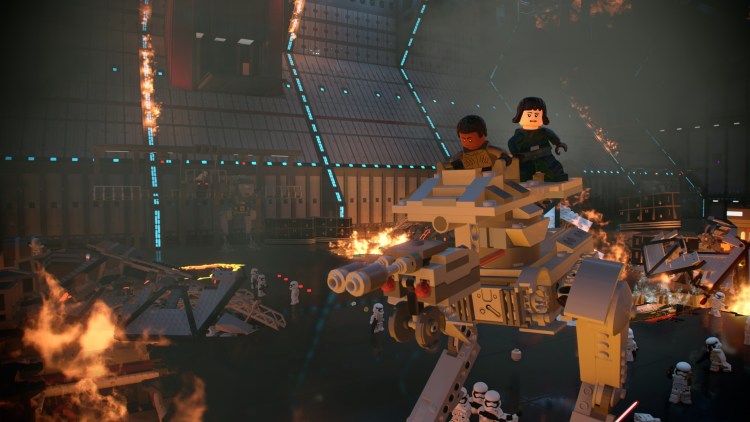 All nine movies that inspired Lego Star Wars: The Skywalker Saga are represented here by about five levels each. These levels, while typically very entertaining, are far from long. If you play through as fast as you can, you could essentially beat this game in under 20 hours with ease. However, TT Games has done something more interesting than just focus on retelling the movies. Instead, as you play through the storylines, you’ll unlock new worlds. Each world represents a unique sandbox that’s packed with bricks to collect, new characters to find, and more ships you’ll be able to control.

Anyone who actually goes through all of the sandboxes and explores them thoroughly will easily see the amount of time they spend in-game to balloon dramatically. It may only take a couple of hours or less to go through the story for The Empire Strikes Back. But fully completing the levels and the sandboxes will easily take more than triple that. There is a massive amount of content on offer. 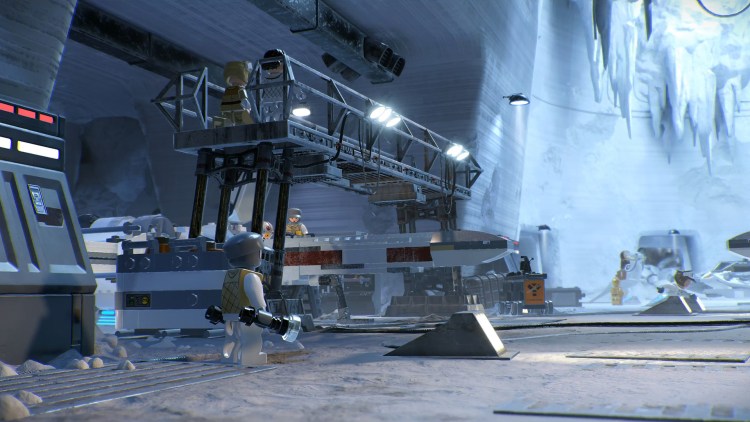 It’s to the game’s credit that various aspects of the gameplay have been notably tweaked over prior iterations. The Skywalker Saga isn’t overly complicated by comparison, but it’s more engaging in terms of combat. Characters now have multi-hit combos that can be strung together in different ways. Regular attack strings, launchers, and unique attacks are all at your disposal. Enemies will start blocking you if you spam a single attack too, so it’s necessary to mix things up a little. There’s even an attack counter, although enemies don’t give you the opportunity to use it as much as I wished.

Melee attacks, as always, very based on what character you use. Characters in The Skywalker Saga are all divided between classes and have different kinds of movesets. All characters have a melee attack, and even astromech droids like R2D2 can smack foes around.

There are a lot more character classes than needed, to be honest, especially since many of them aren’t that different. You’ve got obvious ones like the Jedi, but they’re also broken into heroes, villains, scoundrels, bounty hunters, and droids. Different characters also have varying abilities you can use to solve puzzles and open containers in the sandboxes, which can give you a reason to return to prior areas.

Another great new feature is the fact that characters can actually aim weapons now, which makes the game feel like a proper third-person shooter at times. Not all characters have ranged attacks, though, although some melee-focused characters do have their own twist on them. Jedi, for instance, can throw their lightsabers very easily. All of this doesn’t necessarily make for a deep game, but it definitely adds a lot more flavor and options. There are even boss battles where the camera and controls change up a bit while fighting specific enemies. 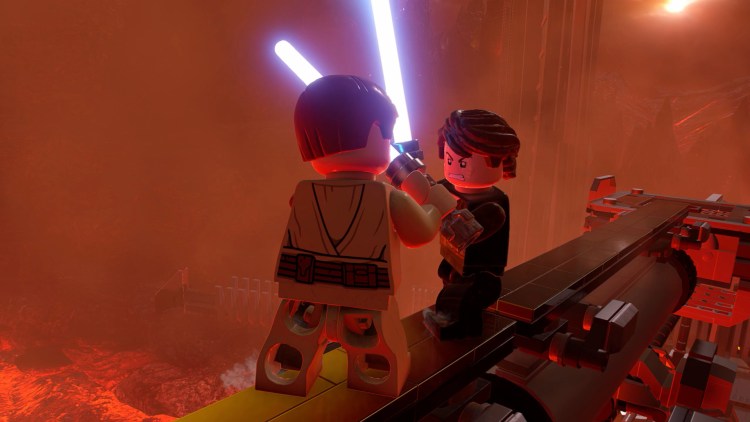 Of course, there are many vehicle sequences which let you pilot classic Star Wars ships and other famous vehicles. Not only will you often be controlling these in the game’s levels modeled after sequences from the movies, but you can also take them out into regions of space connected to each of the game’s main planets. There isn’t much to do in each of these areas, but there are often a few things worth discovering.

The real focus of Lego Star Wars: The Skywalker Saga, though, is on the unlocks. You can gather characters and unlock their abilities (as well as acquire new ships), and then return to the sandboxes to collect more and more bricks to level up all of the classes. There’s also a Free Roam mode where you can take whoever you want wherever you want, which really makes the game and the Star Wars universe come together as a whole.

As far as PC performance, the game teeters somewhat. I’ve experienced a crash, and some of the sandboxes absolutely tank the framerate. For instance, The Skywalker Saga typically runs at about a 100 fps for me, but drops to the 30s in the Ewok Village sandbox. Some missions also include some annoying bugs. The Endor the Line level, which is Return of the Jedi‘s speeder section, is annoyingly difficult if you don’t turn aim assist on. If you don’t complete the level quickly enough, new terrain will stop being generated and you’ll die repeatedly in a void until you exit. You don’t save your progress. Lego Star Wars: The Skywalker Saga can be quite annoying when you’re playing through the storyline of a movie you really don’t like, but the presentation, gameplay, and level design are all so enjoyable that even the most ardent detractors of whichever trilogy you think is worse can still find plenty to enjoy. This isn’t just another really good Lego game, but one of the best Star Wars games we’ve ever seen.

Packed with content and fun gameplay, Lego Star Wars: The Skywalker Saga has something to offer most fans of the long-running sci-fi franchise.

By Jason Rodriguez46 mins ago
Reviews