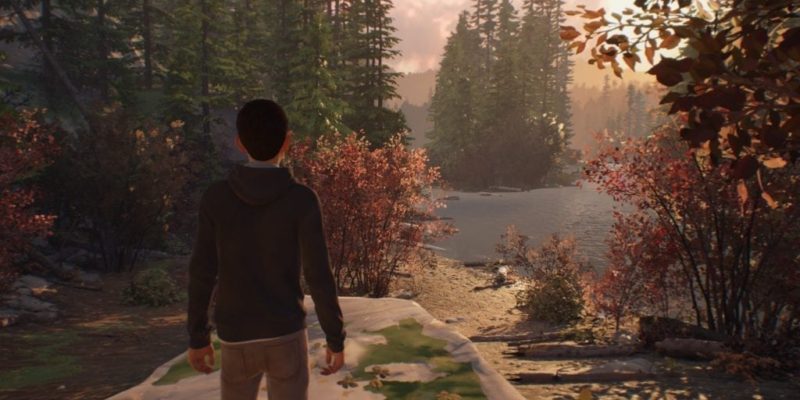 For the unfamiliar, Life Is Strange 2 is the next installment in the episodic, narrative-based franchise by Dontnod Studios. Contrary to the number in the title, Life Is Strange 2 is not a direct sequel to the original game. This game features a brand new setting and cast of characters, making it a great point for new players to jump into the Life Is Strange story. Speaking of story, I will attempt to keep this review as spoiler-free as possible.

With that out of the way, let’s look at some settings! 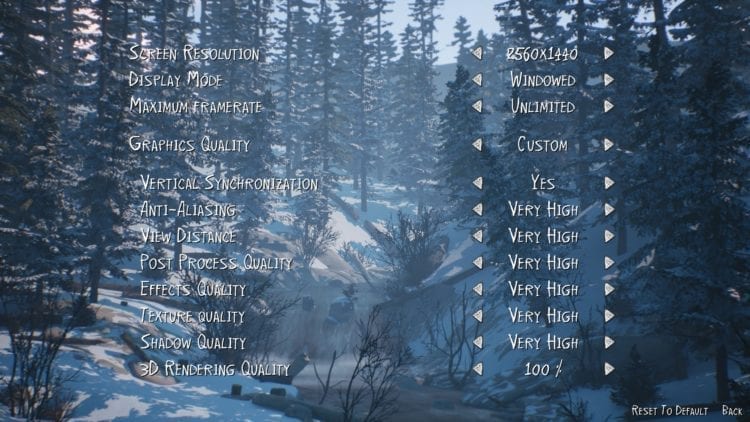 Life Is Strange 2 exhibits a fairly standard settings bundle for a game built in Unreal Engine 4. All the sliders you expect to be there are present, including the ability to remove any licensed music from the game audio, which is nice if you plan to upload to YouTube or Twitch. You can rebind almost every key as well, except for a select few.

Personally, I played with an Xbox 360 controller and encountered no issues. My only complaint, as far as settings go, would be a lack of colorblind mode. I did not encounter any color-based puzzles, but I’m sure the option would be appreciated.

The Light Through The Trees

Life Is Strange 2 sports some noticeable graphical improvements over its predecessor. Environmental lighting seems to have improved across the board, especially outdoors. I actually took time to appreciate the world during my time with the game. There are benches scattered throughout the episode that present you with a nice vista. I took the time to visit every bench that I found to take everything in.

Character models have also improved, although they still remain a weaker point of this series. Animations, specifically while characters were speaking, have also been refined. I did notice that Daniel’s hair would flow with the wind very slightly, which I do not remember happening in the first Life Is Strange.

Life Is Strange 2 pulls off these graphical improvements without making itself impossible to run on budget hardware. I played through the episode on a two-generation old GTX 970, and I was still able to play on the “Very High” preset. At 1440p I would sometimes experience dips below 60 frames per second, but at 1080p this game ran like a dream. 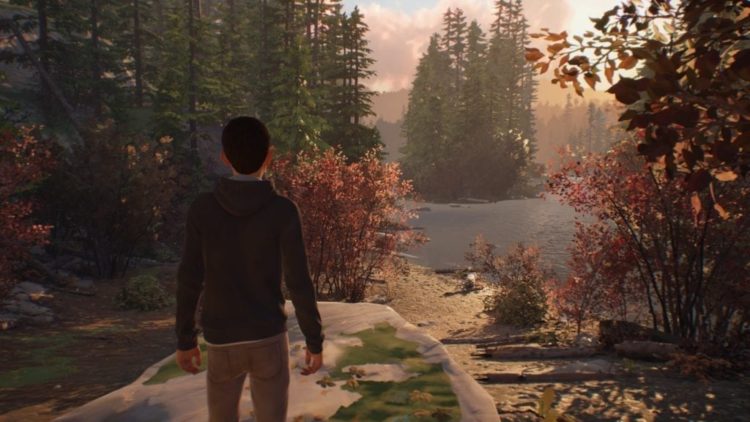 Unlike its predecessors, Life Is Strange 2 does not take place in Arcadia Bay. Instead, we are transported to Seattle, where we meet our two new protagonists. We play as brothers Sean and Daniel Diaz, age 16 and 9 respectively. The dynamics between these two brothers is where one of the new mechanics lies.

Daniel, like most nine- (almost ten!) year-olds, is very impressionable. He looks up to and depends on his older brother Sean. Your choices as Sean will affect Daniel directly, even if it doesn’t seem obvious at first. For example, if Sean decides to solve all his conflicts with violence, this behavior will rub off on Daniel and change the latter’s decisions down the road in potentially unforeseen ways. Finally, a game with all the joys of messing up a child for life! 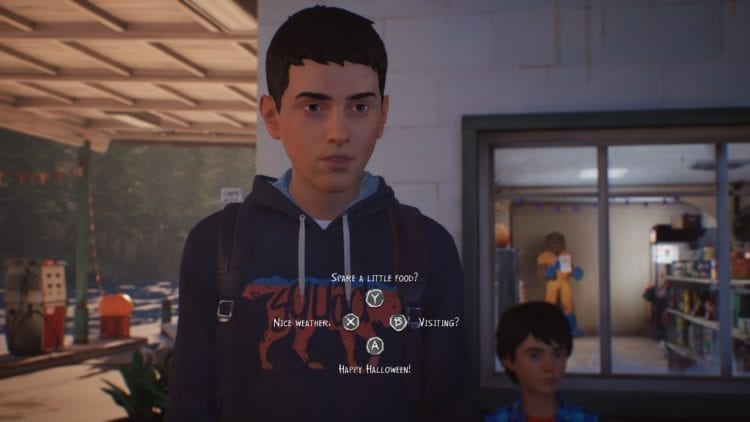 Every decision you make is under a microscope. No pressure!

Previous installments in the series have taken place mostly in or around a school, but Life Is Strange 2 breaks this mold right out of the gate. Without going into too much detail, Sean and Daniel end up spending most of their time in the wilderness of Washington State. Judging by the trajectory of this first episode, I have a feeling our protagonists will rarely be blessed with the comforts of home. This is a welcome change in my opinion, and it allows the developer to explore a large variety of locales in future episodes.

No Longer A Time Lord

Speaking of changes, time manipulation seems to be missing from Life Is Strange 2. There are still some supernatural abilities present in the game, but for the sake of avoiding spoilers, I’m not going to go into too much detail. I will say that during what I played, at no point was I able to use any abilities to change or alter my decision making. Be warned: outside of reloading your save file, you will not be able to undo any decisions you make.

I’m surprisingly in favor of this change. The time manipulation in the original Life Is Strange made some of your choices feel hollow. If you didn’t like the result of your actions, you could just rewind and try again. Sometimes the game would prevent you from rewinding time for especially impactful choices, but it was never really explained why this would happen in the lore. I’m glad this was removed, and I support Dontnod’s decision to focus on the dynamic between the brothers instead. 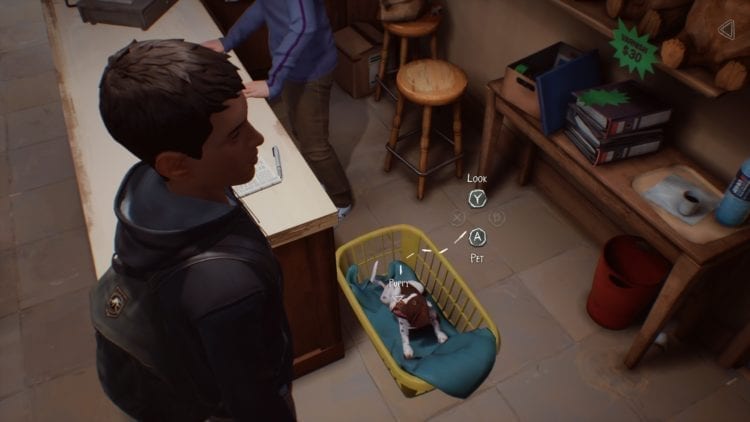 Dog petting is the most important feature, obviously.

The Pen Is Mightier Than The… Lens?

Max’s Polaroid camera, which was used to complete optional objectives and achievements that rewarded exploration, has also been removed. This has been replaced by Daniel’s Sketchbook. Normally this wouldn’t be a big deal, but the process behind this mechanic has also been changed.

Previously, one would simply walk up to a point of interest and press a button to snap a picture. In Life Is Strange 2, the situation is a bit more involved. First, you must find a place for Daniel to sit down and whip out his sketchbook. Once you’ve accomplished that, you’re presented with a first person view from Daniel’s perspective. From here you must move your view to the foreground or background of your viewpoint and hold the A button to “observe” it. Only then can Daniel put pen to paper and begin drawing, which the player commands by moving the left thumb-stick.

However, this will only get you a rough sketch of whichever element of the environment you focused on. In order to fully flesh out the picture, you must repeat this entire process twice for each element. Frankly, this feels tedious for what basically amounts to an achievement. If Daniel’s drawing process was animated, it would be much more engaging. Sadly, the lines just appear in his sketchbook while you impatiently wiggle your analog stick from left to right, making this feel more like a chore than a cool reward. This isn’t a huge gripe in the grand scheme of things, but I felt it was worth mentioning. 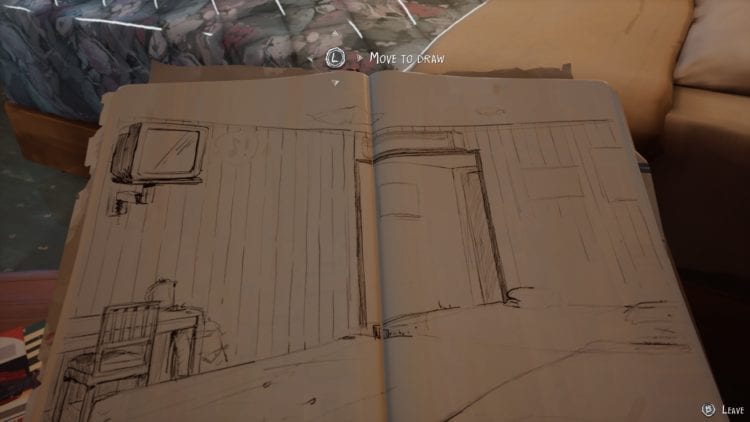 Not quite the Bob Ross Simulator we all want deep in our hearts.

The World Around Us

The Life Is Strange franchise has always excelled in its writing and in capturing how actual young adults carry themselves. Life Is Strange 2 feels no different. The dialogue between the teenage characters is quippy and believable, right down to the excessive use of words like “douchebag.”

A lot of the wit in this game is off the beaten path. Life Is Strange 2 encourages exploration in not only the in-game world but also through the player’s inventory and cell phone. There are seemingly endless amounts of item descriptions, text messages, and sketchbook drawings to find. These little details help flesh out the characters and the world they inhabit. 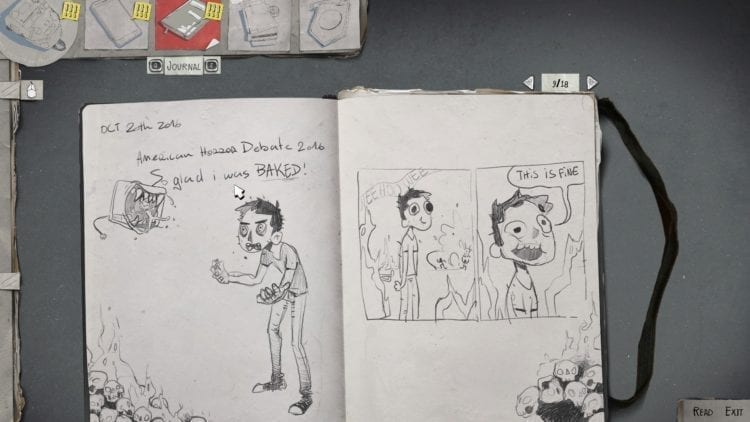 However, there is one fatal flaw. Sean and his best friend Lyla regularly communicate through Skype, constantly reminding each other to “Skype me!” While this makes me nostalgic for the days of AIM, there’s a problem: nobody under the age of 25 uses Skype to talk to their friends, ever.

To prove this, I asked an actual teenager what they thought of Skype. The answer I got was less than enthusiastic. I’m not sure what inspired Dontnod to choose Skype; surely they’re not that out of touch with this very important element of teenage life. I’m assuming money is involved somehow since Minecraft, another Microsoft-owned product, was also mentioned prominently. This is truly the definition of nitpicking, but it gave me a chuckle nonetheless. 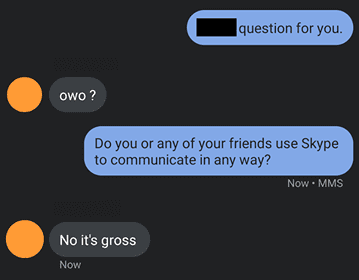 You know it’s a real teenager because they responded with a meme.

The End Is The Beginning

I rather enjoyed my time with Life Is Strange 2 Episode 1, even with my dislike of some mechanics. Characters like Lyla are believable and are backed up by well-written dialogue. The dynamic between Sean and Daniel is especially interesting. I can’t wait to see how Daniel will change throughout the remaining episodes based on my decisions.

The story picks up quickly and doesn’t linger in any one locale for too long, which helps keep it fresh. Speaking of fresh, I appreciate that Life Is Strange 2 is breaking away from the setting and characters of the previous games. This is a move that not every game developer is willing to take. Sometimes games suffer from stagnation, so I applaud Dontnod for making this jump.

Life Is Strange 2 seems well built on the technical end of things and is generally a good looking game. There are noticeable improvements in lighting and general graphical fidelity without restricting the game to top-tier hardware. The character models could be better, but they are still improved over the previous game.

Overall, it’s hard for me to find a reason to not recommend this game. Returning fans of the series will find the new direction of Life Is Strange 2 refreshing, but not unfamiliar. This is also a great jump on point for fans of the genre who may have missed other entries in the Life Is Strange series. Personally, I’m looking forward to future episodes.

Returning fans of Life Is Strange will find this sequel refreshing, but not unfamiliar. With its brand new setting and story, Life Is Strange 2 is also a great point of entry for any new players. As a fan of the series, I'm excited to follow the Diaz brothers on their new adventure.