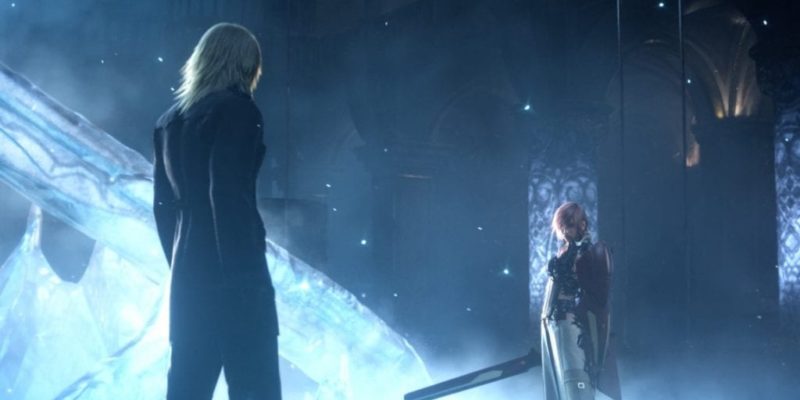 I felt I had to say that right at the start, because if I didn’t open with that I’m not sure I’d believe it myself. Lightning Returns: Final Fantasy XIII has a good PC port.

Alright, so. 20GB download, or thereabouts, which isn’t too bad. Let’s fire it up after downloading, and have a look at the options in the inevitable launcher. 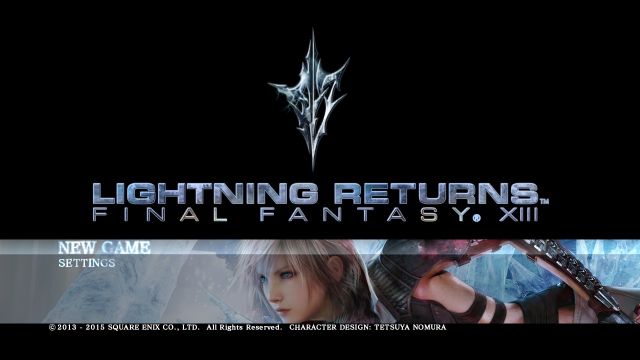 In a surprise twist, the graphic settings are actually in a standard Windows drop-down menu at the top of the window – and they’ll appear there in fullscreen, too, if you move the mouse to the top of the screen. It’s incredibly unorthodox, but it means you can adjust the settings in-game, on the fly, without having to either go into a specific options menu within the game itself and without having to restart.

These drop-down menus also include “Reboot”, in case you need to instantly restart the program (which you might; we’ll get to that), Exit, and the ability to choose control type A or B. I have no idea what the latter really does. It changes the key-bindings, or something, but I’m not sure in what way. 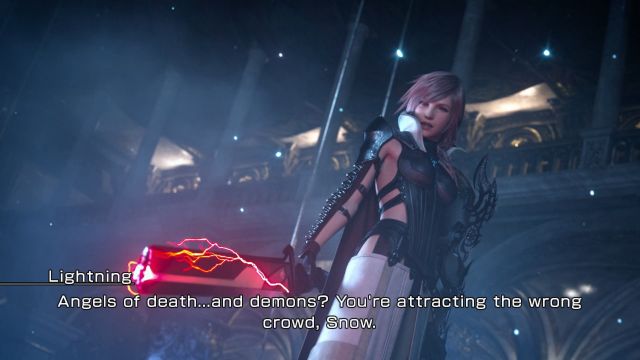 The cutscenes are as pretty as ever, obviously.

Not the most amazing list of tweakables in the world (and people with 4K monitors are, again, going to be unhappy) but there are a few lovely bits in there. The Fixed / Dynamic framerate can more accurately be described as “30FPS / 60FPS”, for instance. Some of them make the game look nicer, while some of them are pretty much down to your personal tastes. I prefer Color Correction to be off (well, I mean set to Standard) but Shadowing, Lighting, and Texture Filtering are all on Advanced. Oh, and that “Fullscreen” option is actually Borderless Windowed, which I’m super-happy about because that’s my favourite type of fullscreen.

As a couple of quick examples… 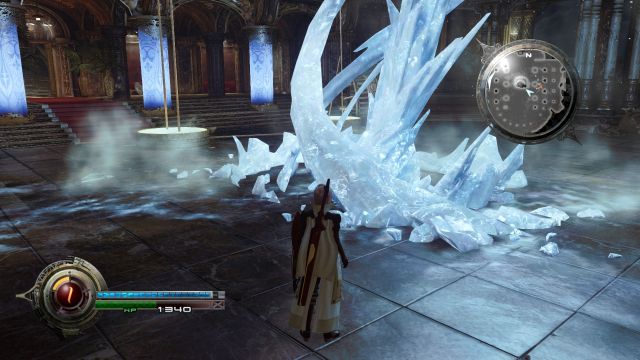 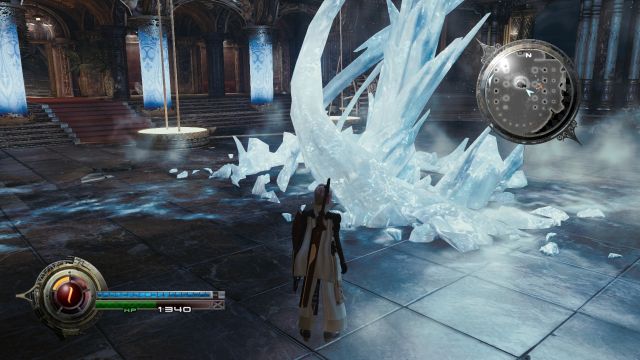 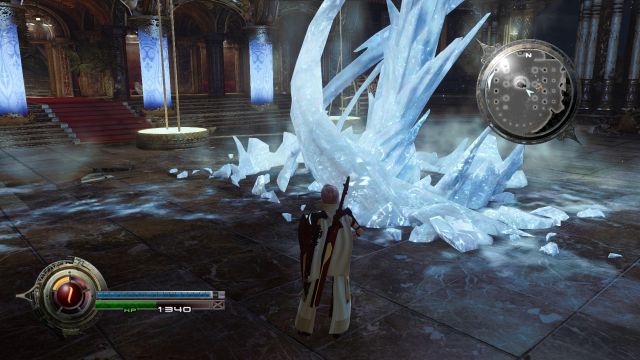 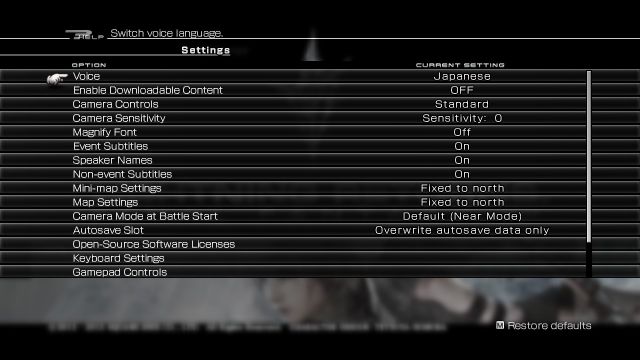 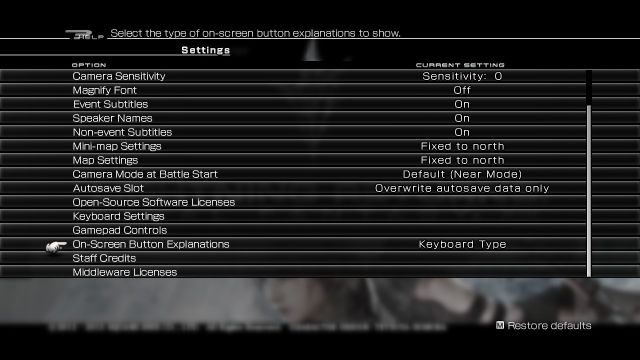 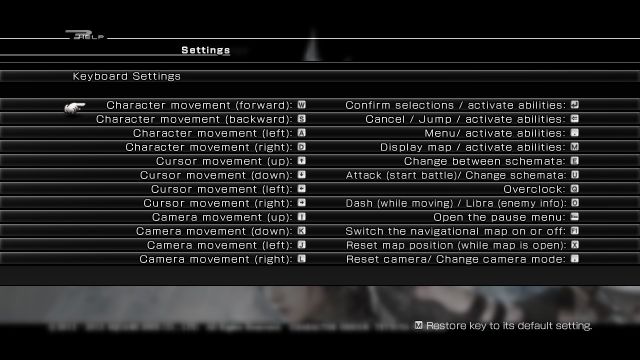 Changing the voices from Japanese to English or vice-versa and enabling/disabling the DLC require you to restart the game, which is why that Reboot option is actually quite nice to have. That aside, you’ve got standard quality-of-life stuff like subtitles, mini-map settings, camera settings, and whether you want the game to display keyboard or controller button prompts.

The Gamepad Controls sub-menu only really seems to show the controls rather than letting you change them, by the way, but that Control Type drop-down menu thing might change that. Again: I don’t know, because I don’t have a working 360 controller. I do now have a working Steam Controller, but in the case of Lightning Returns: Final Fantasy XIII, I set that up to act as a mix between gamepad and keyboard controls. I’m going to take a massive punt and say that the gamepad controls are pretty much fine, though, because that’s how I set up my Steam Controller. 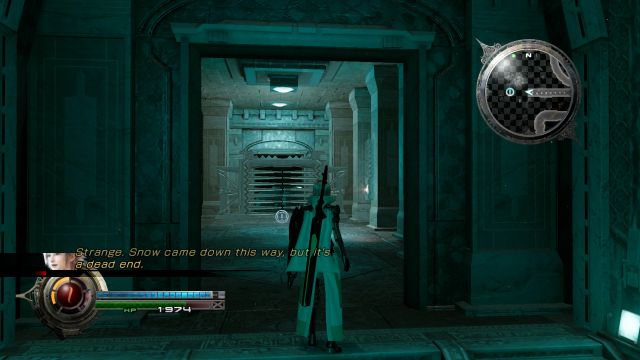 I wonder if that massive glowing switch on the wall could have anything to do with it.

The keyboard controls aren’t exactly fine, but they’re not as terrible as you might expect. I went through the game’s tutorial area using them, and while there doesn’t seem to be any way to bind the camera controls to the mouse (presumably because you need it to activate the drop-down menus for graphics and whatnot) the camera didn’t seem massively important. In the early areas at least the auto-tracking isn’t too bad, and it doesn’t really have any impact in battles. For the little bits when I did need to rotate the camera, using IJKL wasn’t too much of a nightmare. I would absolutely rebind the battle controls away from M, Period, and Backspace, though, with Comma acting as a toggle for the camera distance.

I don’t know whether I’d recommend the game without a controller, but… well, it seemed playable. I’m not sure how much of a hassle hard, fast-paced battles later in the game would be with it, but the early stages didn’t really frustrate me much. Bizarre, I know.

My play session ended with me being murdered by a ludicrously powerful dragon that I was barely scratching. I got it down to about 30% health, though, which tends to imply that skill actually matters more than stats!

But there are, of course, two burning questions in your mind. The first is inevitably “Does the Escape key instantly quit you back to Windows?” to which I answer “No, it just opens up the pause menu, like in every other game on the planet.”

The second is “Is the framerate as staggeringly awful – for no apparent reason – as it was in Final Fantasy XIII-2?” to which I answer “No, it actually ran at a constant 60FPS, had extremely quick loading times, and considering it’s an Xbox 360/PS3 game from nearly two years ago, it looks pretty lovely too. Although the cutscenes are in 30FPS, so I suppose you can complain about that if you want to.” 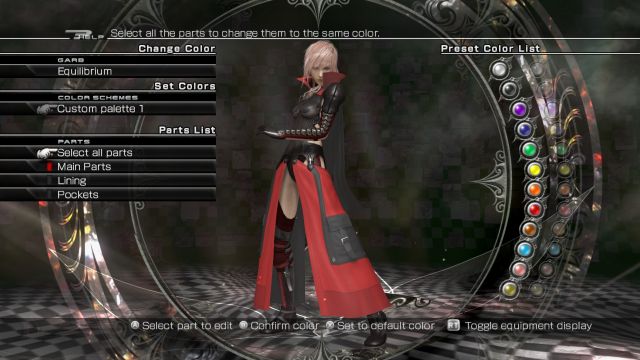 You can also customise the look of every piece of armour you get, which probably makes this an instant-buy for some of you.

Actually, there is stuff you can complain about. Apparently, this game requires cloud saves to be on and requires you to be connected to the internet to simply start it up, which has already led to huge shouting matches on the Steam forums. I can’t say I’m too fussed (I mean, Christ, that’s nothing compared to the usual Final Fantasy problems) but if you were planning on taking your laptop and your controller and a pair of headphones onto a train or something, this isn’t really the game for you. And, y’know, there’s the “no mouse camera control” thing.

Oh, and also… uh. Hm. Well, I did have to change the prompts from Keyboard to Controller both on the main menu and in the game to make them stick, and… good grief. I think that’s about it. Lightning Returns: Final Fantasy XIII has a good PC port.

It it flawless, or completely re-built from the ground up for the PC? No. But, eerily, I’d say it’s one of the best Japanese console-to-PC ports I’ve seen in a long while. It ran at a constant 60FPS throughout, it looked pretty good, it let me change graphics on the fly (within the game itself rather than on a pause menu, so I could instantly see any changes), it supports keyboard or controller prompts, and it didn’t make me want to twist my fingers off when playing it on the keyboard. I’d totally recommend a controller, but it wasn’t exactly a Toukiden: Kiwami. And yes, the always-online and aspect ratio stuff is going to piss some people off, but it’s a Final Fantasy game on PC. The fact that it’s this good is some sort of Christmas miracle. 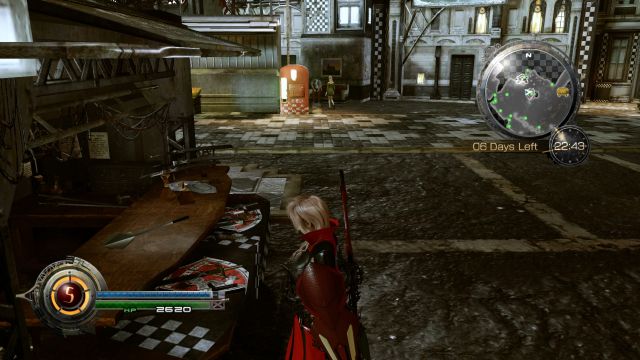 Sometimes the textures and lighting are a little iffy, but for the most part, it looks really rather nice.

Bizarrely, the game itself also seems pretty fun, based on the first two hours. Rather than the typical linear railroading of most recent Final Fantasy games, this one takes a Majora’s Mask/Valkyrie Profile approach to things: the world ends in 13 days, and Lightning has to use that time to save as many people’s souls as possible so that God can take them through to the next world. And yes, time proceeds in… well, not in real-time, but it proceeds as you play rather than via story events. Running from battle, sleeping at an inn, travelling on a train etc. all take up some of your valuable time, and there are a lot of time-sensitive side-quests throughout. It’s a rather unique take on the usual.

The combat seems pretty fun, too, managing to go roughly halfway between a hack-and-slash game and Final Fantasy XIII‘s weird system. You control Lightning directly in battle, and need to manually block and use your attacks, but you still have an ATB gauge. When it’s at full you can unleash hell, but when it’s low you can’t really do much at all. Fortunately, you can swap between three pre-defined sets of equipment and skills (defined by you, that is) on the fly, each of which have their own ATB gauges.

Use your magic-boosting set of gear and skills to unleash elemental death, then switch over to the physical combat set as enemies get closer, and then maybe shift over to a more defensive set and block your way through their attacks while the other two gauges recharge. It’s fun, and the need to time blocks and attacks carefully to make the most out of battles adds a little something to it. It’s no Dark Souls or anything, but time a block perfectly and you’ll Stagger a foe, letting you inflict extra damage while they’re stunned… etc. 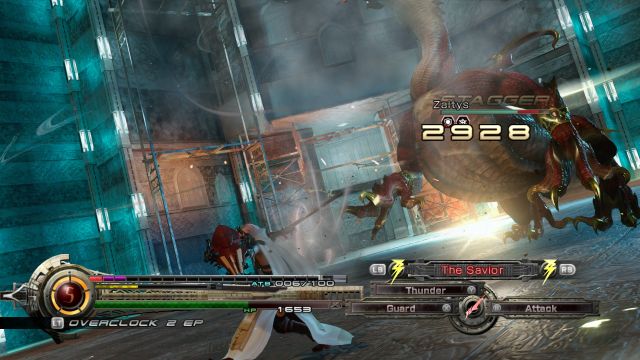 Staggering difficult foes is pretty crucial to success, from the looks of things.

I haven’t actually played Lightning Returns: Final Fantasy XIII before, but from what I’ve played so far… um, I actually might continue. And I mean continue on PC. Final Fantasy Type-0 HD wasn’t a terrible port, some bizarre framerate stuff and dreadful keyboard controls aside, but this actually works really well on the PC, and its unique setting and mechanics have my interest piqued. If you were thinking of picking this up but were put off by every other Final Fantasy game being a bit of a mess on PC, I actually don’t think you need to worry.

Does this mean good things for next week’s port of Final Fantasy VI? I doubt it, as that’s coming from the iOS, but… maybe, just maybe, if we believe hard enough…