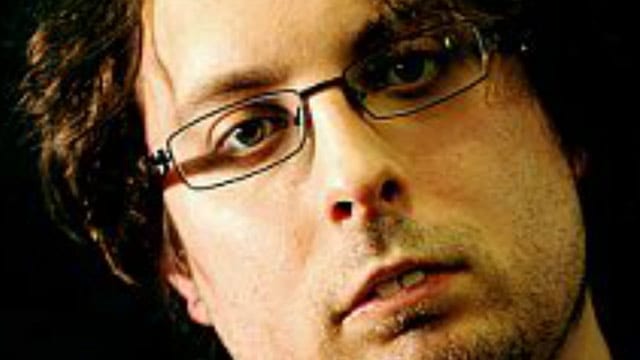 This is a tough news story for me to write as I have worked with Hugh in the past and we’re quite shocked by this sudden news. Hugh Hancock, the founding father of Machinima and subsequently Strange Company has unexpectedly passed away.

Many of you may not know Hugh’s name but he has been working in this industry since the mid-nineties when he pioneered the Quake movie scene and coined the term Machinima. He traveled the world giving in-depth talks on the machinima scene and the process of creating machinima. Hugh founded what was to become the Machinima network but sold it in 2006 to focus on larger projects that would push the boundaries of filmmaking in games.

In recent years Hugh moved into game development and created the excellent Dark Souls inspired VR title Left-Hand Path which has received a lot of praise on Steam and made it onto our Best VR Games List.

Hugh passed away suddenly from a heart attack today.

Back in 1997, Hugh approached me to talk about creating a movie using the Quake engine. At the time we thought he was a little mad but agreed to offer our services. At the time I owned what was the world’s first video game cafe in Edinburgh (Reality-X) so we had access to 20 PCs on a network. His vision was right up our street and our customers were eager to help.

For the next few weeks, Hugh and his team would come in and direct what was to be his first movie Eschaton (see his movies list). This would involve ‘actors’ taking control of a character on each PC to create the scenes. Some of those ‘actors’ included our customers and I have fond memories of Hugh shouting across the room telling the ‘actors’ to stop throwing grenades while he was trying to set scenes. I am sure that drove him mad.

Eschaton was an ambitious project but Hugh managed to pull it off back in a time where PC technology wasn’t exactly stellar. Nothing phased Hugh, he was always up for a challenge and wanted to push boundaries.

Hugh was also a massive part of the early UK Quake scene in the mid-nineties running his site News from the Front. He would help organise the UKCL (United Kingdom Clan League) and would regularly update with the latest Quake scene news. You could say he was involved with eSports before eSports even became a thing.

Hugh was a good friend while I lived in Edinburgh running the cafe and helped us with our game launch events too. Below is a picture of Hugh at the Half-Life launch dressed as the G-Man. Hugh always entered into the spirit of things and was passionate about the games industry.

We are deeply saddened by the news here and it’s a real loss to the industry. Hugh Hancock, you will be missed. 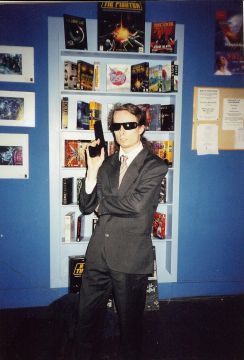 Hugh always entered into the spirit of things. Here he is as the Half-Life G-Man at the Half Life launch event.