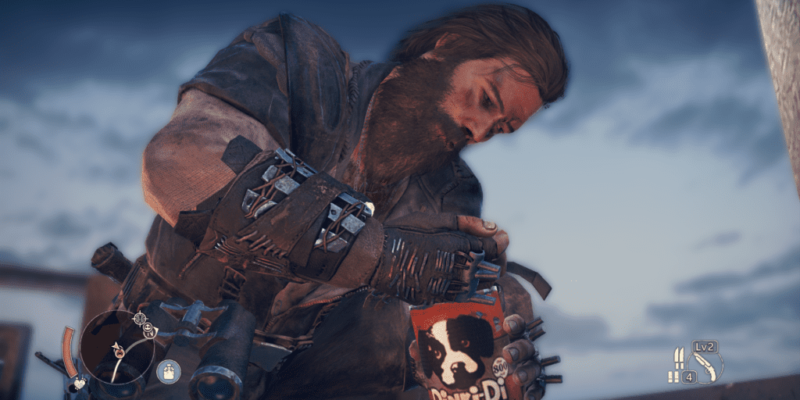 Mad Max is an intriguing game to review, and a tough one to succinctly assess. It captures the atmosphere of its source material very well, presenting an open world of majestic dunes and industrial wreckage, replete with anarchy, chaos and quasi-spiritual linguistic quirks. Avalanche toss players right into this turbulent land, and the game thrives in the moments where Max is jostling with War Boy raiders on the open road or tossing ignited cans of gasoline into their scrappy fortresses.

But it’s also a title which seems, at some point, to have gone through significant changes (perhaps related to its delay in 2014), and some of the hastier joins around the story pacing, resource systems and progression mechanics still remain. 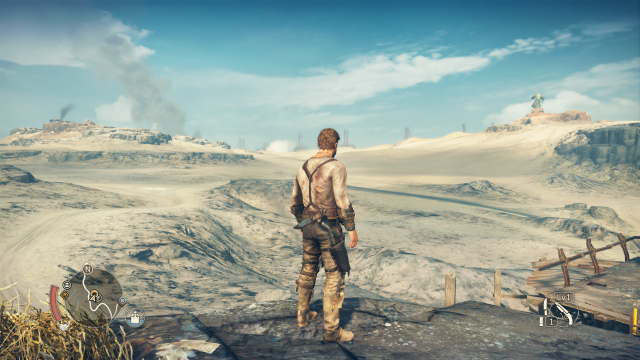 Turns out 90% of my screencaps are Max looking at deserts.

Befitting of a Mad Max game, the vast majority of the plot concerns Max’s tireless quest for a V8 engine. He’s forced to build a new car (with the help of the irrepressible sidekick/acolyte Chumbucket), after his famous Interceptor is stolen by a roid-abusing chap with the very Mad Max name of Scabrous Scrotus. Though this encounter leaves him bruised and bereft of car, clothes and equipment, Max does at least leave a chainsaw blade in Scrotus’ forehead for good measure.

In order to piece together a vehicle worthy of Chumbucket’s ‘Magnum Opus’ moniker, Max needs to roam the dusty wastelands, scavenging scrap, trading favours with local warlords, and ramming or punching every War Boy, Buzzard or general road filth who tries to get in his way.

Pretty much everything in Mad Max is upgraded through the scrap resource (including, somewhat bizarrely, Max’s combat skills), so any of the open world activities that reward scrap are potentially worth doing. Luckily, that’s basically all of them; so unless you have a worrying compulsion to clear the entire map of icons it’s possible to almost exclusively stick to the things you enjoy. A few of the story missions will force you into owning certain upgrades or tackling specific side-areas, but this is kept in moderation. 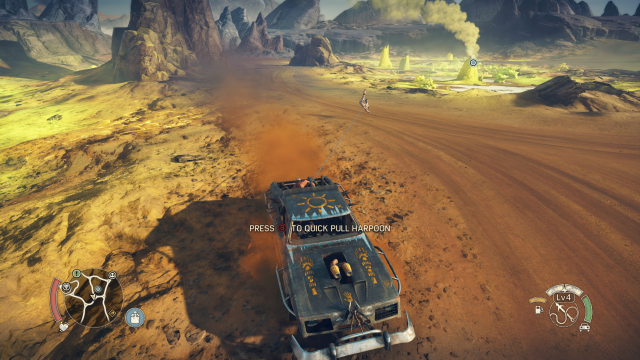 The spirit of Just Cause is strong in this harpoon.

Keeping that in mind feels key to enjoying the game, because although Mad Max somewhat presents itself as another open world icon-clearathon, it shines most brightly as a freeform chaos simulator. Appropriate really, as this is from the same studio who made Just Cause 2.

Avalanche’s art team have done just as tremendous a job as their technical division (in case you missed my prior article, the game runs incredibly well even on minimum-spec PCs), creating a dozen or so desert zones that actually look distinct from one another. Red, Mojave-like scrublands border rolling dunes, which in turn become rockier, mesa-filled landscapes, or areas pocketed by vents of near-luminous sulfur. For an area of land that’s ostensibly barren, it offers a palette of bold colours and striking, post-civilisation landmarks.

Roaring through these realms in pursuit of a convoy, harpoon primed to pull wheels off escorts, War Boy boarders tumbling in your wake, and a well-aimed shotgun blast turning another wheeled foe into a spinning, combusting ball of debris, is one of Mad Max’s most exhilarating diversions. The versatile Shadow of Mordor-esque photo mode isn’t just in the game for moody shots of the desert, it’s also for snapping some of the magnificent explosions in full bloom.

The various camps, hide-aways, and ramshackle dwellings scattered across the wastes do eventually end up seeming over-familiar. For a decent while though, it’s a delight to roll up on a new location, comb it for scrap, engage in some un-gentlemanly BatMax fisticuffs (it’s pretty much the Arkham system) with the locals, and explore whether there are any unique, handcrafted little dioramas contained with. Such encounters are only enhanced by the random events of Max’s world. You may end up having to deal with a honking patrol showing up while you’re on foot and vulnerable, or a powerful dust storm bellowing its way across the dry earth. 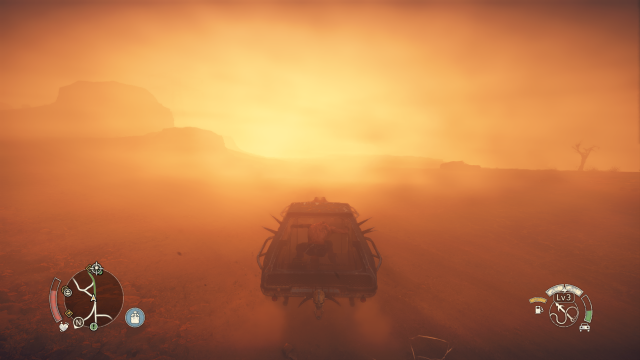 Chumbucket’s going to be digging sand out the engine (and his eyes) for a week.

Of such things are the finest of Mad Max’s moments made. There are some shonkier aspects though, which aren’t gigantic problems in themselves but are amplified by being repeated across (at absolute minimum) a 20 hour game.

Max has a bit of a case of ‘Geralt movement’ (pre Witcher 3 patching in an alternative), where the weight of his animation will often carry him beyond the ladder, box of scrap, or weapon you’re trying to line him up with. A great many things in this game demand that you stand somewhat perfectly in front of them and hold down A (or equivalent) for a bit, so that gets rather old.

It’s also extremely aggravating to have to watch an almost-cut-scene every single time – Every. SINGLE. Time. – Max tips gasoline into something or refills his water canteen (effectively your back-up health potion, and probably preferable to the other options of consuming maggots and dog food). This is borderline crazy, because I’m pretty sure it all still happens in-engine. Having the game cut to black after those actions makes very little sense. If modding is ever possible, the removal of these repeat irritations must be a priority. 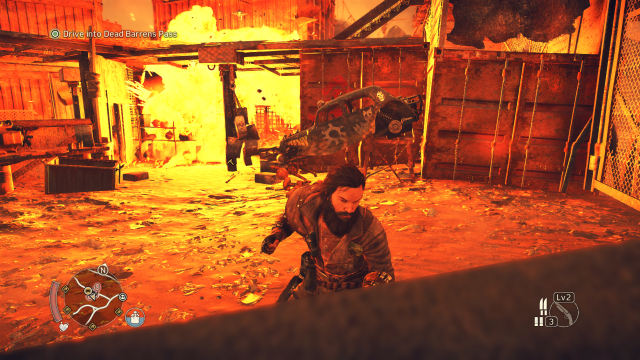 Though it doesn’t directly detract from a lot of the fun, Mad Max shows various signs of features being hastily changed or wrapped up before they were quite ready. The game’s opening tries to impress the importance of fuel and water for survival, when in fact those resources are now found in abundance across the wasteland (I never ran out of fuel, and having an empty canteen has no additional penalty).

Every ‘Top Dog’ mini-boss looks basically the same, attacks in the same manner (a couple do have assistance from underlings), and may even use the same voice actor. Encounters in the wasteland offer ‘intel’ on these fights, vaguely hinting at a sort of Mordor Nemesis system of particular weaknesses (or maybe that’s just part of my fevered Mad Max fantasy with named drivers as foes), but it’s obvious stuff like ‘he doesn’t like being shivved in the neck!’ The same tactics which work on all of them.

Clearing minefields seems like a hold-over from a time where Max was intended to regularly use a wider selection of vehicles than the Magnum Opus. You can still collect a full set of cars, but outside of races or a sneaky plan to drop mines in front of a convoy, only the mine-clearing buggy (and attendant dog) has such a specific purpose. Why that dog can’t just ride along in the Opus is never explained, but the buggy’s inability to fast-travel (meaning an often tedious drive out of your way to clear mines) and the boring nature of the activity itself mean it’s something you’ll probably go out of your way to avoid.

Unfortunately, some of the Magnum Opus upgrades are tied to the reduction of ‘threat’ in different regions, and that can mean having to take time off from your campaign of chaos to settle into some familiar busywork. Getting the top level harpoon (the only one which can reliably yank down the most hardy ‘scarecrow’ structures dotted around the land, and one of the most hilarious weapons overall), means sniffing out a whole lot of minefields. 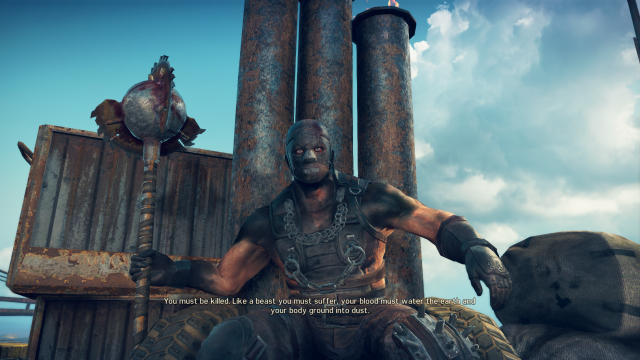 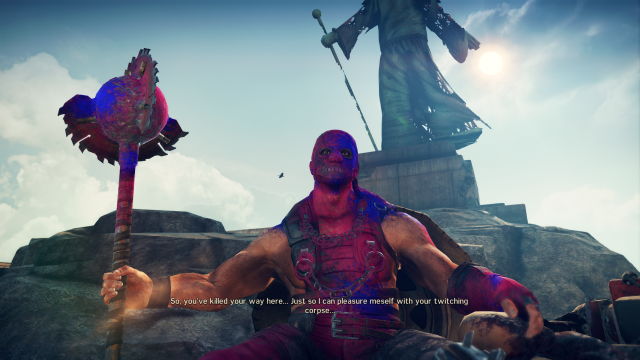 … are identical. Nice dialogue, though.

Some of the unlocking methodology may irritate, but the way upgrades for the Opus are handled is quite novel. Later armour and ramming options are not automatically the best way to go; they’re heavy, and become a trade-off with speed and handling (all the cars are driving on sand, so the latter can mitigate that ‘loose’ feeling a little). In this sense, you do actually have to design a workable car to some extent. It’s refreshing that the ‘last’ upgrade in a chain isn’t automatically superior by default, but is instead a new variable to consider.

Interacting with the Magnum Opus also means interacting with Chumbucket, the character who most keenly embodies the strange lexicon, combustion worship, and all around weirdness of the Mad Max universe. He jabbers on incessantly in his curious way, calling Max ‘Saint’ and eulogising about his deeds, but has been given enough lines (and enough odd charm) that his interjections don’t grate. It helps that he’s the finest marksman who ever lived, able to nail a sniper at 500m with a harpoon from a moving car. It also helps that he sounds like a more hyperactive version of Brad Neely’s Wizard People, Dear Reader narration.

The game’s other named characters are a fairly interchangeable set of local barons, villains and hype men (though I do rather like crotchety Pink Eye and Crow Dazzle), and the narrative turns into an amphetamine rush after Max gets his hands on the basic V8 engine (which can be upgraded many, many times, despite it being acquired about an hour before the conclusion of the game), but Chumbucket remains consistently sympathetic throughout. No matter how hard the story tries to tell it otherwise, he’s Max’s real surrogate family. 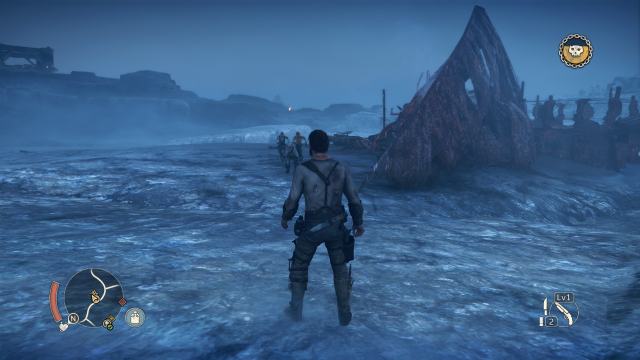 As somebody who adores Alpha Protocol, I can understand the love for a flawed game that has qualities that, for a specific type of player, will redeem all other ills. Mad Max has its fair share of quirks and odd design decisions, but creates a (literal) sandbox of anarchic chaos that’s both wonderfully rendered and, on PC, a technical marvel. A word on the sound design too, which is just as responsible as the art design and animation for capturing the whump of explosions and jaw-breaking BatMax punches alike. There’s much to revel in.

But although it’s appropriate that a game from this universe should feel like some aspects are misshapen or hastily bodged into shape to fit a grander vision, the annoyances really peel away at you over the course of a title as long as this one. Like the original 1979 film, Mad Max seems destined to be a cult classic; beloved by many, in spite of the components that appear to have been ripped out and reassembled, or otherwise abandoned to the desert basin.

FIFA 16’s celebrations video helps you fall over in style