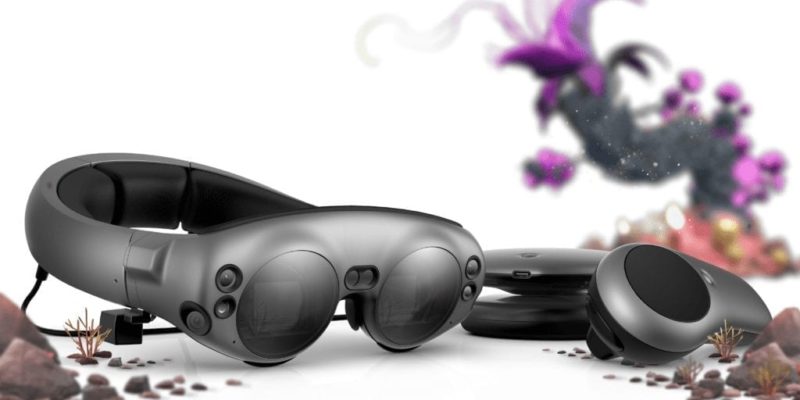 I have to admit that tending to an alien bonsai tree wasn’t on the list of things that I wanted to experience in mixed reality. Yet, I found myself strangely pulled in by Seedling, an almost meditative tree gardening experience developed by Insomniac Games for the Magic Leap One headset.

As Seedling creative director Nathaniel Bell explains, players are given the last seed from a world that was destroyed by something called “The Schmelling Incident.” They must nurture it and essentially rebuild the ecosystem. As players progress, they are rewarded with additional plants, each with unique looks and needs. 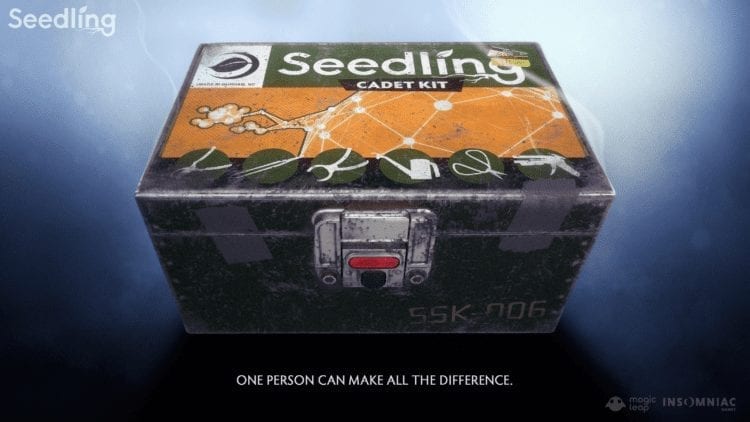 This was the first time I tried the Magic Leap, but it was not my first time with mixed reality. The Magic Leap doesn’t go around my head the same way VR headsets like the Oculus Rift or HTC Vive do. Instead, it rested on my head at an angle, putting much of the weight on my forehead and nose. While the headset isn’t uncomfortable, it does takes some getting used to and it makes adjusting it a little awkward. Especially with my flat Asian nose and features.

The Magic Leap One isn’t designed for people who wear glasses, either. A prescription lens insert will release in the future in partnership with unannounced eyewear makers. But even if the insert were available now, it would still mean glasses-wearers like me would have to purchase additional prescription lenses for the headset. That’s on top of the base cost of the device itself, which is currently at $2,295 for the Creator’s Edition I used.

Hopefully, the consumer version will be way less expensive, but it seems clear that Magic Leap’s augmented reality experiences will require quite an investment. Fortunately, the graphics in Seedling are high enough quality that I didn’t need my glasses to appreciate it.

The hardware itself is impressively light and discreet. A cable connects the headset to the Lightpack – a circular pod that does all the processing – which is designed to hook onto a belt or into a pocket. The device fit neatly into my pants pocket, and the cable stayed out of the way throughout the experience. There’s certainly no problem with getting tangled up the way you might with some VR headsets.

There are speakers built into the sides of the Magic Leap One in addition to having an audio jack. However, they fire at the side of the head instead of directly into the ears, so I could still hear everything that’s happening around me. It’s not as immersive as headphones, and anyone nearby can probably hear what you’re doing, but this technology seeks to augment reality, not pull you out from it.

“People like to compare virtual reality with mixed reality because they’re both headset-based,” said Bell, who had also worked on virtual reality games. “But there are different types of stories you can tell between the two. If you want to completely replace the world and replace yourself in a new one, then VR is a good platform for that. If the real world is your story, then mixed reality is the platform.”

But what really takes getting used to is the limited field of view. When looking through the Magic Leap lenses, you can clearly make out a box in the center of view. That’s where everything happens. There’s no augmented reality past the edges of the box. This, more than anything else, puts a damper on the experience, since you’re always aware that the field of view doesn’t cover your peripheral vision. Instead, you have to keep moving the magic window around to see things. 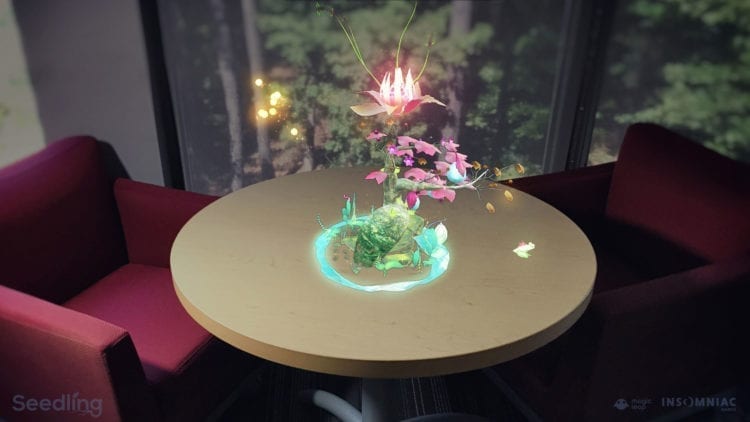 Although the Magic Leap includes a one-handed controller that has a touchpad and two buttons, not all aspects of the experience need it. For example, before the Seedling demo began, I was given a virtual book with sketches of different plants drawn in alongside text explaining some of their alien origins. I didn’t need the controller to turn the pages. Instead, it was easier to reach out with my free hand, pinch the corner of each page, and turn them manually. There were a couple of instances when the pages didn’t turn as smoothly as a real book, but I didn’t encounter anything too annoying.

As for the game itself, Seedling is a relatively straightforward experience at first. To start, you use the headset to scan a surface, and that’s where the base is placed. A seed is planted, and I was given a watering can to get it started. The game usually plays out in real-time, meaning that players will have to wait literal days for their tree to grow, but the demo was sped up to 11 days for my benefit. That made the tree grow to roughly 12 inches tall.

From there, I was given a handful of tools and tasks, like using tweezers to remove growths called “blight.” Then there’s pruning and feeding. The tree I was tending to ate light bugs, similar to a Venus flytrap but with long stalks coming out from it. I used to tweezers to catch a few of the glowing insects and fed them to the plant. That’s when it blossomed with beautifully colored effects. 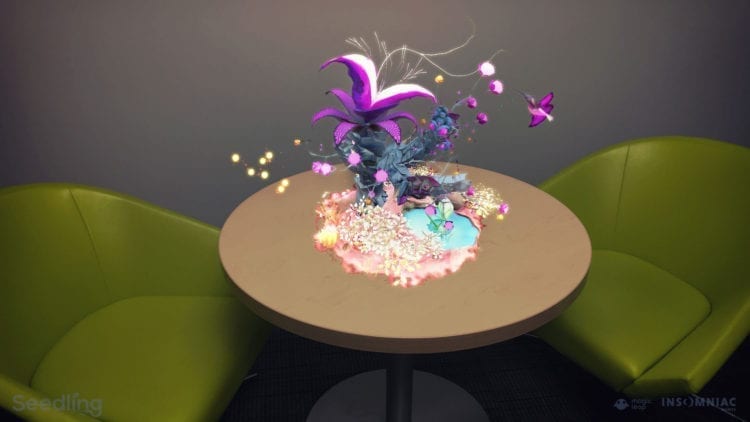 As I tended to the tree, life began to appear around it. For example, there was an alien frog hopping around and tiny pink butterflies fluttering near it. These are indicators that you’re doing a good job tending to your tree. They’re also interactive. The butterflies will react as you run your hands through them, and you can use your tweezers to poke the frog and make it move around.

The bright colors are entrancing, and it can be easy to forget that the tree isn’t real. A part of me always felt the need to reach out and touch everything. The game even synchronizes with the local weather. So, if it’s raining outside, you’ll see it rain on your tree.

Eventually, extra bulbs appeared on the tree. Some contained bonuses, like an ornament to change the weather. The white glowing ones could be dropped into the water, where it dissolved and had its energy absorbed into the tree, encouraging faster growth. However, the fast growth is subtle, so I had to look closely to notice it.

While tending to the tree, the field of view became less of an issue, but I was still reminded of it whenever I turned my head a little too much. Still, playing Seedling can be a relaxing experience, and I can see it as being a way to de-stress after a long day. According to Bell, Seedling should take about 10-15 minutes a day to play, and the rest of the time can be spent admiring your work. It would take a little a little over a month to complete the campaign.

Each plant is procedurally generated, and the real world will impact how the tree grows. Trees will remain persistent according to where they are placed, and they will react to what’s around them. For example, place a tree on a bookshelf and its branches will grow around the edges of the shelves. Trimming away leaves will change the look, and cutting the branches will encourage the tree to grow in different directions.

Even though players will have multiple trees to place wherever they want, the trees will not interact with each other. However, players can remove bulbs from one tree and give it to another. To keep players from being overwhelmed with too many trees, players will only need to tend to one active tree at a time while the rest go into “hibernation.”

In the meantime, players can use the Magic Leap’s built-in features to share photos and videos of their unique trees on social media. I was disappointed to learn that Seedling gardens can’t be seen through multiple Magic Leap headsets. As unlikely as the scenario might be, multiplayer capabilities might add another layer of immersion to the experience. 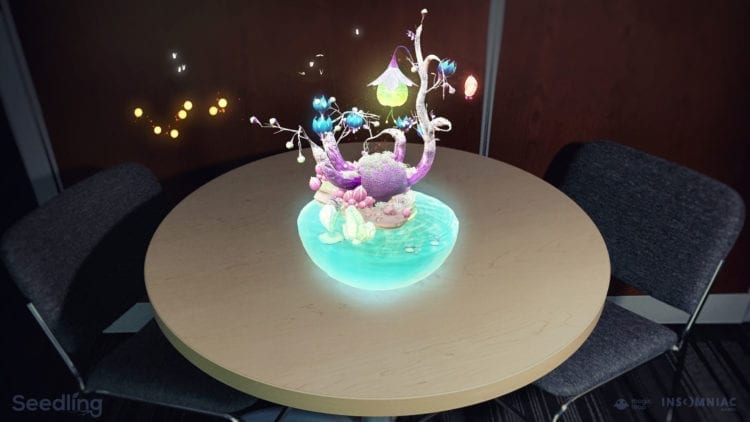 But if we set aside the cost of the hardware, Seedling‘s main issue may be that it takes the whole “almost real” concept a bit too far. The game will continue to play out whether the player tends to tree or not, and there’s no way to freeze it. Similar to actual house plants, these virtual bonsai trees will begin to wilt if neglected and perhaps acquire layers of blight. It’s unclear if the plants will die if left for too long, but regardless of that, the lack of a pause feature certainly makes taking a vacation inconvenient.

There will be tools to revert the active tree back into a seed, but that would still mean potentially losing weeks worth of progress along with all the unique characteristics the tree acquired. Another option is to simply take the Magic Leap device with you wherever you go. It’s small and light enough to pack, but I can understand if there are some reservations about the device on trips for the sake of tending to virtual trees.

Still, the Magic Leap does offer an impressive experience. I felt a bit disoriented after I took the headset off and the alien tree disappeared from view. Even with the limited field of view, my senses had grown used to seeing it sitting on the table, and it was jarring to have it suddenly vanish. I suppose that’s a sign that I truly experienced the “magic” in action.

Seedling for the Magic Leap One releases on December 5, 2018.

Destiny 2’s Black Armory DLC Is Out, And It’s Not What You’d Expect

By Cameron Woolsey15 hours ago
Features