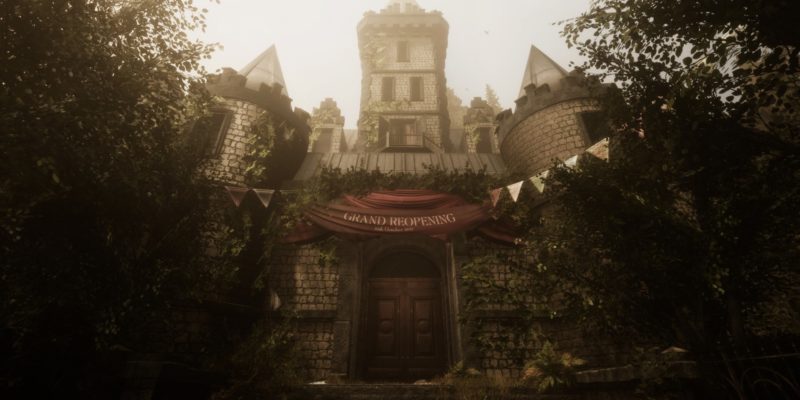 I love a good horror story. What I don’t love is a horror story that isn’t the least bit scary to the point that it technically isn’t even horror. Maid of Sker tries to build dread and scares with a fantastic presentation and strong map design. However, it’s hamstrung by an extremely lame, toothless premise and awful stealth “gameplay.” This is one hotel that you’ll be very glad to check out of any time you like, although the bitter aftertaste may never leave.

Dashed upon the rocks

I’m going to dive into spoiler territory for Maid of Sker. I wouldn’t normally, but anyone curious about it deserves to know the main premise before they buy. You play as Thomas Evans, a voiceless composer whose girlfriend Elizabeth sends him a letter from the Sker Hotel. Her family has trapped her in the attic and she needs rescuing. So Thomas boards a train and makes his way to the hotel to save her.

The journey to the hotel is without a doubt the best part of the game. Maid of Sker‘s artists did a marvelous job of setting the stage. Once you get into the hotel, you’re greeted with a dusty, dilapidated building thick with tension. It’s honestly enticing before the game shows what it has up its sleeves. The basic gist is that Elizabeth’s family was robbing a shipwreck and found a literal siren in a cage in the hold. So, they did what any group of giant idiots would—they brought it to the hotel, copied its song, and used it to try and get a ton of visitors. 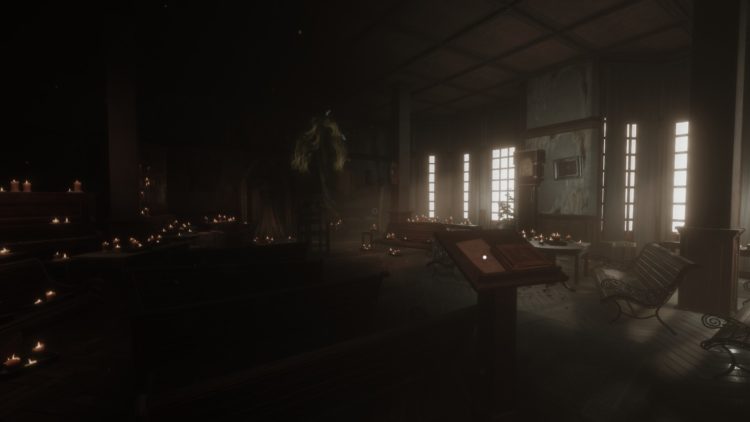 This plan is so asinine and banal that even Lex Luthor would roll his eyes. Naturally, they end up murdering a bunch of people for some reason. Before the events of the game, her father tries to force Elizabeth to sing the siren’s song and get new visitors. But something goes terribly wrong! Forsooth!

The overall narrative is laughable, even if the voice cast is solid and the dialogue itself is fine. It boils down to an obvious twist and uninteresting binary choice between good and bad endings.

Blind as a bag

I’m sure you’re dying to know what sort of monstrosities would be created by a siren’s song gone awry. The sad answer is two guys with cloth sacks on their heads. While navigating Maid of Sker‘s mostly linear corridors, your only obstacle are these two guys, one of which is recycled ad nauseam. For the vast majority of the game, you’ll just be hiding from this one enemy character model. He’s not remotely scary or challenging to deal with. Areas are often crawling with him and his clones. The other guy is overweight and doesn’t wear a shirt. You only see him a few times.

As the enemies in Maid of Sker wear cloth sacks on their heads, they can’t see you. Therefore, you want to make as little noise as possible. As long as you’re crouching and a couple of feet away, they can’t hear you. But if they get super close, they can hear you breathing. Thomas can hold his breath to deal with this. Unfortunately, Thomas has the lung capacity of a toddler and can only hold his breath for 15 seconds at a time, at which point he has to gasp for air. If you’re waiting for one of the game’s molasses-esque enemies to pass you by and Thomas runs out of air, they’ll find him and beat him to death. 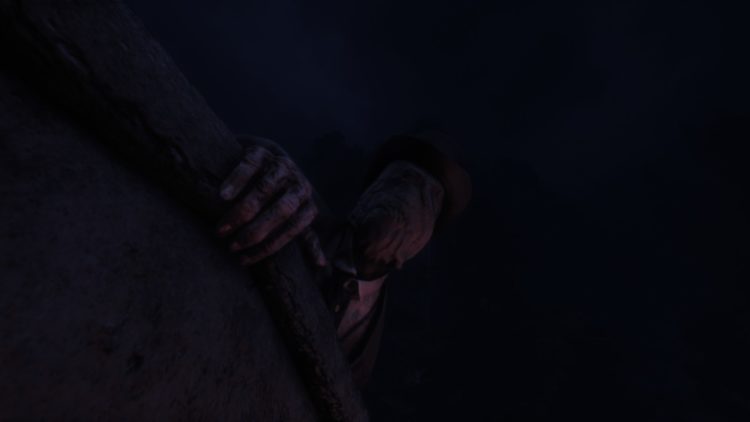 Although these enemies are as basic and dull as possible, they do a large amount of damage. If they hit Thomas four times, he dies. There are phonographs scattered throughout the locations that allow you to save, though. On the hardest difficulty, your saves will be limited, but the other two have no restrictions. Thomas also finds a device with limited ammo which makes a sound that stuns his foes. It isn’t particularly useful, and I seldom needed it.

As simple as all of this sounds, Maid of Sker‘s design makes things extremely annoying. The hotel’s hallways are narrow, and you’ll often be stuck walking behind an enemy for minutes at a time. Playing the game is often akin to simulating rush hour traffic. It’s so boring. To make matters worse, you can spend minutes slowly crouch-walking behind an enemy, only to have no way to get past them once they reach the end of their patrol. Your options are to go back where you came and try and time it differently, use the sound weapon, or get grabbed and go back to your last save.

But it gets even worse from there. You’ll often open doors and walk straight into patrolling enemies with no way of knowing they’ll be there. Or you’ll open a door and they’ll walk straight into you. On multiple occasions, I spent minutes caught in sackboy traffic, only to open a door and walk straight into one of his identical brethren and then get beaten to death. And Thomas can’t do a thing to protect himself other than run or use the sound weapon. And, even though they can’t see him, if he makes enough noise to get detected, they magically know exactly where he is even if he’s mostly gotten away and isn’t making any noise. It’s dreadful.

The hotel in Maid of Sker is also very dark. Since the enemies are blind, Thomas could easily grab one of the many lanterns or light sources he comes across and use one of them to light his path. But he can’t pick any of them up. He has a giant advantage and just ignores it because he’s dumb. The worst part of the game is the floor where there’s a giant man with a sack on his head. But he always knows where you are, so you have to accomplish your goals while running from him. If he catches you, he kills you instantly. It’s all moronic. Hilariously, there’s a room he can’t enter. Being in there results in him standing and staring at you from the doorway before impotently walking in a tiny circle to face you again. 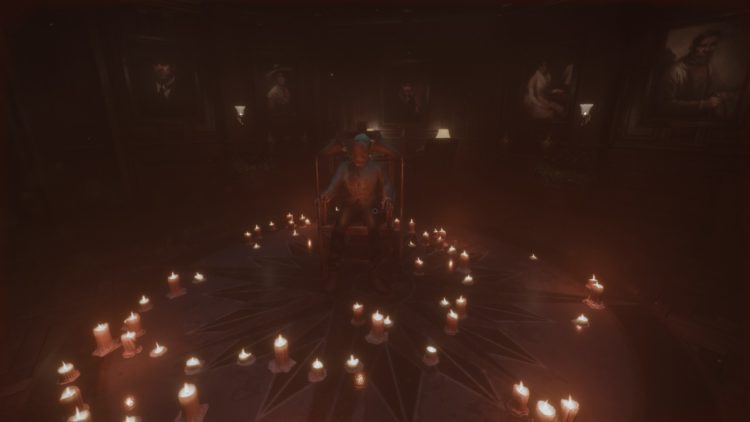 The illusion of freedom

Upon entering the hotel and finding doors that require specific keys, I imagined Maid of Sker would be akin to early Resident Evil games. But it isn’t. Exploration is almost completely linear and there’s rarely any reason to backtrack. Your main goal is to collect eight MacGuffins and then return to the hotel lobby. But there are very few doors that require keys, so you just go where the game tells you until it ends before you even hit the five-hour mark. Despite how short the game is, it also feels padded.

Maid of Sker has very strong visuals and the hotel itself is well designed. But everything else, from its gameplay systems to its progression and foes, is so weak and ill-considered that I can’t imagine most people enjoying what little it has to offer. It might be billed as a horror title, but the only scary thing about it is realizing what you’ve spent money on once the credits roll. 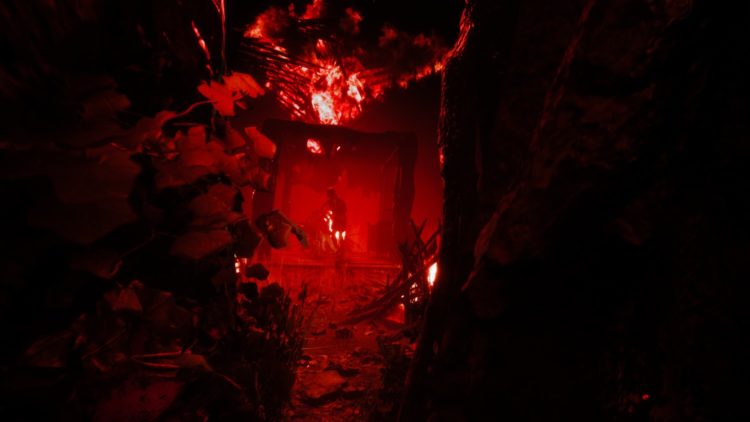 Maid of Sker has very strong visuals and the hotel itself is well designed. But everything else, from its gameplay systems to its progression and foes, is so weak and ill-considered that I can't imagine most people enjoying what little it has to offer.