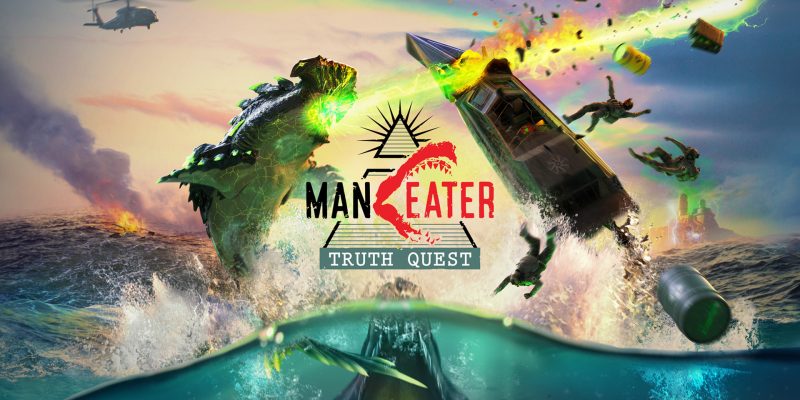 Fall down the conspiracy theory rabbit hole this summer with Maneater‘s new DLC: Truth Quest. The ‘shARkPG’ expansion sees the return of the bull shark and investigative journalist Trip Westhaven on a quest to discover if mutated sharks truly exist. Dive into potential government coverups as you continue to evolve your shark in new regions. It may sound crazy, but it’s no April Fool’s gag.

Tripwire Interactive announced today that the surprise DLC picks up where the Maneater base game left off. For those who are unfamiliar, the survival game followed the growth of a young bull shark after a cruel fisherman killed her mother and left her disfigured. Players traveled through open waters as the shark to evolve and take down the fisherman. Chris Parnell voiced Westhaven, who narrated Maneater via an in-game reality TV show.

Maneater will show Truth Quest through the eyes of Westhaven’s ViewTube channel. The journalist investigates Port Clovis and the Naval Wildlife Organization (NWO) to uncover the truth about scientifically mutated sharks. Meanwhile, our beloved bloodthirsty bull shark continues to grow bigger and stronger, despite man’s efforts to stop her.

Tripwire’s new trailer for the Maneater DLC features a commercial for Westhaven’s channel, Truth Quest. Westhaven teases the mysterious shark mutations that his crew saw while filming Maneater and suggests that government forces may be to blame. Fans of the first game may recall the evil fisherman’s tales of sharks with armor and electric weapons — as it turns out, those stories may be true. Check out the full trailer below.

In addition to this riveting story, the Maneater DLC will bring new loads of new content. Players can evolve their shark to even bigger and better sizes and discover new creatures to consume. New military forces provide even greater obstacles, while new objectives keep players busy. There’s no date yet for Maneater: Truth Quest, but it’s expected to arrive this summer on consoles and PC via the Epic Games Store.

Outriders: Is it better to sell or disassemble your unneeded equipment?