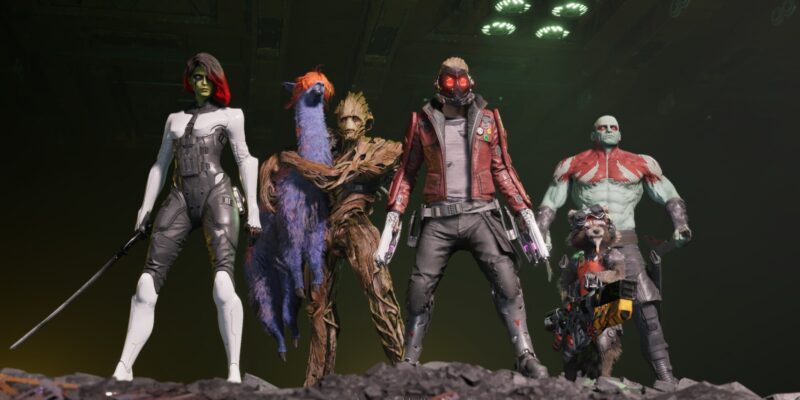 Whether or not Marvel’s Guardians of the Galaxy would work always hinged on the characters. If Eidos-Montréal didn’t get those right, the entire game would miss the mark. Having the team behind the last couple of Deus Ex games was certainly a surprising choice. But I was confident that the folks at Eidos could build a narrative backbone and cast of characters that do this franchise justice. Lo and behold, they have. The game’s narrative can drag and it honestly goes on too long, but it’s such a joy to spend time with this version of the cast that the occasional missteps don’t distract much from the wacky space adventure.

Marvel’s Guardians of the Galaxy takes over 20 hours to tell a fairly simple tale: Star-Lord accidentally frees something that ends up allowing a church to threaten the entire galaxy. It all starts when the team is searching the Quarantine Zone to find an animal worthy of selling to the feared Lady Hellbender, a warlord who has her own monster preserve. Instead, things go sideways and the team finds themselves having to scramble to set things right. Along the way, they’ll contend with the Nova Corp, Lady Hellbender herself, and a fanatical church hellbent on enslaving the galaxy.

I’ll get to why the characters are such a rousing success, but the narrative pacing here is off. The game does the same thing most of the DC shows on The CW do. It attempts to pad out a smaller story by having our heroes go up against the big bad who is just too strong to fight because reasons. Then they redouble their efforts and try again, only to be pushed aside once more. Finally, they fight the big bad again and they go down kind of easy because their plot armor is gone. The game tries to get around this by forcing our heroes on arbitrary detours, but it’s clearly padded to extend the runtime. 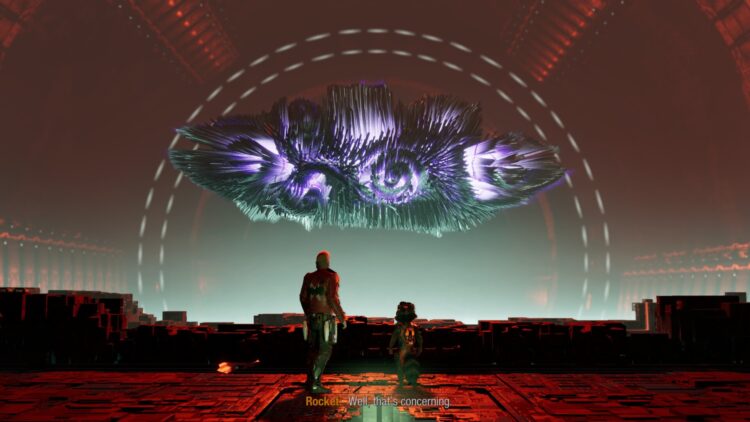 Long in the tooth

Marvel’s Guardians of the Galaxy would have had a better story overall had the game ended at the 15-hour mark, as it was at a perfectly acceptable stopping point around there. But then it goes on for another seven hours or so. I had a good time with those last seven hours, but it would have been better at a more steady clip. Thankfully, as I said, the characters really do knock it out of the park.

The dialogue is uniformly excellent. It’s consistently comical, engaging, and there’s constant character development and moments of pure pathos. These characters are mostly funny, but they’ve got a lot of pain to sift through. Marvel’s Guardians of the Galaxy is at its best when it focuses on its cast. Not only do they all have individual arcs, but they also have an arc as a team, too. At first, they don’t quite get along, but they start to gel believably over the course of the story.  The voice cast is almost entirely above board, save for one bizarre choice. Rocket, Drax, and Groot are pitch-perfect. Gamora sounds too normal and lacks the searing intensity I expected from the character, but her performer’s acting is still of exceptional quality.

The supporting cast is similarly grand — the problem is Star-Lord. He simply sounds too goofy and entirely unbelievable a lot of the time. He’s not awful or anything, but his cartoony performance undermines the proceedings with regularity. It doesn’t help that he’s got an extremely noticeable Canadian accent, despite Peter Quill being from Missouri. It’s jarring. Simply put, one of the most important characters of the game feels miscast. 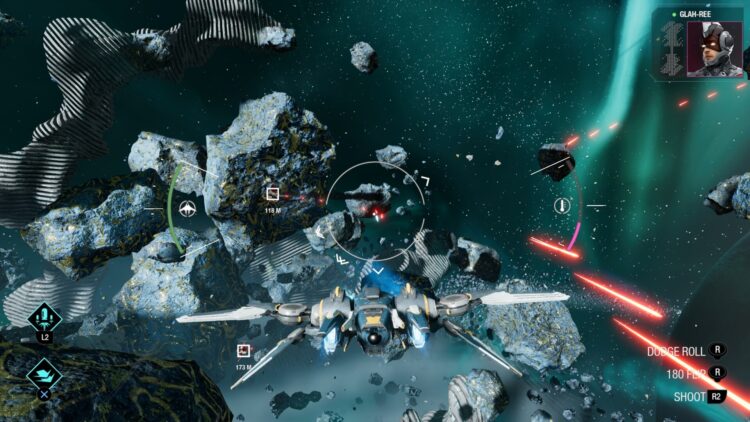 Heavy is the weight

Despite this being a game focused on the titular Guardians of the Galaxy, Star-Lord is the only playable character. You can choose from a couple of his different dialogue responses a lot of the time, plus there are a fair number of choices presented to you throughout the game. These don’t make a big difference, but they do create noticeable ripples to the point that it’s worth replaying sections to see how they turn out when you go the other way. As far as gameplay goes, Marvel’s Guardians of the Galaxy is broken into 16 chapters that focus on combat, platforming, and general navigation. You even get to dogfight and dodge obstacles in the team’s ship, but only in a couple situations.

The controls are good, although there’s no way to run, which can make getting around a little slower than I’d like. Chapters are set across a wide variety of environments with secrets to find, including crafting components and new costumes for the whole crew. As Star-Lord, you give orders to the team to help bypass obstacles and in combat. You’ll tell Drax where to move a climbable objects, order Gamora to cut a new opening, or have Groot create a root bridge. Similarly, they all have a host of useful abilities that you can order them to use while fighting.

Star-Lord fights with his element guns, which get the actual four elements as opposed to how they are in the movies. The game takes its personality and general aesthetics from the movies, but the lore and world-building are deeply rooted in the comics. The four different elements can be used to interact with things while navigating, as well as during combat. Ice freezes enemies, electricity shocks them, wind pulls them to you, plasma sets them on fire. And then there’s the regular blaster fire that lets you shoot rapid shots or charge them if you buy the upgrade. Another upgrade gives you tactical reloads too, as the guns overheat quickly. 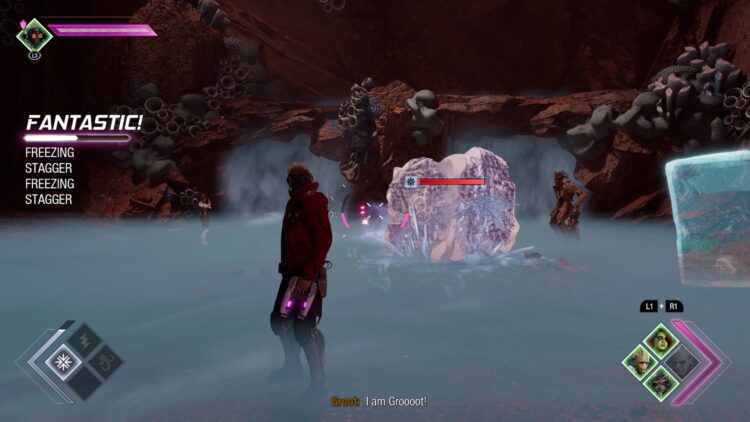 Marvel’s Guardians of the Galaxy pits you against normal humanoid enemies and stranger alien ones. They all have weaknesses and specific tactics that work better against them. Star-Lord can dodge out of the way and hover while shooting, so the mobility here is awesome. Using your teammates’ abilities is similarly satisfying. Their moves are all good for different things: Gamora does the best single target damage; Drax does the best stun damage; Rocket has the best AOE attacks; and Groot can pin foes in place. Encounters grant experience that can be used to purchase new abilities too, so you’ll often feel like the team is getting stronger.

Star-Lord also gets special moves, the best of which lets him rapidly blast foes uninterrupted for massive damage at the cost of leaving him totally vulnerable. He has a shield, but it recharges slowly. Enemies drop health when dispatched, though, so staying alive isn’t a problem. The combat is a lot of fun, but it does get a little old as the game rolls on. It’s not dead simple, but it’s not complex enough to stay interesting for over 20 hours, especially with the endless enemy waves in the game’s final sections. If you still want more, though, there’s a new game plus where you get to keep all your stuff.

Overall, I got a lot of enjoyment out of Marvel’s Guardians of the Galaxy despite its wonky pacing and how often Star-Lord’s personification broke my immersion and weakened moments. This is a lengthy, funny, and endearing game that treats these wonderful characters with a lot of respect, even if Star-Lord’s constant, “okay team, we got this” motivational schtick can feel too trite or cloying. Anyone looking to see what they love about the Gunn movies will see a lot of that distilled here. Also, freezing things and shattering them is always a hoot. 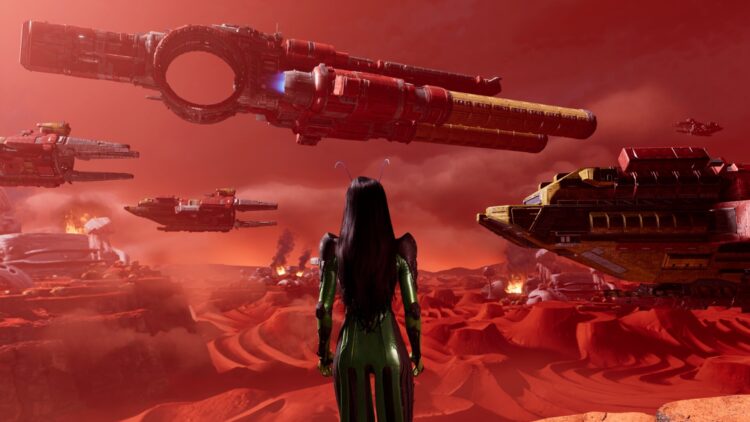 Marvel's Guardians of the Galaxy

The plot meanders and the game is somewhat too long, but it's still a great time and well worth experiencing for Guardians fans.

By A.K Rahming6 days ago
Reviews