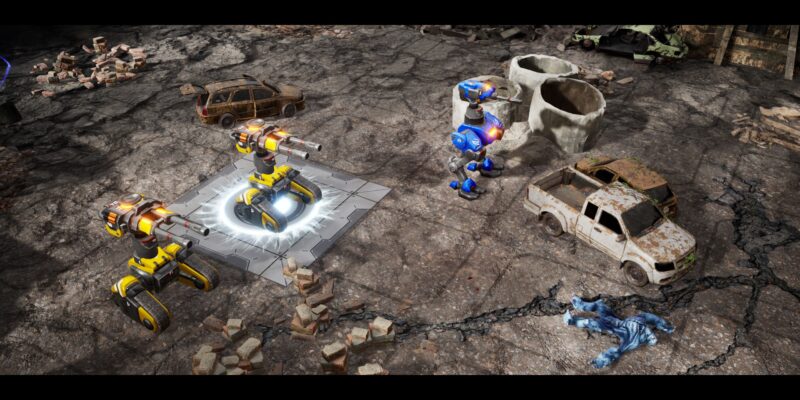 Hey, did you know that in the Battletech miniature wargame, the mechs aren’t plug-and-play? You choose one of the variants of, say, Atlas, and that’s it, no switching weapons and systems. Well, what if a giant robot game was the complete opposite of that? This intrepid reporter investigates Mech Armada Early Access.

Monsters! That’s what suddenly and inexplicably invaded Earth. Humanity reacted to that like we always do when faced with a technologically inferior enemy with no airpower. We died in droves and went into hiding. Only a single mad scientist is working on the project to win back the surface. Giant robots that nanobots assemble out of pure energy! You’re going to lead one such force, again and again.

And with that, I’ll tell you that Mech Armada is also a roguelike, but with stakes lower than ever before. The monsters already won on the surface, and you’re just trying to take it back because a mad scientist told you to do so. If you lose, you can just come back out for another go. The reason why you’re starting from scratch (except for some meta upgrades) is never elaborated on.

Once you hit the battlefield, Mech Armada is a fairly conventional turn-based strategy game. You move your units, then the enemy moves. Along the way, you’ll want to grab battery locations to collect power and summon reinforcements. The enemies only have what they start with, so you’re at an advantage in that regard. You can’t really kite enemies to farm energy, as there is an unexplained wall of energy that moves across the battlefield, killing everything it touches. This actually benefited me a few times when a chonker boss didn’t get out of the way in time. 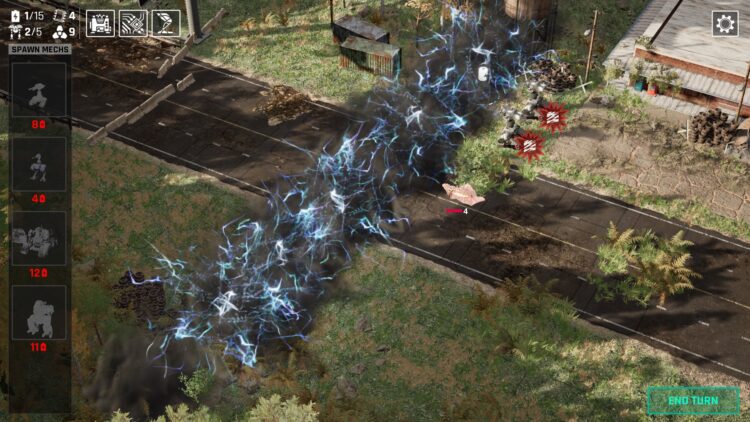 The monsters are often stronger than any individual mech, so you’ll need those reinforcements. Other than that, the map also features energy you collect for the meta upgrades – and you have to grab those before the enemies do. There’s also a variety of annoying barriers, like rough ground that only walkers can traverse.

But the real meat and bones of Mech Armada is constructing the right mechs to win. You always start with the same two designs, though you can switch the parts around. Considering that the torso parts are identical, it’s only about choosing which gun to match with a specific propulsion system. 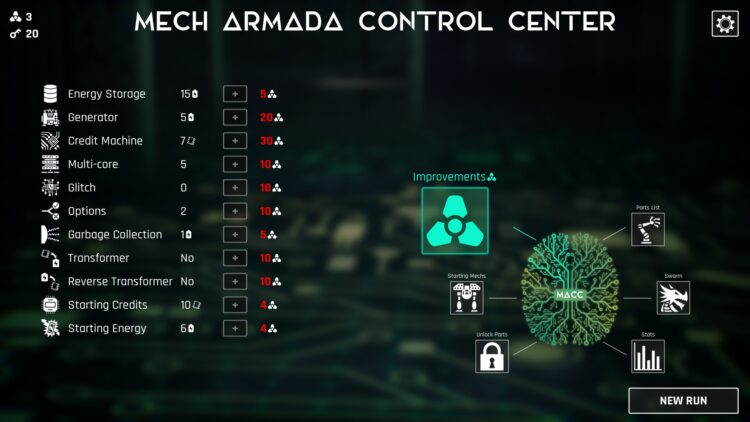 Meta energy is to be saved for post-run upgrades. None of these the boring mechs you start with.

Oh, and this is where the deckbuilding aspect comes in. When you unlock a mech part, you can only unlock a single instance of that part. It can only be used in a single design. Want to get another Double-Double, the starting double-barreled cannon that can shoot diagonally and outrange the starter Machinegun? Best spend some of those credits to unlock another weapon while praying to RNGesus that you get the Double-Double instead of a flamethrower and an armor booster.

While this can be frustrating, it is a fairly elegant way for Mech Armada to prevent you from just doing the same thing over and over. Though on my last run, I determined that extremely cheap bots can take you a long way. For instance, you can attach the MG to a basic starter track chassis. 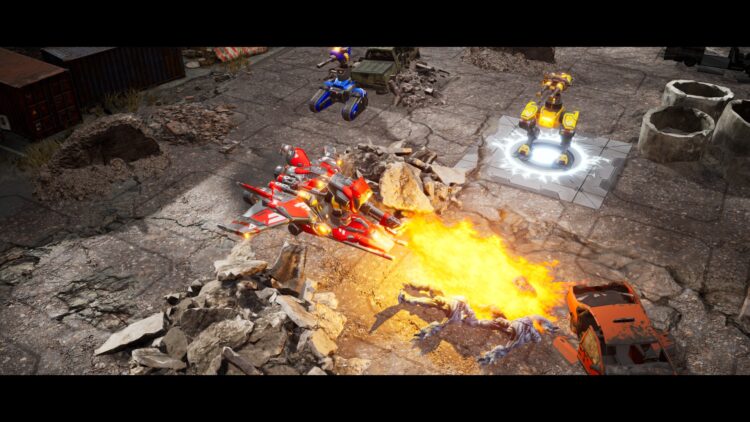 Killing the last enemy on the map gives you a close-up, and yes, that is a flying flamethrower

But in all cases, components in Mech Armada have their own benefits and drawbacks. Sure, the walker legs can cross rough ground, but these give the mech less HP and prevent it from moving diagonally. The MG might have pitiful range and no ability to fire diagonally, but it deals stable damage and doesn’t add anything to the summoning cost. If you have any to spare, it could be a good close-in weapon for two- or three-weapon torsos that usually cost a lot of energy.

Every summoned copy of a mech part makes additional summons more expensive. That means that the first tracked MG is 2 energy, the next one is 4, and so on. Fortunately, the price goes down again as mechs are destroyed. It adds up though when bots have respectable weapons and components. And since upgrading the blueprint between battles doesn’t transform the ones already in the field (and survivors carry over between battles), you might need more energy than you have battery capacity to summon a new version unless you lose (or scrap, for a refund) the one in the field.

It doesn’t end there, as all unlocked parts can be (individually) upgraded once. This doesn’t make the overall design more expensive, though you’ll have to spend energy to upgrade units on the field. Part upgrades usually mean increased health, but can also be stuff like the Kamikaze torso which boasts both more HP and an explosive damage boost. 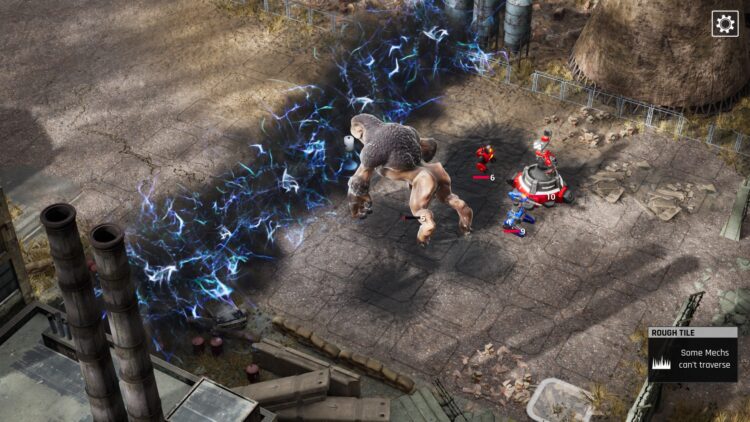 The boss is about to learn how Death Wall got its name.

So these are the tools at your disposal in Mech Armada. Unfortunately, the monsters are not nearly as interesting while also lacking a real unifying theme. It reminds me of the dumb hordes in EYE: Divine Cybermancy that had no uniformity to them and might as well have been purchased assets pressed into the role.

The future could look more flashy

This could still be the case in Mech Armada, as many of the mech torsos are obviously meant to be manned. However, the robots are just remote-controlled drones with the expendability of a Supreme Commander T1 unit. The guns and propulsion systems are also generic enough to be online purchases. And you know what? If it works, more power to them.

However, it’s in the presentation that Mech Armada falters the most, and the cheap 3D art doesn’t help. Yes, it’s fun to see the ridiculous mech designs (parts don’t scale to each other, so you can have walkers that look like they’ve skipped leg day their entire lives), but it all looks cheap and bland. In a sense, it’s actually a novel feeling, because I’m more used to bad gameplay being matched by terrible visuals. I don’t know the last time I was upset solely by the game’s visuals. 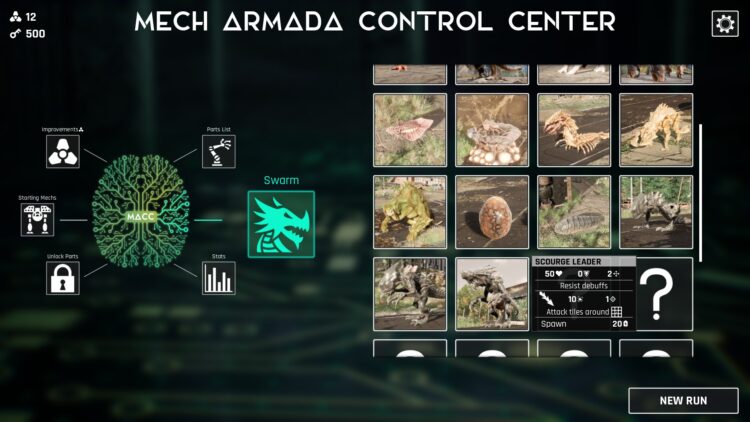 The Scourge enemies go through stages of evolution on the field, but the real annoying thing about them is the damage-over-time effect that strikes at the start of your turn, meaning that they functionally one-shot every mech.

The audio is also lackluster – and that’s before you get to the fact that the good doctor’s line delivery is a bit flat. On the other hand, indie games, especially strategy titles, love to skimp on audio as a cost saving measure.

Given enough time in Early Access, Mech Armada could be a fun small game with some polish. I don’t see it winning many awards in the future, but it’s competent. And in a twist that I entirely didn’t expect, I’m telling the readers, for the second time in a month, to wait for a game to come out of Early Access before pulling the trigger.