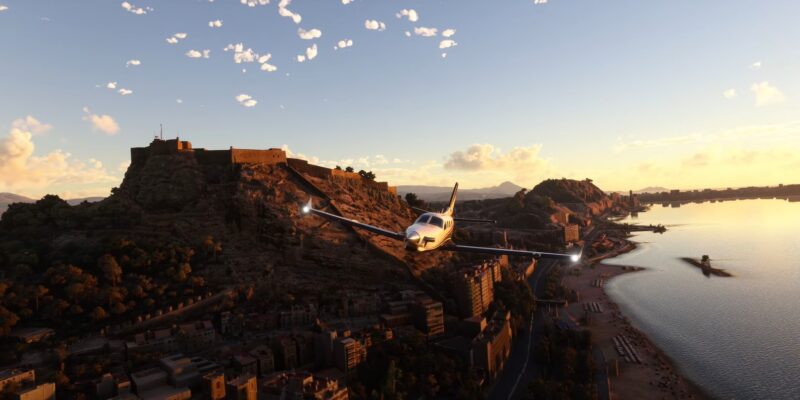 With this update, dense cities including Lisbon, Barreiro, Malaga, Bilbao, Cascais and Coimbra are all now rendered in high-quality, full 3D photogrammetry. As you roam throughout the peninsula, you’ll spot various new handcrafted points of interest. This includes major landmarks like the Alamillo Bridge, the Tenerife Concert Hall, and Estadio Algarve, as well as natural features like the Rock of Gibraltar.

Iberia refers to the large landmass of western Europe that encompasses the countries of Spain and Portugal. The British Overseas Territory known as Gibraltar is also a part of this update since it’s connected to Spain, along with Andorra, a super small principality that is independent but landlocked between France and Spain.

To help you find and experience some of these freshly made locales, Asobo has prepared four new Bush Trips, five new Discovery Flights, and five new Landing Challenges. Additionally, over 100 airports across the Iberian Peninsula have been updated in Microsoft Flight Simulator. The global map also received an additional 1000 airports that were not previously present in the simulator.

While the client update does include the core game files, to gain full access to all of the content included in World Update VIII, you’ll have to run an additional download from the in-game Content Manager. This is to ensure you’re not downloading extra data in the event that you don’t intend to check out what virtual Iberia has to offer.

Other than the scenery enhancements, this new World Update doesn’t really do much else for Microsoft Flight Simulator other than make some tweaks to Asobo’s Junkers JU-52 payware prop. Although Asobo has not announced this yet, by simply following trends, we can anticipate that the next full Sim Update will launch within the next few weeks.