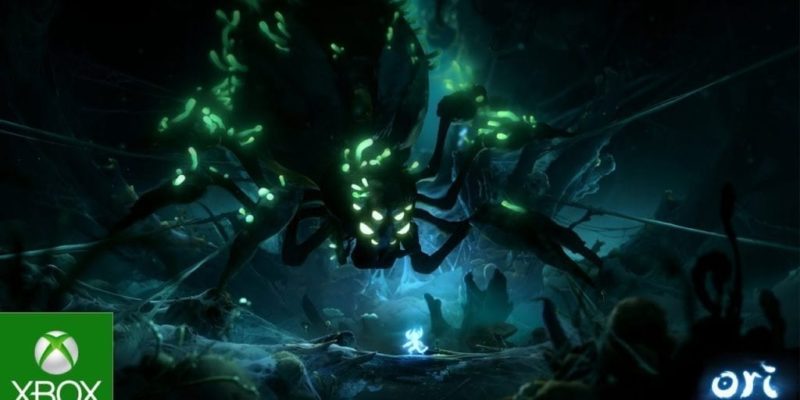 Fresh after we saw a glimpse of the The Outer Wilds, Microsoft teased some new gameplay footage for Ori and the Will of the Wisps. Developed by Moon Studios, the game is a sequel to the successful Ori and the Blind Forest.

This Metroidvania sees the player controlling Ori, a guardian spirit who travels through an ambient and mysterious world. Much like the first entry in the series, the game will feature puzzle solving and platforming. Developed using Unity, Ori and the Will of the Wisps is set to release for February 11, 2020.

The game trailer below shows us some really huge spiders. That, and we get a glimpse of our spirit hero running over some truly stunning background levels. This game looks to have a wonderful and unique art style, much like Blind Forest did. It also uses some interesting visual techniques, like having the foreground appear to be in greater focus than the background. If you notice when Ori is running around, the area behind him is in less focus than the ground he stands on. This type of 2.5D effect gives the game a sharp and stunning look. It’s one of the reasons why the original game received so much praise when it first released.

Enemies in Will of the Wisps look vicious

The trailer below does an excellent job at showing how threatening some of the enemies are. The spider unleashes its web at Ori and lets out a sort of guttural noise while doing so. Aside from the spider, there is a giant monster with enormous arms that almost looks like some biological mech-hybrid. There’s a wolf-like creature with glowing eyes, and something that resembles an enormous snake but with fire coming out of its mouth.

All of these serve to remind us just how small our hero is, and what great challenges he must over come on his journey.

Ori and the Will of the Wisps was first announced in E3 of 2017.