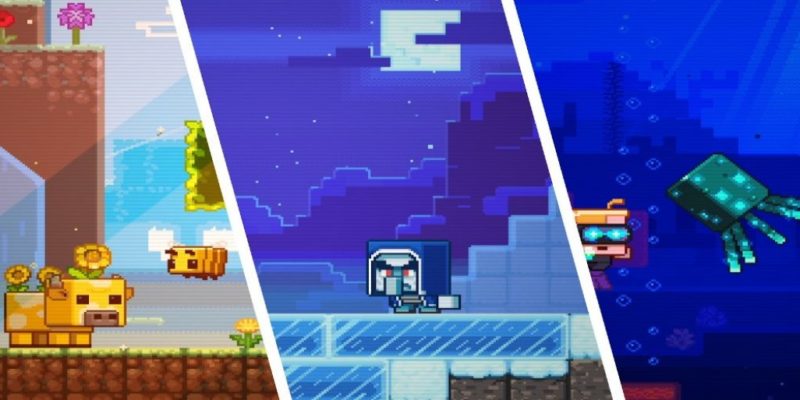 Mojang is offering its fans to vote on what may kill you next in Minecraft. To be fair, two of the three available options are creatures that’ll likely not hurt you. Maybe. This is Minecraft, after all, and I know plenty of people who made the mistake of attacking Zombified Piglins out of fear. Mojang is asking for you to vote during the upcoming Minecraft Live livestream on October 3. If you want to help make your mark on Minecraft history, put that date in your calendar.

As mentioned, the company is offering three choices for the next mob. And they range from completely adorable, to adorable but a little grumpy. The Moobloom is the mob that I feel may gather the most votes in the end. It’s easy to see why, as the little yellow fella is almost as cute as the bee. In fact, according to the trailer, Mooblooms and bees are the best of friends. So cute. Next is the Glow Squid, a squid that glows. It’s not that complicated of a mob. However, I can see it taking up space in a player’s aquarium offering some mood lighting. Finally, we have the Iceologer, who, unlike the prior examples, is not so friendly.

Two of the three options are neutral mobs, so keep in mind which one you’d like to meet on a random sunny day. The Iceologer stands as the lone hostile option, ruling over the new mountain tops of the Minecraft world. He’s an illager wrapped in a blue cloak and hood, and sports some mean, red eyes. Apparently, when approached, he’ll “hurl flying ice clouds at you.” I’d be more annoyed about that if he also wasn’t so darn adorable and grouchy.

Where to vote for the next Minecraft mob

You have the options, but where do you drop the ballot? Mojang is hosting the Minecraft Live show over at its site on October 3 at 12 PM ET. During which, you and your fellow miners/crafters can vote for your mob of choice over at the Minecraft Twitter account. Said account will drop a new poll during the show, allowing you to click for your favorite new mob.

For more information on the possible new mobs, head to the official page and give them a look.