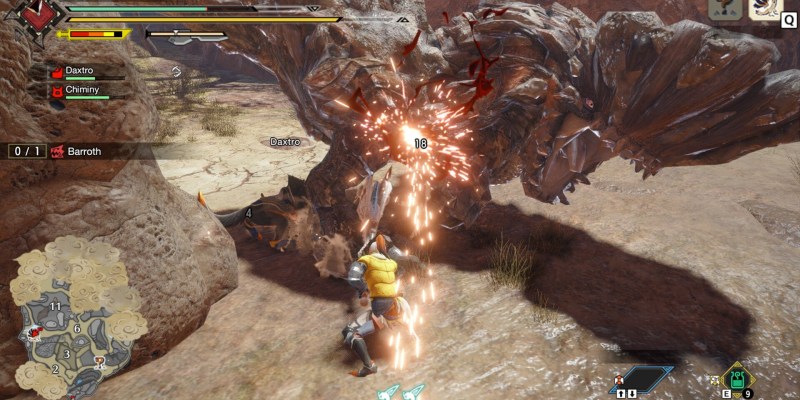 Monster Hunter Rise is kind of weird when placed directly beside Monster Hunter World. There’s more variety to the monsters, but the game doesn’t demand nearly as much of your time. It’s also a port of a Switch game, so it doesn’t look as good as the previous in certain ways. People have been playing World game on PC for a while now, and may find the visual differences jarring. The game itself also feels lighter and breezier, with plenty of new mechanics and lots of the trademark action the series is known for. Rise is also a great port, all things considered. Let’s get hunting.

Right off the bat, the aesthetic of Monster Hunter Rise is decidedly Japanese (even more so than usual). You create your hunter and are dropped into Kamura Village.  A horde of monsters, led by a single super-strong monster that strengthens itself by eating its members, is periodically attacking the village. It’s up to you and, well, everyone else playing the game, to fight them off and keep the village safe. The dialogue outside of cutscenes is unvoiced and the general tone is fairly child-friendly, hewing closer to Monster Hunter Stories 2 than Monster Hunter World.

You can choose between the game’s in-universe language, English, or Japanese for the voice snippets and cutscenes, if you so choose. Despite originally being a Switch game, Monster Hunter Rise does look damn good on PC, even if it lacks some of its predecessor’s visual polish. Textures are high resolution, everything is nice and sharp, and animations are as fantastic as you’d expect. You can notice where the game was held back due to being developed for the Switch, but the series is still in fine presentational form here. The game also comes with all the updates that have been released since it hit the Switch last year in March. 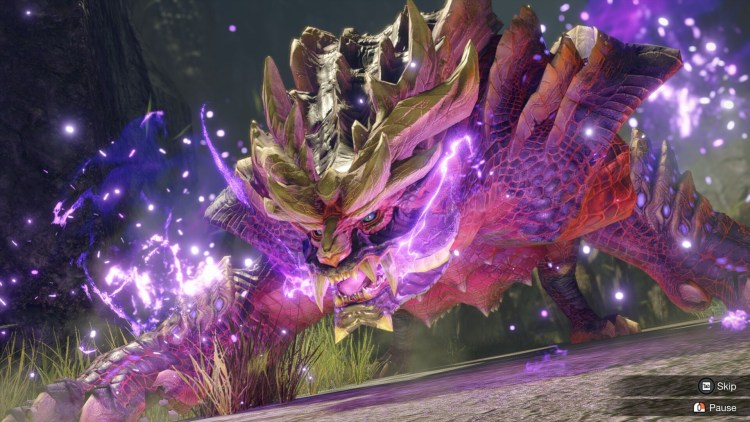 Get to the point

Monster Hunter Rise is a focused game with little to no interest in wasting your time. The story mode of Monster Hunter World could easily take players dozens of hours. Finding monsters once you set off required tracking the thing and then heading towards it on foot. Instead of doing that, Rise basically puts you on a mount and pushes you right toward your prey immediately. Monsters are now marked on the map, with a big question mark on display if you’ve never encountered them before.

Players also have a second AI-controlled buddy backing them. Joining the palico cat characters are palamutes. Yeah, they’re dogs. Ridable dogs. After being dropped at your base camp, you can grab a bite to eat to get yourself certain buffs, as well as take what you want from the quest item chest. You then hop on your palamute and set off. Honestly, I prefer the way Monster Hunter Rise handles things. Palamutes are quick and have a ton of stamina, so they’re great for getting where you’re going in no time flat. You can attack while mounted as well, or you can leap off and slam your weapon into the enemy beasts. Whatever works.

You can no longer use a grappling hook to sling yourself onto monsters and climb them a la Shadows of the Colossus. The grappling hook has been replaced by wirebugs, which you can use to climb upward or fling yourself at a chosen point. Areas in Monster Hunter Rise are very big on verticality, so you’ll find plenty to see on top of taller points, plus the terrain wildly varies in height. Many environments have deep valleys, often featuring shallow water. 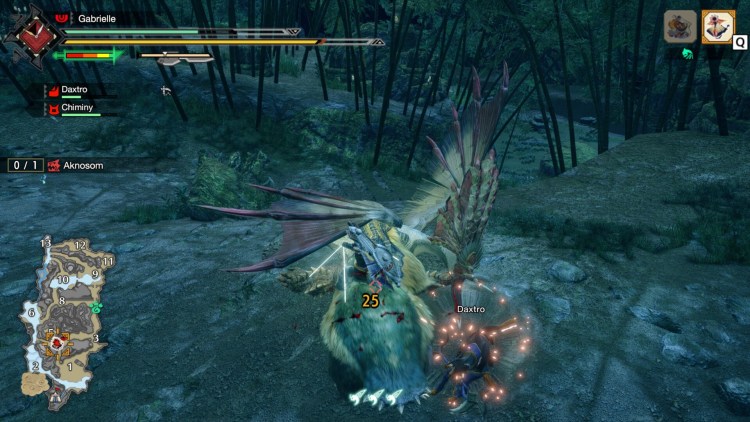 Up on a mountain

While you can’t clamber around and stab away directly on a monster, you can now mount other monsters. Your prey will oftentimes get into territorial disputes with another monster in the area. When this happens, you can mount one of the downed monsters and use it to attack the other. It’s a great way to turn the tables or just do a lot of extra damage. The fact that this can happen whenever a monster turns tail and makes like a tree adds even more layers of unpredictability to the game. Much of the general structure of the zones is intact from World, though.

If you lose all of your life in the field, your monetary rewards will get reduced. Go down three times and you get kicked back to the village. One interesting difference is that quests are divided between solo and group hunts. The solo quest line probably won’t take most players longer than 20 hours. You can’t bring other players with you, but the monsters here are meant to be soloable. Monster Hunter Rise is very beginner-friendly in that manner, which certain folks are less than happy about. Granted, stronger monsters can still knock the tar out of you, but this is a less difficult game than players are used to.

Another great new addition the Rampage, which functions as a special quest where you defend the village’s gates from the horde of monsters. You can put down emplacements that allow you to shoot at the horde, you can bring out bombs, call allies, or just hit them like you’re used to doing. These are fun and feel quite different from the usual flow of the game, which I enjoy. The solo questline may not take all that long, but, boy, does it move. 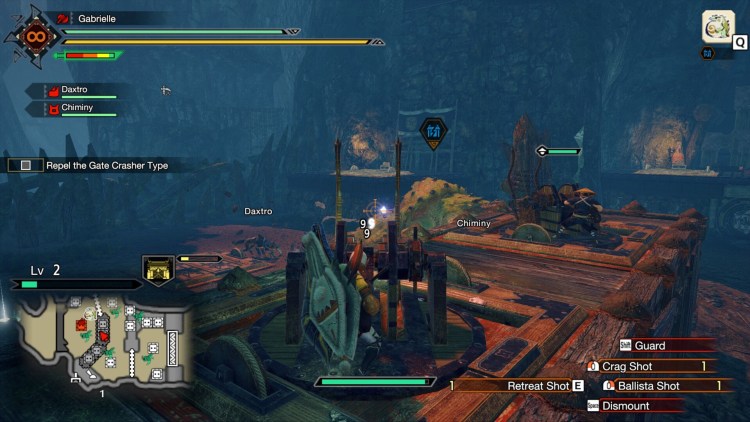 The way questing works is that you have to complete a certain number of missions to progress. You have multiples to choose from, and these include a bunch of new monsters to fight each go-round. While it lasts, you fight new monsters constantly, unless you’re farming older ones to make new weapons or armor sets. Even if Monster Hunter Rise can’t feasibly keep people as busy as World did, there’s still a lot of content here. This is especially true for anyone who wants to complete their armor sets and make all sorts of new weapons, which is always fun. The weapons are so different and each has its own strengths, so I would often find myself going out of my way to try out new builds.

Of course, the group hunts are where it’s at, and the monsters will put up much more of a fight that way. Advanced quests also open up once you finish the main story, which includes recent DLC, so there’s a lot to do. You’ll also be busy crafting accessories to give you the skills you want. Plus, the expansion’s on the horizon, and PC players won’t have to wait nearly as long to get their hands on it. Plus, it’s easy to play at high framerates.

Monster Hunter Rise is another entertaining entry in the venerated franchise that continues to scratch a unique itch. New players will be eased into the franchise and returning players will enjoy hunting with friends as well. Capcom has also delivered yet another good port that definitely makes this version the one to play. 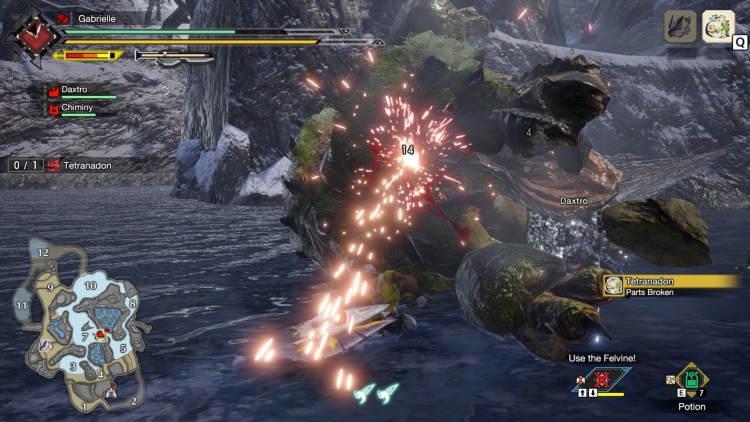 Another good port from Capcom makes Monster Hunter Rise the best version of the game to get.