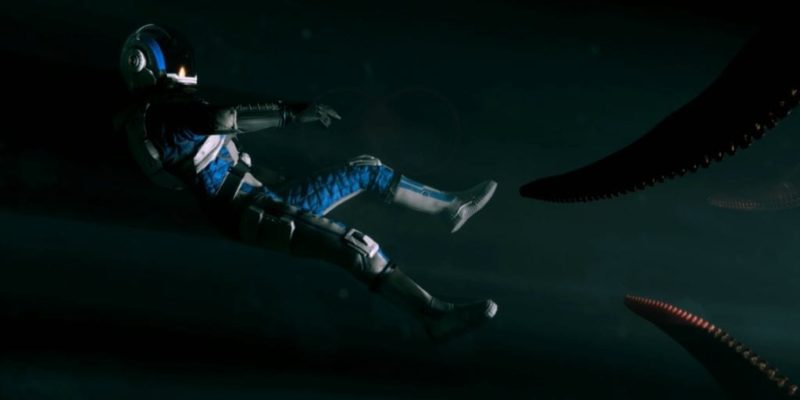 I usually leave the first-person experience to shooters and driving games. Yeah, I’m that person that plays with the camera so low to the ground you can practically smell the asphalt. This all but changed when I sat down to preview Moons of Madness from Rock Pocket Games during E3 2019.

The premise for Moons of Madness has you on the crimson planet, Mars. The main character for the game is Shane Newehart, a technician and part of the Orochi team of scientists. However, instead of being the lead or head on this mission, you are but a low-level aid on the base known as the Invictus. Newehart is unaware of the mysterious message the team is working to decode on the seemingly barren planet.

Right in the feels

The biggest takeaway that I had from the play session was just how developer Rock Pocket Games managed to create suspense in simple environmental designs. Corridors and rooms are at times completely black, consuming the bright fluorescent lights that trail behind you. This led me to believe that, at most times, you may or may not be stuck in the dark forever. 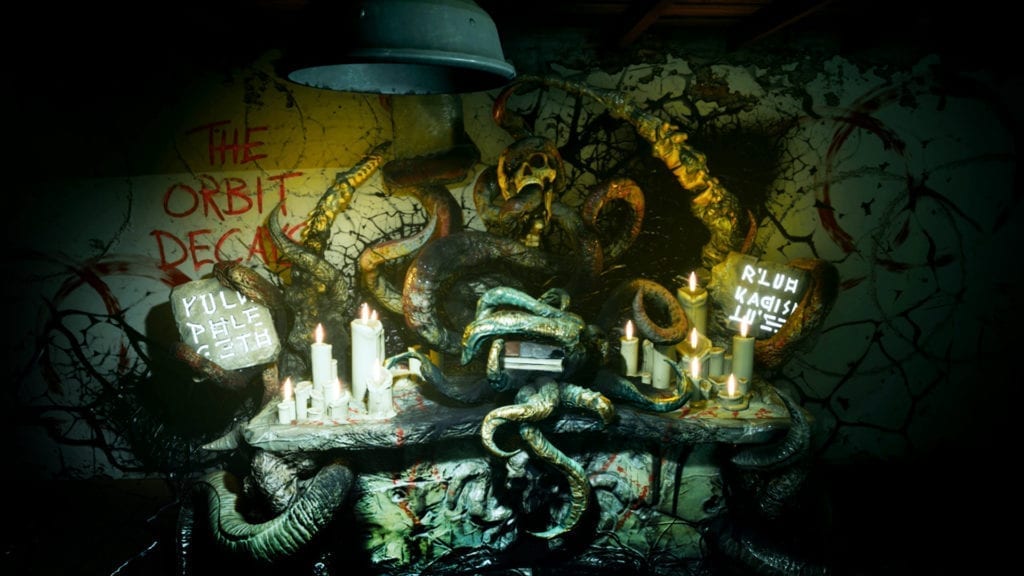 I don’t want to be stuck in the dark with whatever that is.

One simple thing that really stood out to me was when you were able to turn the lights on. This might not sound like a big deal — to anyone really — but when they do flicker and turn on, it comes as a relief. I say this mostly due to the fact that I became self-aware of the psychology behind it, toying with the ups and downs of panic and relief when a room re-surges with power and becomes illuminated. At the beginning of the demo, ghastly visions start to appear on the screen before Newehart is back in his bed, waking up from his vision. Was it a dream?

I’ll go ahead and blame my lack of reading on my utterly short attention span. This is one reason that I tend to shy away from games that have a heavy emphasis on role-playing mechanics, lore, or stats. Usually, when more than a few sentences of lore materialize on screen, that’s where my brain calls it quits. However, the world-building happening around me led me to read the pamphlets, instructions, and even landed me on the treadmill to burn off my caloric intake. I found myself becoming immersed in Shane’s life, even if it seemed mundane. I wanted to explore the research station and find out more about the ghastly thing that had stalked me but moments before.

Over the years, I’ve grown more accustomed to enjoying the thought-provoking puzzles that have been introduced in games. Even ones like Yooka-Laylee, although not a thriller by any means, had some quirky puzzles to enjoy. This is one reason I’ve also grown to enjoy the Resident Evil franchise. Your wits are put to the test in order to figure out the why, all while trying to organize your thoughts and make preparations for the next enemy encounter. This is yet another element that Moons of Madness managed to pull off during the demo by immediately introducing its take on suspense and puzzle-solving. 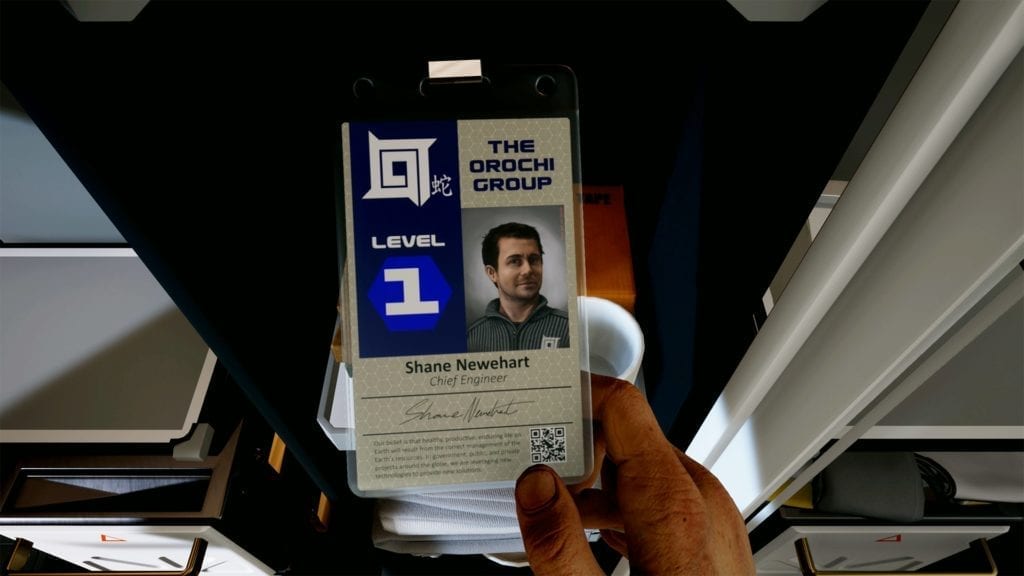 Some of the puzzles seen in the demo were simplistic, like looking at paperwork in order to open the door to your own private quarters. This led to a trek down the hall to restore power and eventually to the green room to relieve it of its flooding. Being that Newehart’s clearance is so low, even this plays a role as to which areas you can access and discovery of the right tools to progress. Do I need this crank? Flashlight? Key card? All of which were items picked up and placed into your scrollable inventory to cycle through.

Fear will find you

As mentioned, during the demo I was tasked with clearing out the flooding from one of the rooms. This created a pathway down into a sewer system, complete with distance echoes that trailed seemingly close behind. This was another area where psychological thriller elements started begging me to question if I was heading down the right path. And if I was, I should probably keep spinning the camera behind me in case something jumps out to grab my ankles.

During the demo, a crowbar was also included in the items you pick up. This seemed like it would be my only defense between me and whatever else was out there. Although this crude tool might be good for opening jammed doors (or a burglary), it was also part of the limited, fear-building inventory to remind you that you were mostly defenseless against whatever was lurking around the corners. 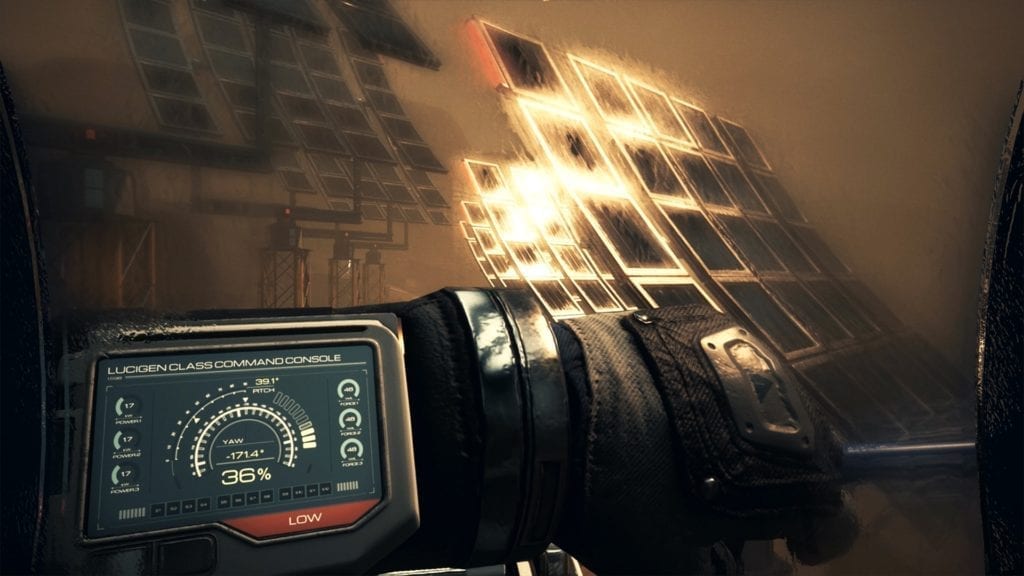 The team at Rock Pocket Games piqued my interest in the short demo. I could tell that a lot of care went into the level design, specifically the elements of suspense that could be cut with a butter knife.

Although I might have normally walked right past this kind of game in the past, it most definitely has me intrigued to learn more, specifically due to the main character, Shane Newehart, being so low on the totem pole in terms of security clearance. He isn’t a hardened demon slayer like in other titles based on the red planet. Rather, the game cues up how he may survive his encounter with whatever else is sharing the hallways of the Invictus. Or, he may just die violently. I’m hoping for both outcomes, actually.

Moons of Madness is slated for release on PC, Xbox One, and PlayStation 4. The game will launch on Oct. 31, 2019, just in time for Halloween.